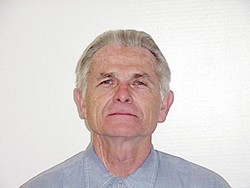 Can a person ever find redemption after participating in murder? Bruce Davis’s supporters think so. Now, apparently, so does a state parole board.

The California Department of Corrections and Rehabilitation’s (CDCR) Board of Parole Hearings on Jan. 28 recommended parole for Davis, a former associate—or “family member”—of the notorious Charles Manson.

Davis, 67, has been serving his time quietly at the California Men’s Colony (CMC) on the outskirts of San Luis Obispo since 1980. He was convicted of two counts of first-degree murder and sentenced to life imprisonment for his role in the deaths of musician Gary Hinman and ranch hand Donald “Shorty” Shea.

Should Davis leave CMC, he plans to join his wife and grown daughter in Grover Beach and possibly find work as a landscaper. He has also been welcomed to volunteer at a local community church.

Davis had been denied parole 25 times and many of his supporters allege he remains incarcerated solely because of the Manson name attached to his docket, even though he did not physically commit any of the murders himself. Some point out that other prisoners convicted of similar—albeit lower profile—crimes have served less than Davis’s 38 years.

Since his transfer to CMC in 1980, Davis has been a model prisoner with a discipline-free record who has completed all available educational, vocational, and self-help programs, according to CDCR spokeswoman Michele Kane. Furthermore, Kane said, Davis has long served as a peer counselor and taught Bible studies.

Davis is not as well known as such other Manson cohorts as Charles “Tex” Watson, Patricia Krenwinkel, and Leslie Van Houten, who remain incarcerated, perhaps because he was not involved in the infamous Tate-LaBianca murders.

Michael Beckman, who has represented Davis at parole hearings since 2006, told New Times Davis was “not a hardcore member” of Manson’s group; that he was in it for the sex and drugs, and saw Manson as somewhat of a father figure after being abused by his own.

Davis was born in Monroe, La. in 1942, raised in Mobile, Ala., and by most accounts had a tempestuous relationship with an alcoholic father. He spent roughly three years at the University of Tennessee before moving to California in 1962, working as a welder.

He first met Manson in 1967 in Los Angeles, and by his own admission was immediately captivated by Manson’s lifestyle and the sense of belonging he found in the Family.

On the night of July 25, 1969, Davis admitted driving three members of the Family to the home of Hinman with the intent of stealing money. Davis reportedly left Hinman’s home, but returned with Manson the next day. Hinman was stabbed to death after the group obtained pink slips for his two vehicles. Though Davis did not participate in the killing himself, prosecutors said his presence at the scene made him guilty.

After authorities conducted a raid on the ranch where the group was staying in relation to a suspected auto theft ring, Manson reportedly thought ranch hand Shea was a snitch. He instructed Watson, Davis and follower Steve “Clem” Grogan to kill Shea. Again, Davis claimed not to have killed Shea himself, but admitted to superficially slicing his shoulder after the fact under Manson’s instruction.

Davis turned himself in to authorities in 1970 and was sentenced to life in prison, the last Manson follower convicted of murder. He served his time in Folsom State Prison until 1980, when he was transferred to CMC.

Through the prison ministry program, Davis met his future wife, Beth. The two married in 1985, when California prisons still allowed conjugal visits between inmates and their families. Davis’s daughter was born later that year. Now Davis simply wants to return to his family in Grover Beach and be a father to his daughter as well as a productive member of society, Beckman said.

“At least at the outset, his goals are pretty modest,” Beckman said of Davis. “He knows there will probably be a certain degree of outcry in the community, but he just wants to live a normal life in anonymity. Hopefully people will realize [he was convicted nearly] 40 years ago.”

While at CMC, Davis earned a masters degree and a doctorate in philosophy of religion.

“I am extremely proud of who my husband has become, I really am,” Beth Davis told New Times. “Over the years, he could have made many different decisions, but he has really turned his life around. In spite of the negative things that have happened in Bruce’s life, I’m glad something so positive has come about from them,” she said.

“He has become a deeply religious man,” Beckman said, pointing out that Davis now uses his role in the prison ministry to actually save lives. “I’ve represented enough life-term felons to tell the difference between someone who uses religion as a way to get out of prison and those who really live it. Bruce has been living it.”

Davis was routinely denied parole before coming within one vote for recommendation at a hearing in 2000. Subsequent hearings had been unanimous in opposition to his release—until January. Beckman said Davis’s attempts to minimize his blame in the past had been a major roadblock to parole in front of previous boards.

“I think what was different was that he has taken full responsibility for his actions,” Beckman said. “In the past, he had maintained that because he didn’t physically kill Hinman or Shea that he was less culpable. This time he admitted to the board that because he was there and present, he was just as responsible as anyone else. And it was the first time he had said it that clearly.”

For someone involved in such a high profile case, Davis has plenty of supporters. People who have sent letters to the parole board on his behalf over the years include a former attorney, a former Nixon aide and National Prison Fellowship founder, and a former State Supreme Court judge.

Pastor Ron Salisbury of the New Life Community Church of the Nazarene in Pismo Beach has known Davis over seven years. Salisbury said he feels Davis has been rehabilitated and to continue to deny him parole would be “pretty radical.” He also said Davis’s experiences could benefit young people dealing with substance abuse and antisocial behavior.

“Bruce is really a great guy—and not bitter,” Salisbury said. “First thing that struck me about him is that, even though he was very young [at the time of the crimes], he doesn’t make excuses.”

Davis would not be the first Manson Family member convicted of murder to be released from prison. Grogan was freed in 1985 after directing authorities to the location of Shea’s remains.

A recommendation for parole doesn’t guarantee Davis will go free. The Board of Parole has up to 120 days to review the decision; Gov. Schwarzenegger has the final say.

In the meantime, Davis’s wife waits to see her husband outside of the CMC perimeter for the first time.

“I tell you, I’m really looking forward to Bruce coming home,” Beth Davis said. “Our hope is to remain involved in ministry and to help prevent other youths from going to prison. We would love nothing more than for Bruce to be able to share his success in the Lord with others and really do some good.”