Koei-Kan Karate is a traditional martial art carefully monitored by an international association to ensure that the form continues relatively unchanged. San Luis Obispo's own Koei-Kan Karate-Do has been searching for a similar stability. Now, the dojo is celebrating its 15th anniversary after years of jumping from location to location and even sharing facilities with other martial arts schools. 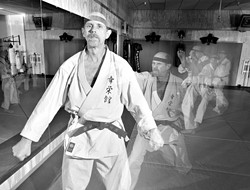 # This strict school of karate, which originated in Okinawa, Japan, more than 100 years ago, has been settled in its current location for more than four years and is now looking to expand.

"I want to have more people know we're here," owner and instructor Larry Rhodes said. "We're one of the few of the traditional martial arts schools in the area."

To help the public become more acquainted with the dojo and the karate form, Rhodes will be hosting an open house for the school's anniversary. Guests will include The Pit and MMA Master Trainer John Hackleman and UFC Light Heavyweight Contender Glover Teixeira. Former UFC Heavyweight Champion (and Koei-Kan black belt) Chuck Liddell is tentatively scheduled to attend.

In particular, Rhodes would like to add more children and teenagers to the program. He's aware that Koei-Kan may be a struggle for young students--but he isn't too worried about it.

"The whole purpose of martial arts for kids is to teach them to focus," the second-degree black belt said.

Koei-Kan is a contact system and a disciplined system that's tough on the body and mind, but parents shouldn't worry about their children going Kill Bill on the neighborhood kids.

"The point of martial arts is to overcome the weak character in your own self," Rhodes said. "A lot of American schools have lost the essence of martial arts teaching [karate] is not kick-boxing."

Koei-Kan Karate-Do's open house will take place on March 1 from noon to 5 p.m. There will be refreshments, demonstrations, and "mini-lessons." For more information, call 543-7222.

Intern Angela Watkins compiled this week's Strokes and Plugs. Items for consideration should be e-mailed to strokes@newtimesslo.com.