Time to grow up: Paso Robles confronts a pressing need to expand emergency services to keep up with demand

He valued the community. He enjoyed the camaraderie within the Fire Department. He embraced the responsibility of supervising fire and medical protection in the fastest-growing city in San Luis Obispo County. 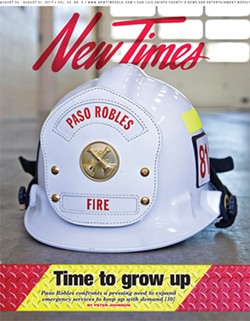 The problem was, Aggson was the only battalion chief (second in command to the chief) in the city, and he worked around the clock.

He worked long days, long nights, and he worked weekends, often driving from his residence in Templeton to an emergency in Paso because there was no one else who could do the job.

"Sometimes I'd get there 10 to 15 minutes after the first engine got on the scene," Aggson said. "That's certainly not ideal."

And it wasn't just after-hours emergencies that fell on his shoulders. Aggson also assumed the duties of a fire prevention specialist, a typically full-time administrative position that oversees building inspections and other fire prevention activities required by law.

The workload was impossible and unsustainable.

"It really was 24/7," said Aggson, who recently left Paso to become deputy fire chief in the city of SLO.

When Aggson left Paso in January, the longtime Paso fire chief at the time, Ken Johnson, well acquainted with the demands on his understaffed department, decided it was also time to step aside and retire after 15 years at the helm.

Johnson had more than once alerted the Paso City Council of the department's need for more resources and personnel—most recently during the 2016-17 budget development—but his requests were met with lukewarm reception and no action.

Shortly before retiring, Johnson told New Times: "I hope that the community truly understands exactly what they've got in terms of service, and, more precisely, what they don't have."

While Paso's City Council members mostly blamed the Great Recession fallout and financial constraints for the stagnation in the department, they also had other spending priorities. After the chiefs' abrupt exits, though, they began to change their tune.

"Our job as the council is to protect our citizens. And we recognize that," Councilmember Steve Gregory said. "We're making those choices now."

The city hired an interim fire chief and three interim battalion chiefs to replace Aggson and Johnson, and it's currently recruiting for a permanent chief to lead the Paso Emergency Services Department in a new direction.

On Sept. 7, the Paso City Council will decide whether to permanently fund those three battalion chiefs, in addition to hiring a full-time fire prevention specialist. It will be the first of several expensive public safety decisions the city will make as it tries to keep up with its own growth.

"It's a pretty formidable schedule of things that need to be done," Mayor Steve Martin said. "It's the Fire Department's turn now."

When Johnson's requests to boost the Paso Emergency Services Department were deemed non-critical and too expensive during 2016-17 city budget meetings, he and Paso City Manager Tom Frutchey realized they would need to work harder to prove the need to the community.

"In my discussions with [Johnson], it was a chance to step back. OK, clearly we're not in the same place as the council, and maybe the community," Frutchey said. "Maybe we need to do some additional analysis."

One aspect of the delay was that Paso had its sights set on several other major projects. The city's undergoing construction on an $18 million tertiary water system. Roads needed repairs. The police department got more sworn officers to combat drugs and gang-related crime. Emergency services fell down the list.

Paso's interim fire chief, Phil Garcia, said that the needs and nuances of the emergency services field are difficult for the public to understand and can be taken for granted.

"There is this perception anywhere in the USA that when the fire engine pulls up, everything's going to be taken care of," Garcia said. "Most people don't understand what's behind it. Just because there's a fire engine and two guys get off, doesn't mean we have all the resources that you think."

Another part of the mentality about the Fire Department, Frutchey believes, is tied to the history of Paso Robles. In the early 2000s, Paso made the transition from being an all-volunteer fire department to a professional one. Then, its population shot up from about 24,000 to 31,398. In 2016, with more 3,600 calls for service, the city surpassed what was previously predicted for 2020.

Last fall, Paso hired a consultant, Citygate Associates, to conduct an evaluation of the department.

The review found that the department's 2016 staffing levels were "seriously insufficient" for a city of its size. While the city's general plan sets a minimum standard of 0.8 firefighters per 1,000 residents, Paso had 0.67 firefighters per 1,000 residents last year. That fell behind other local cities like Atascadero at 0.8, Morro Bay at 0.9, and SLO at 1.1—and was well below the international standard of 1.59.

In addition, the study pointed out that Paso spends only 12 percent of its general fund on the department, while cities of comparable sizes typically spend between 20 and 25 percent.

Operationally, Paso has only two fire stations and two fire engines staffed by three firefighters apiece. That level of staffing meant there were 446 instances (1.2 per day) in 2016 when a resident dialed 911 and both the city's engines were tied up at other emergencies.

"The dispatch is sitting there thinking, 'Oh crap, I don't have an engine to dispatch,'" Frutchey said.

While Paso has mutual aid agreements with Cal Fire and the Atascadero Fire Department, those crews are usually 20 to 25 minutes away, Garcia said. And because the agreement goes both ways, Paso's crews are required to respond to calls in Atascadero when they're needed. As such, Paso failed to meet its response time standards in 2015, according to the consultant's report.

As the best industry practices evolve, the demands on any fire agency's resources are also increasing. The latest personnel standard for fighting a single structure fire is 15 firefighters—numbers that Paso doesn't have. New high-performance CPR involves five EMTs and takes 20 minutes. But it has a 60 to 70 percent survival rate.

Garcia came on as interim chief to help stabilize Paso's department, having recently retired from a firefighting career spanning Culver City, Santa Ana, and Sonoma Valley. Garcia said Paso has quality employees who want to do more than they're staffed to be able to.

"You have one person and the person's wearing 15 or 20 hats," he said. "They know what needs to be done, but they're kind of frustrated because they don't have the positions to be able to do it."

Today, the structure of the department looks a lot more like it's supposed to, with three rotating battalion chiefs serving under the chief. The next decision is to permanently fund those positions and add a full-time fire prevention specialist.

"We have mandated inspections that need to be done, and they're not being done because we haven't had the personnel to do it," Garcia said.

The subsequent step in 2018-19 is to bring in a "squad" vehicle, or an ambulance, with two more firefighters. More than 70 percent of Paso's emergency calls are medical-related and all sworn staff are trained as both firefighters and EMTs.

Then, in 2019-20, Paso will have to deal with the need to build and staff a third fire station in the northeast region of the city, where the majority of its growth is taking place.

The total price tag for the upcoming additions, not including the new station construction, is calculated at $2.3 million per year—or about 10 city manager salaries.

"Emergency services come in much bigger funding chunks than a new recreation supervisor," Frutchey said. "That's part of [the challenge]."

Before Proposition 13 passed in 1978 and capped property taxes, public safety in cities could easily be funded through a simple adjusting of tax levels.

Without that mechanism, and as the costs of public safety continue to rise, agencies have to look elsewhere for funding.

That can be dicey, as SLO County saw in 2016 when Cayucos residents rejected a proposed fire parcel tax increase to pay for its fire department. That department is now in the process of dissolving.

For Paso, the most promising, growing revenue source is tourism, which already accounts for nearly half of all city revenue between transient occupancy taxes (TOT) and sales taxes.

Today, there are 1,415 hotel rooms in Paso generating $4 million per year in TOT. An additional 418 hotel rooms have been approved by the city and are awaiting construction. Another 757 rooms are in the permit approval process. While many residents grumble about that development, Paso leaders say the tourism industry is critical to the health of the city.

"One of the advantages of tourism is people from outside of the area help you pay the bills," Mayor Martin said.

Paso estimates that the approved-but-not-constructed hotel rooms will bring in $762,850 in annual TOT revenue. The yet-to-be-approved rooms represent another $1.4 million. Fire officials look at that revenue as opportunity for the Emergency Services Department.

Frutchey is bringing the City Council an updated fiscal forecast on Sept. 7 that will better account for that future revenue. The numbers presented at recent budget meetings have been conservative, since the hotels and RV parks aren't actually up and running yet.

"It's kind of a more complex version of 'don't count your chickens before they're hatched,'" Frutchey said. "Since then, some major projects have shovels in the ground."

More long-term funding options for the department include community facilities districts in new neighborhoods; a sales, parcel, or TOT tax increase; and fees collected from the department's building inspection program. Development fees paid for by builders contribute to new infrastructure, like the new fire station, but not to personnel costs. 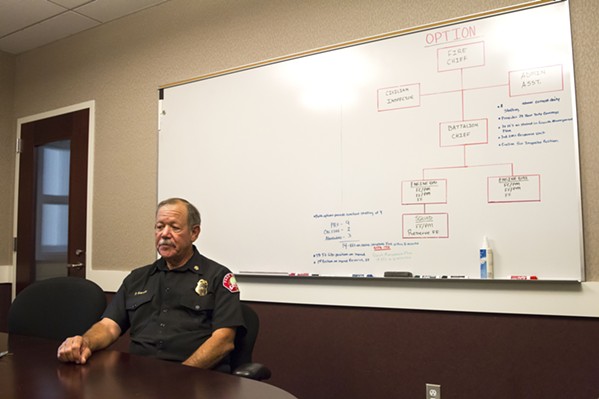 As Paso grapples with its emergency services challenges, some community leaders have also raised concerns about the emergency response coverage throughout North County.

SLO County contracts with San Luis Ambulance, a private company, for ambulance services countywide (except the North Coast, which has its own district). The company deploys four ambulances to cover roughly 1,200 square miles of North County. They're stationed in Paso Robles, Templeton, and Atascadero. In Paso, while the Fire Department is trained to administer advanced life support, the city depends on San Luis Ambulance to transport a patient to the hospital.

"We've met and talked with Supervisor Peschong. He's working on it from his angle," Gregory said.

County Health Agency Director Jeff Hamm said that San Luis Ambulance has so far met its North County response time standards in 2017, which are set differently for each community based on population density. Response expectations to "urban" areas (like Paso) are 10 minutes, while response to "remote" areas (like the Cal Valley) are an hour.

"We obligate the ambulance company to respond within response time standards. It really doesn't matter whether they have X or Y number of ambulances on duty," Hamm said. "What matters is if they meet the response times."

But Peschong indicated he'd be interested in re-assessing those standards. During the county's most recent budget talks in June, Peschong lobbied for additional sheriff's deputies in the North County, citing slow response times to communities like Shandon and Lake Nacimiento.

"It's public safety in general," Peschong told New Times. "I'd go to bat for more ambulances in North County."

For Paso, the central city in North County, it's now about orienting the Emergency Services Department toward the future. The city anticipates a buildout to 44,000 residents, or about the size of SLO today. If the next 20 years goes anything like last 20, there'll be more.

"This is something we have to commit to doing," Martin said. "It's time we need to bring this forward as the public safety element that it is." Δ