Society's Child puts the pedal to the metal

Marked by the twin guitar attack of Joshua Smoot and Kevin Fusion, Society’s Child nearly bellows and belches out hardcore rock’n’roll. The monster-like quintet keeps pounding throughout this new record, which is guaranteed to get headbangers’ noggins bobbin’.

“Meant for Me” delivers more blistering rock before the mini album concludes with the title track “Alive Again,” another aggressive yet melodic rock rager with flame-flickering-quick guitar work and more gritty vocals via Hart.

The group’s been touring up and down the coast with some high-profile L.A. gigs, and listeners of local station Nu Rock 107.3 FM voted them among the 10 top SLO County bands, leading to an inclusion on the station’s SLO & Dysfunctional Vol. 8 compilation CD.

Basically, if you want your face melted off, this is your band. My question is: Will they be able to keep their name if they blow up? A quick glance through a “Society’s Child” Google search reveals a crapload of Society’s Childs, from a Seattle-based R&B band to Petaluma-based blues and classic rock act to an Okalahoma-based classic rock and metal act to folk singer Janis Ian’s song “Society’s Child (Baby I’ve Been Thinking),” a 1965 tune about the then-taboo surrounding interracial romance.

Anyhoo, check out SLO’s own Society’s Child on Friday, July 1, at Mongo’s and next Thursday, July 7, at Downtown Brew in Paso Robles. 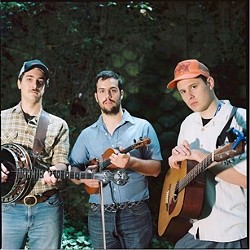 One way to get yourself in the patriotic spirit is to listen to some good, old-fashioned American music, and The Water Tower Bucket Boys will deliver the same in spades on Saturday, July 2, with a 6 p.m. concert in the Red Barn in Los Osos (all ages; 5 p.m. potluck; $10 at the door).

The Oregon-based, high-energy, indie-bluegrass act takes a “no-holds-barred approach to bluegrass music as they share the joy and exuberance of American folk traditions with a new generation,” said press materials.

“Old Crow Medicine Show, who we are big fans of and have influenced us a lot, have been instrumental in our career,” said one of the band’s multi-instrumentalists and co-vocalist Kenny Feinstein. “Gill Landry [from Old Crow Medicine Show] gave us an exact busking route from North Carolina back to Oregon that we followed town for town, bar for bar. He’s known as the king of busking in our circle, and we were grateful for this ‘secret’ route. He taught us about little bars in tiny towns that would profit well for us. Every turn on Gill’s map was an exciting and fruitful venture.”

“Water Tower is about trying to defy definition,” added banjo-guitarist and co-vocalist Cory Goldman. “We’ve been shifting around stylistically as long as we’ve been a band and are continuing to evolve. It’s about being true to our roots but also not being afraid to experiment and push forward.”

“Our sound is loosely based in the traditions of old time, bluegrass, punk rock, blues, Cajun, and country,” explained Josh Rabie, the band’s third multi-instrumentalist and co-vocalist. “We pride ourselves on tight, three-part harmonies and powerful instrumentals. And when we were recording with Mike, we really just wanted to capture all that energy on record. I think we accomplished it.”

Check these guys out, and bring a few extra bucks to buy their album.

Last year they released their eighth studio album, Uni-5: The World’s Enemy, but I heard that due to some internal conflict, Krayzie Bone and Wish Bone have officially left the group. Flesh-n-Bone announced he, Bizzy, and Layzie were planning to keep touring and release another album. Meanwhile Krayzie and Wish are working with artists on their own label, The Life Ent.

In any case, best known for their fast-rapping style and harmony vocals, the group came to prominence in 1997 with their Grammy Award win for Best Rap Performance with their song “Tha Crossroads.” Now some 50 million records later, their future remains uncertain, but you can still see three of them on Saturday, July 2, at SLO Brew (7:30 p.m.; 21-and-older; $33 presale or $35 at the door).

Father-son combo Patrick and Michael O’Hara, aka The Young Ireland Duo, headlines Steve Key’s Songwriters at Play songwriter showcase on Thursday, June 30, at The Porch (6:30 p.m.; all ages; pass-the-hat). The first- and second-generation Irish act draws on Irish folk tradition, relying as much on the storytelling as the instruments. “Our ballads reflect the spirit of the Irish struggles and traditions from the 1600s to the modern day,” said the duo. 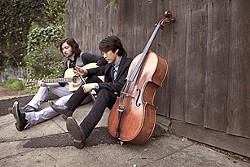 The next showcase at Sculpterra on Sunday, July 3 (1 p.m.; all ages; pass-the-hat), features Oak and Gorski, and their “cello rock.” Together since 2005, Ken Oak and Ed Gorski have self-booked 10 national tours, sold more than 30,000 albums, and secured numerous TV and film placements such as the Dreamworks’ film She’s the Man, Lifetime’s A Nanny’s Secret, and CSI: NY.

Finally, Key’s last showcase of the week is a tribute to The Boss, Bruce Springsteen, at Kreuzberg on Tuesday, July 5 (6:30 p.m.; all ages; pass-the-hat). Who knows? You might hear “Fourth of July Asbury Park” and “Independence Day,” among other Springsteen classics. Every performer will be the featured act, doing three songs each by Bruce: Shannon Savage of That Evening Sun, Sebastian Luna of the Johnny Starlings, Bill McClintock, Gary Garrett, Lenny Blue, Simon Crafts, John Sandoval, Craig Louis Dingman of Code Blues, and showcase host Steve Key.

Looking for something different? Original guitarist-composer-improviser Goh Kurosawa and his trio Sharp Three, which features Kai Kurosawa and Chuck van Haecke, will present what they call “Japanese soundscapes injected with progressive jazz concepts and creative rock grooves” on Thursday, June 30, at 7:30 p.m. in Paso’s Faultline Music.

Austin-based alt-country artist Bennett Jackson plays Frog and Peach on Thursday, June 30. “I’m touring in support of my new EP Ranchera, and this will be my group’s first appearance in SLO,” said the former Santa Cruz resident. Get countrified!

Spanky of Three Legged Dawg dropped me a line to tell me about some new ongoing gigs. “I’ll be playing the new Pismo Brewing Company on Pomeroy on Thursdays, including Thursday, June 30, from 5 till the beer stops pourin’ (about 8 or 9 in laymen’s terms). I’ll be playin’ songs you forgot you wanted to hear on guitars, banjos, and ukulele. I’ll also be pickin’ things up down at Fin’s in Grover beach on Saturdays, including Saturday, July 2, from 5:30 to 8:30 p.m. all summer long. It’s a great place to catch the sunset and enjoy happy hour prices till close.”

Famous Jazz Artist Series co-founder Charlie Shoemake has another regular jazz gig for you. Every Saturday night, starting Saturday, July 2, he’ll play vibes with a rotating line-up of guitar and bass players from 7 to 9 p.m. in Atascadero’s The Bru Coffeehouse (5760 El Camino Real; 464-5007). The cover is $12.

I love their band name. I mean, Devastating Karate is a freaking awesome moniker! They recently released a new EP, Pajarito Plateau, “a small slice of American Southwest carved out by country-punk band,” as their press materials say, adding that the recording shares “stories from the shores of Venice Beach, to the high desert of rural New Mexico, back to the shackles of Tucson’s Pima County Courthouse,” serving up “dusty folk tales of modern times.” If you dig Wilco, Kings of Leon, Devo, Ween, and The Pixies, you’ll enjoy Devastating Karate’s equally rambunctious, visionary, eclectic style. Hear their semi-acoustic set at 7 p.m. at Sally Loo’s ($5) and their electric set at 10:30 at Frog and Peach on Saturday, July 2.

On Sunday, July 3, do yourself a favor and check out Inner Faces at Coalesce Bookstore (2 p.m.; all ages; $10; 772-2880). The skillful acoustic trio will explore myriad genres and influences such as jazz, rock, classical, and bluegrass. The string band has been a Central Coast favorite since 1990, playing the Live Oak Music Festival and the Mozart Festival, and appearing on National Public Radio!

Linnaea’s Café presents “Drumming the Mythic Heart: An Evening with Storyteller Brian Rohr” on Tuesday, July 5 (8 p.m.; all ages; $10 suggested donation, but no one will be turned away). Northwest storyteller Brian Rohr invites listeners to “follow the sound of the drum to that complex and mythic heart of the story, where we ourselves live, breathe, and dance among the ancient tales.” Expect tales from North America, Tibet, Borneo, Russia, and beyond. Rohr is a writer and healing arts practitioner who trained with mythologist and master storyteller Daniel Deardorff. He’s also an active board member of the Mythsinger Foundation and has shared myths and stories from different cultures to national and international audiences. He fully believes that the old stories are alive, vital, and can inform us on how to live our lives as authentic human beings.

Concerts in the Plaza has the fantastic bluegrass and beyond act Cuesta Ridge playing Friday, July 1, from 5:30 to 7:30 p.m. Hot on the heels of the release of their first studio album, Cuesta Ridge is guaranteed to wow you with harmony vocals and pyrotechnic picking.

Five Cities blues rockers Dr. Danger will present their Fourth Annual Firecracker Boogie on Saturday, July 2, at Biddle Regional Park, located east of Arroyo Grande on the road to Lopez Lake. The event starts at noon and features Dr. Danger, The Cliffnotes, and The Mooks, along with special musical guests in a fundraiser to benefit the Woods Humane Society.

Boppin’ pop rock act Truth About Seafood will get the beach crowd jumping with a free, outdoor concert at Dolphin Bay from 2 to 6 p.m. on Sunday, July 3. The beach, beer, and rock’n’roll? Hells yes!

The Sizzlin’ Summer Concert Series & Farmers Market in Grover Beach continues Sunday, July 3, from 3 to 6 p.m. in Ramona Garden Park with the Appellation Bluegrass Band. Grab a low-back chair or a blanket and kick back to some Americana music from this tight bluegrass group.

Traditional Independence Day festivities in Arroyo Grande will have a 1930s flair on Monday, July 4, as the concert series continues its march through time, presenting a new decade with every concert. This week The Village Band will perform rousing patriotic music and the Celebration Chorus will take attendees on a musical journey back to the 1930s. The South County Historical Society will set the mood with traditional red, white, and blue decorations, period costumes, and barbecue. It starts at 1 p.m. in the Rotary Bandstand in Heritage Square Park in the Arroyo Grande Village.