Tip of the hat: Hats for Hope throws annuual benefit

A  cancer diagnosis must be one of the worst things a person can be confronted with. On top of possible mortality, a cancer patient also has to deal with a million little horrible details, from breaking the news to friends and family, to the exorbitant medical costs, to the ravaging process of chemotherapy. Cancer is a disease that truly affects every part of a person’s life.

Hats for Hope is a charity organization that aims to make that dreadful process just a little bit easier. Its one and only mission is to provide wigs and hats to people who have lost their hair due to cancer treatments. This simple gesture can make a significant impact, according to Hats for Hope board member Diane Martino.

“It just offers a glimmer of, OK, I’m going to lose my hair but I still won’t look weird because I get to wear this wig,” Martino said. 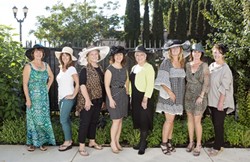 The idea for Hats for Hope came to founder Connie Garcin, a cancer sufferer, at a “hat party” in 2001 that she was throwing for her friends and family who had supported her through her battle. Garcin was determined to leave a legacy by easing the burden of others who were going through the same thing that she was enduring.

And Garcin’s legacy lives on. Throughout the Central Coast, Hats for Hope gives oncologists coupons for hats or wigs; the $100 coupons are redeemable at three wig shops across the county. The oncologists, in turn, provide the wig coupons to patients who are going through chemotherapy. Patients don’t have to ask for the coupons, they are provided without solicitation—just one less thing to worry about, Martino said.

“We’re covering one little part of the whole cancer journey, but it’s very important,” Martino said. “It reassures a person that they can go out there and live that normal life even though they’re going through a tough time.”

A simple wig may not seem like much but, according to Martino, it could give a cancer patient the ability to go through their day without being constantly reminded of their disease.

“Especially for women, no matter where you go you’re forced to talk about what you’re going through,” Martino said. “They don’t always want to talk about it. When they have a wig on they can just look like themselves and just live their normal lives.”

The entire organization is funded by donations, most of which come from an annual Hats for Hope benefit party. The event was based on Garcin’s original “hat party, and includes free food, drinks, and live music. There are raffles for prizes like wine, spirits, and gift cards, as well as a live auction where attendants can win local art or even a trip to Mexico. Tickets are $45 and all of the proceeds go toward wigs and hats for local cancer patients.

This year’s event will be hosted at the San Luis Obispo Country Club on Sunday, Oct. 13. Tickets are available on hatsforhope.com or by calling 489-4161.

According to Martino, the people behind Hats for Hope are well aware that hiding hair loss due to chemotherapy isn’t the No. 1 concern for most cancer sufferers, but the group is doing what it can to bring hope to people with the terrible disease.

“It’s such a small thing, but it’s such a huge thing,” Martino said.

It’s time to gear up for Cal Poly’s annual CultureFest and the school needs it this year more than ever due to some rather embarrassing cultural faux pas last year, like the Colonial Bros and Nava-hoes party. CultureFest has been happening at Cal Poly for more than 15 years. Poly’s MultiCultural center may be starting to run out of clever theme ideas after all that time, because this year’s theme is CultureLand: It’s a Cultural World After All. The free fest will be held at Cal Poly’s Dexter Lawn on Saturday, Oct. 18, from 11:30 a.m. to 5 p.m. There will be student displays, cultural performances, food, and even a children’s area with a petting zoo, bounce house, and crafts. Cal Poly Arts is also offering discounted $10 tickets to the Cirque Zuma Zuma at the PAC on Friday, Oct. 17, in honor of CultureFest.