Tip of the iceberg

A locally invented lettuce variety is now owned by Monsanto

Succulent crunchiness is the first thing you notice when you bite into a leaf of a new type of lettuce that’s just come on the market. Juicy, crispy, and surprisingly sweet, it’s a greener and healthier version of iceberg—and it was invented and patented in SLO County. 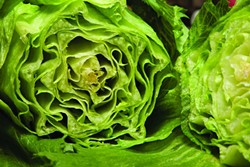 At the end of a street in a quiet residential area of Arroyo Grande is a seed research station where plant breeder Bill Waycott has toiled for years, patiently cross-breeding ancient and modern types of lettuce, never dreaming that the result of his painstaking efforts would one day be taken over by agriculture giant Monsanto.

Now Monsanto has begun marketing the new lettuce it owns, branding it as Frescada and offering it for the last month in Sam’s Club stores in California and five other states. Test-grown in fields in the Santa Maria Valley, Arroyo Grande, King City, and Arizona, it’s a crunchy cross between iceberg and romaine.

“It’s a nice story, and it’s all happened here, with individuals working together to make a more nutritious lettuce and a new experience for consumers,” Waycott said.

With lettuce making up more than 10 percent of all fruits and vegetables consumed in the United States, he said, any increase in its nutrition content has a positive effect.

And unlike some other Monsanto products, this new lettuce hasn’t relied on controversial GMOs—genetically modified organisms—for its success.

Waycott—who said he’s one of only about 50 lettuce breeders in the world—began his quest to invent a healthier iceberg lettuce some 20 years ago, crossing it with a romaine variety developed over thousands of years in the Mediterranean region.

“Records going back to Egypt show that lettuce has been consumed for 10,000 years. Frescoes on pharaohs’ tombs show romaine plants,” he said.

He found romaine seeds from a bazaar in northeast Turkey, in a town on the old Silk Road, to use as a parent in his breeding process.

Perfecting a new lettuce variety has been a slow journey, involving precise selection of traits in each generation of plants.

Waycott has worked on increasing the size of the root mass to reduce irrigation requirements. He helped his plants become resistant to disease by crossing them with a spine-covered wild variety that looks more like an unappetizing dandelion than a tasty salad ingredient. And he wanted an upright lettuce head that would be easier to harvest than traditional iceberg.

Once he succeeded, Waycott patented his invention and the process he used to develop it. That patent is now owned by Monsanto.

Over the years, he’s seen the Arroyo Grande seed research station taken over four times. Originally it was Petoseed, a small vegetable seed business that started as an Oxnard tomato seed company. That merged with a Dutch company, Royal Sluis, then merged again with Asgrow Seeds. Asgrow was bought by a Mexican billionaire’s company, Seminis Vegetable Seeds, which later went into a financial slump and was taken over by a holding firm. Monsanto bought Seminis, and all its genetic inventory and patents, for $1.4 billion cash in 2005, making it the world’s largest seed company.

“We purchased seed companies to access that genetic material,” explained Carly Scaduto, communications manager for Monsanto’s vegetable seeds division. “The majority of our work with vegetables is cross-breeding [rather than GMOs]. Organic growers use seed developed by Seminis. People have their opinions, but there’s a lack of information and a fear that this big giant biotech company is going to take over our food.”

Monsanto has learned how to speed up the process of plant breeding, according to Scaduto. What she calls “advanced breeding” involves mapping plants’ genomes for certain traits, rather than relying on just the way a plant looks to select the ones to breed.

“We located the genome for pungency in onions, and used that to breed for sweet onions. Advanced techniques show us the genome with disease resistance so we can breed for that. We’ve developed [different] colored carrots for gourmet restaurants,” Scaduto explained.

“Obviously, we’re doing something right, because we’re still in business,” she added.

Still, some growers are nervous about the corporation’s ownership of so much of the genetic material in vegetables.

“Seeds are life. And if all that life is owned by one corporation, that’s scary,” said Simone Smith, owner of Educated Gardener nursery in Santa Margarita.

“Should one corporation control the seeds of the world’s food supply? That’s a concern.”

Efforts are underway to counteract Monsanto’s ownership of so many popular vegetable varieties and their genetic material, according to the Organic Seed Alliance in Washington state.

John Navazio, a plant breeder for the Organic Seed Alliance, said Monsanto’s move has been an impetus to develop alternatives that remain in the public domain.

“It’s really galvanized everyone involved in organic seeds to say, ‘We need an alternative.’ More farmers are now interested in farmer-centric seed systems, producing seeds to supply to alternative seed distribution systems,” Navazio said. “We’ve developed a number of varieties that are just as good as the big seed companies’. We distribute them through seed companies that aren’t obsessed with owning things.

“Everything they can do, we can do better,” he continued. “The old-fashioned way of classical plant breeding still works. New genetic stuff pops up all the time; it’s not a finite resource. It’s epigenetics, the evolutionary model, where plants have inborn mechanisms to create new genetic variations.”

Navazio concluded, “Genetic resources are the common inheritance of all human beings. Many good people are looking for models to keep genetic resources in the public domain and not have them owned.”