'Tis the season for PCPA's first virtual cabaret production, Home for the Holidays

Find out more about Home for the Holidays (scheduled to stream on Saturday, Dec. 12, starting at 6 p.m.) and other updates from the Pacific Conservatory Theatre (PCPA) at pcpa.org.

Last November, I fondly remember sitting in the Marian Theatre in Santa Maria watching Yusef Seevers steal the show as Sebastian in PCPA's production of The Little Mermaid. If anyone had told me that one year from then, Seevers would be singing Christmas carols in my living room, I'd accuse them of losing their barnacles.

But alas, here we are in 2020, and Pacific Conservatory Theatre's new virtual cabaret production promises that very notion—at least, virtually.

Home for the Holidays, a live program scheduled to stream on Saturday, Dec. 12, starting at 6 p.m., will feature a variety of song and dance numbers from PCPA resident artists, including Seevers, Kitty Balay, George Walker, Andrew Philpot, Emily Trask, Katie and Annali Fuchs-Wackowski, and others. The show is hosted and directed by PCPA Associate Artist Erik Stein. Stein is also PCPA's casting director.

"Working on Home for the Holidays took me back to a very special time in my life," Stein told New Times. "This is my first virtual cabaret, but my wife and I ran a cabaret theater for a few years with some close friends. We were called The California Cabaret Theatre, and we were located in Avila Beach.

"Over the course of three years we mounted nine cabaret-style shows, and we did everything," Stein said. "We acted, directed, wrote, built the set, made the props, costumes, hung the lights, marketed the show, sold tickets, cleaned the bathrooms."

And while Home for the Holidays marks Stein's first virtual holiday-themed production, he's no stranger to directing and performing in non-virtual, non-cabaret seasonal staples, especially Charles Dickens' A Christmas Carol.

"I've done a lot of Christmas shows, but A Christmas Carol seems to be the show of my career," said Stein, who's worked on 17 different productions of the show, including his first show as a student at PCPA in the late '80s and a Broadway production. 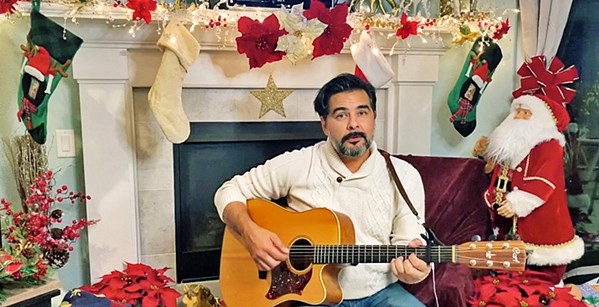 Scrooge would no doubt cry humbug on the yuletide festivities planned for PCPA's upcoming virtual cabaret, which will be free to view (although pre-registration is required). However, donations will be accepted, and patrons who donate $100 or more can attend a virtual VIP reception with the show's performers (check pcpa.org for all the details).

"I've loved working with PCPA's resident actors on this project. I would just mention the morsel of an idea, and they would turn it into a five-course meal," Stein said.

Also joining the featured PCPA resident artists, recent PCPA graduates Brezae Weeks, Etasha Caston, and Capri Campeau will perform during the program, who Stein described as highlights in the show.

"I'd love to mention that we couldn't do this without our amazing musical director, Michael Wilkins, and our editor, Jana Price," Stein added. "So much of the magic of this event is because of these two wonderful humans."

As Home for the Holidays is only scheduled to be an hour long, part of organizing the production was simply a matter of finding out how many song and dance numbers the performers could get away with in under 60 minutes, Stein explained.

"I had some ideas that I put in front of the actors, and they had ideas of things they wanted to do. And then we figured out ways to do as much as possible in one hour," Stein said. "I believe that restraint breeds creativity. Any obstacles we hit as we worked to figure out how to create a virtual cabaret have only made us more creative.

"And it is so much more fun to be creative as a group—especially right now when we don't get to see each other as often as we would like," Stein added. Δ