SLO Rugby is looking for a few good men (and women and youth!)

It’s Saturday, April 20, and I’m at Damon Garcia Sports Fields watching sweaty men crash into each other at high speeds while wearing nothing more than mouth guards for protection. 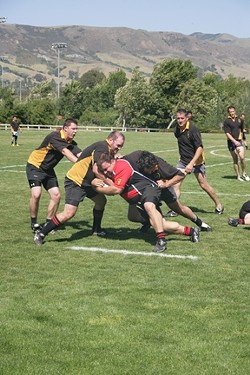 “The older we get, the better we were,” I overhear an older player joking with another on the sidelines.

Then I see my old high school pal, Matt Farmer.

“I’m smart? I have to work construction on Monday? I’m out of Ibruprofen?” he asks, listing plausible excuses.

It’s the annual gathering of SLO Rugby Football Club, aka the inaugural SLO Rugby Homecoming, and there are guys here who played when the team was nicknamed The Grogs and played as a club sport at Cal Poly. In 1976, the Grogs morphed into SLO Rugby, a nonprofit, as the Cal Poly team changed its name to the Mustangs as the university finally recognized them. In the years after, Cal Poly players who ran out their eligibility frequently joined the SLO Rugby squad and continued playing.

In an effort to keep their ranks filled, these stalwart ruggers of yore inspired the creation of the SLO Barbarians Youth Rugby, a youth participation sport open to boys and girls ages 10 and older, who play divided by age.

Reggie Greenwood, director of Youth Rugby, joined the club while still attending SLO High in 1986 as a member of the SLORFC u-19s. He also played for Cal Poly.

“We have youth leagues going in summer and winter,” says Greenwood, a hulking yet affable fellow. “The 15-on-15 games start right after football in November and go until May. In June, we start sevens games, with seven-on-seven games until August.”

Greenwood notes that rugby is returning as an Olympic sport in the Rio 2016 games, “and our youth have the opportunity to be part of that experience. The average 2016 Olympian rugby player will range from 18 to 24 years of age.”

I know what you’re thinking, parents: Rugby is a dangerous, barbaric sport.

“Parental concern for safety is our highest priority,” Greenwood says. “I want all parents and players to understand that there is greater incidence of injury in girls’ cheerleading and girls’ soccer than boys’ rugby, according to American insurance industry statistics. Both Coach Paul Cappellano and myself are IRB/USAR Level 200 licensed youth rugby coaches for ages 8 to 19 years. Unlike most American sports, rugby sets a peer group of responsibility and teamwork. The team learns sportsmanship, fairness, and fostering goodwill towards opponents. After every match, a meal is shared with the team that has traveled to the game. We host such a meal at every home game, and each player can talk with their opposite in a relaxed environment. The ability to accomplish team goals requires total participation in rugby, and your child will learn these positive skills. Rugby players as adults tend to be college educated, middle to upper class, economically speaking, and good citizens overall. Internationally, rugby is played by an elite class of pro athletes, and usually are professionally employed after their careers.”

How’s that for a sales pitch?

Today SLO Rugby beat the Occidental Old Boys from L.A., securing a berth in the play-offs. Since I can see into the future, I know that SLO will win its first two matches before losing last week. There’s now an exhibition game going on between the Renaissance players and the New Age players.

“The Golden Age ruggers are the guys who played in the ’60s to ’84,” Greenwood explains. “The Renaissance players are guys from the late ’80s to 2003 or ’04. Now we’re in the New Age. This is basically an alumni match between old guys and new guys.”

Watching these guys hustle up and down the field is a sight to behold. At one point, Greenwood keeps moving down the field even though he’s dragging three guys with him. Paul “Cap” Cappellano, who coaches the youth rugby, still manages to outrun some of the young guys.

It’s clear these guys are family, and they use their passion for rugby to support other worthy causes like the Turkey Trot and Miracle Miles for Kids. The women’s teams annually play a match wearing prom dresses. It’s all about fun.

After the two matches, everyone heads to the SLO Elks Lodge for a barbecue, and guys who half an hour earlier were locked in mortal combat now chat amiably, because if nothing else, rugby is a gentleman’s sport. ∆