Photos Courtesy Of SLOMotion LEGACY RUNNER Meet Johnnie Jameson, who's run in every LA Marathon since its inception in 1986. The Vietnam combat vet and 40-year mail carrier with the USPS will motivate you with his optimism.

How we treat each other and our world can be one way we define "being human." This Thursday, Aug. 6, local film event company SLOMotion offers up five short films during an online mini film fest appropriately called "being human," which will showcase "films highlighting incredible ways that we as humans can treat each other and face the world" (7 p.m.; $7; at slomotionfilm.com).

"I grew up in SLO, worked in the film industry for the last 15 years, and my business partner, Gracie Gilbert, and I brought our Sundance, Telluride, Mill Valley experience to SLO to start SLOMotion Film," Hayley Nenadal explained in an email. "We are not a film festival. We're [hosting] film screening events throughout the year with strong, meaningful films, music, art, and stories that raise donations for a larger cause. With COVID, we're doing them virtually, but when you watch a screening, you'll see music, films, Q-and-A's—the whole package."

Nenadal and Gilbert's last online screenings were about environmental and social injustice.

"We raised over $1,500 for RACE Matters SLO," Nenadal added. "I want people to know about this because we're doing something uniquely SLO to build community and culture at a time when it's needed most. We're working with other local businesses and building a bigger movement. Our in-person screenings were often sold out last year—650 people at the Fremont!—and we have respectably attracted hundreds of people for our first two virtual screenings."

Each of the five films to be screened are revelatory.

A New View of the Moon is only three minutes long but delivers a big impact. Wylie Overstreet simply took his powerful telescope, set it up on the sidewalk, turned it to the moon, and invited passersby to take a look.

"On my God," and, "No way," were their universal responses. Overstreet narrates the short film, putting in context the unifying experience of seeing a detailed image of our moon as a reminder that we're all on this planet together and that we should "look up."

Alex Gorosh provides the cinematography, and a soundtrack of Claude Debussy's "Clair de Lune" ups the emotional impact. It's simply the most uplifting three minutes you can experience.

Katie is just under 10 minutes, but in that short time it captures the essence of Kathryn "Katie" Louise Lee, a true free spirit. She was a budding Hollywood starlet but bored to death with it when friends with Mexican Hat, a Grand Canyon river tour company, invited her to come along and sing for the guests during tours.

She quickly fell in love with the canyon, the river, and the natural beauty around her, and she also found something to believe in when the Glen Canyon Dam was proposed. She fought it tooth and nail, and she lost, but discovering Katie Lee and her spirit is to be reminded that fighting the good fight and losing is far more inspiring than simply giving up.

Directed by Ben Knight, the short film is filled with marvelous archival footage and stunning still photography, including artistic nudes of Lee, who's a very sassy old lady. When the film opens, she begins, "I'm ashamed to be part of the human race. They're so fucking stupid."

Greg Kohs directs the charming 11-minute film Cowtown, which looks at the oldest weekly rodeo in the U.S. located in—get this—New Jersey, just a few miles from the turnpike. It's a film about tradition and family, which for family patriarch Howard Grant Harris is a helluva lot more important than money.

Through archival footage, we meet Harris' father and grandfather who started Cowtown, as well as his daughters Katy and Courtney. Katy and her husband plan to take over the operation along with their young son, making it a five-generation tradition. If you can set aside whatever your feelings are about the ethics of rodeo, this film will resonate about the importance of integrity and family. 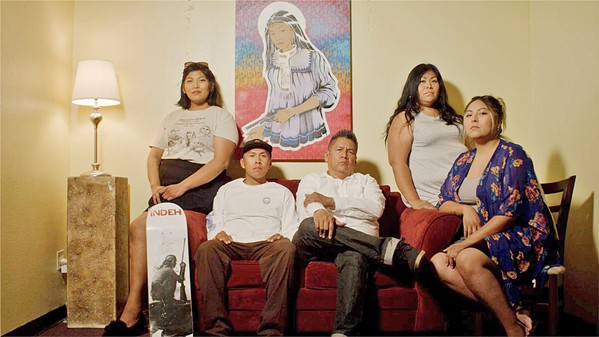 We meet nationally known artist and community leader Douglas Miles, founder of APACHE Skateboards. Family, community, and an understanding of the repression Native Americans have lived under since colonization is always on the minds of the young people touched by Miles, whose goal is to inspire the Apache population and remind them of their fierce and enduring power.

Interviews with members of the Apache community help deepen an understanding of what it means to be a Native American in occupied territory.

The festival's final film, directed by Vincent Deluca, is Mile 19 (10 minutes), which introduces viewers to 60-something Johnnie Jameson. As the film begins, the screen reads, "Since the inception of the Los Angeles marathon in 1986, 178 runners have completed every race. They are called Legacy Runners." Johnnie Jameson is one of those legacy runners, and what a character he is.

The first year he ran in 1986, he came in dead last ... but he also ran the race backwards! The next year, he ran it again, backwards, and on his third year, he dribbled a basketball the entire race.

Viewers also learn that he's a Vietnam vet drafted and sent into infantry combat in 1968, an experience that continues to haunt him, but he's not a complainer. If this film and Johnnie's story and attitude don't inspire you, check your pulse. You may be dead.

These five short films, as a collection, will remind viewers that we can build, inspire, and uplift. We may not always be successful, but our will to go on and do better is what being human is all about. Δ