To keep the interest in reading alive, one local woman hosts book parties for kids

Liz Krieger lives on Islay Street in San Luis Obispo in an olive green house with plenty of shrubbery out front. From the sidewalk it looks like an ordinary home in the neighborhood.

But that feeling quickly fades the minute she opens the door. It's like unlocking the gate to the Narnia of books.

Every spring, Krieger welcomes teachers and classes into her home for book parties. Teachers who can't bring their classes on a field trip to Krieger's home go on their own to pick up as many books as they can for their students.

On April 9, the first class of the year is scheduled to arrive at her home to get its book fix. About eight volunteers organize fruit plates, get books ready, and set up a lunch area for the kids.

"These books are treasures," Krieger says as she moves about her house in preparation for Christina Olson's fifth grade class from Hawthorne Elementary.

The party will include lunch for the students (pizza, fruit, and cookies), a book reading, an open book discussion, and an endless supply of books. Krieger moves colorful library carts around her house for students to pick books from.

But those aren't the only things stacked with literature. Bookshelves, cupboards, and bins full of paperbacks and hardbacks spread throughout the house, and all of them are organized by category and series.

Krieger has books about everything from the ocean, dance, musicians, dinosaurs, and those by particular authors such as C.S. Lewis or J.K. Rowling. Her goal is to have something for every child who walks through her front door. 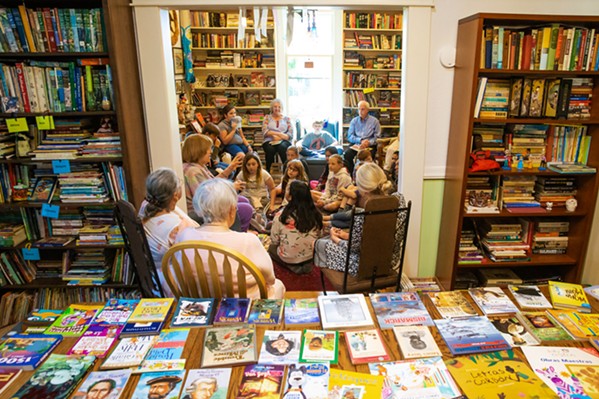 Krieger taught history and government at Notre Dame High School in San Jose. From there, she and her husband, Dan Krieger, moved to Davis, where she served as the librarian for the Travis Unified School District (on Travis Air Force Base) for four years. When the pair reached San Luis Obispo, she became the librarian for the San Luis Obispo Library, where she worked for 33 years.

One of the things she says she loves about her career experiences is that some of the places she worked were rich in diversity.

"One of the great things about ... the Air Force was that there were teachers of every race and ethnicity. Black, brown, and Asian; it was just so lovely to be around so many different people," she says.

As she instructs her volunteers to place seats in a circle for the incoming class, she says that one of the most important things for her is that students keep their own culture and also get the best of everything else. She believes they can do this through reading.

But she didn't always have a love for books. When Krieger was growing up with five other siblings and a mound of books as high as the ceiling, she says, she wasn't the best reader.

"When I was mad at my parents, I would tell them, 'I'm going to have a big house with one book in it.' And I didn't care what it was," Krieger says with a smile. 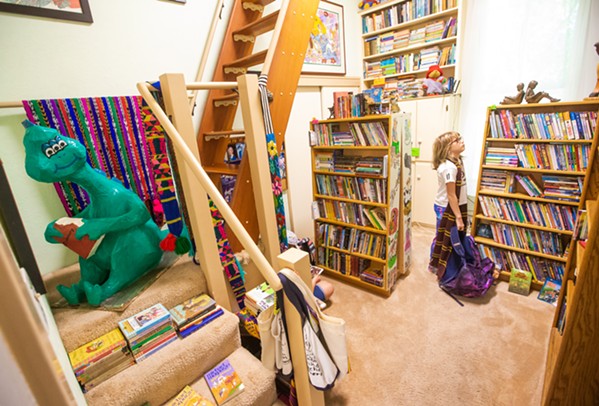 In the kitchen, Zoya Rihal is putting together fruit platters for the kids. She's been friends with Krieger for about 50 years now. They met after Rihal moved to the United States from India in 1967 and then moved to SLO two years later. Rihal began taking her children to the local library, where she began a friendship with the librarian, Krieger.

When Krieger retired and started the book parties, she looked for authors and community members from different cultural backgrounds to read books or give talks to the classes. Rihal was one of her speakers.

"I talk about Gandhi, books like Arabian Nights, clothes, and even toys from India," Rihal says.

The kids are so blessed to have someone like Krieger and her husband, who go to book sales and gather donated books for them to have, Rihal says. More specifically, she says that she appreciates the emphasis that Krieger places on finding books that tell stories from people of other cultures.

"This is the age when the kids want to learn about different things, and the more we expose them to the world, the more their horizon grows," she says. "I get goose pimples of the happiness here."

Once the class arrives, the students take off their shoes and place their backpacks under some tables.

The kids excitedly crowd around her and make their way to the living room where Krieger and other volunteers read an excerpt or two to the students. Once the open discussion is over, Krieger hands each student a bundle of books labeled with his or her name.

This is the first time Olson, the fifth grade teacher, is attending the event—it's her first year teaching at Hawthorne. She says Krieger sent out an email to the elementary school asking teachers to sign their class up for the party. The email included a survey for students to fill out so Krieger could compile each student's personal bundle of books (with the help of her granddaughter Lizzy).

"It's nice for a lot of them who don't have access to books, their family might not be able to afford them, or they aren't able to go to the library," Olson says. "Also to be welcomed into a member of the community's house and being provided food, it's just something [the students] look forward to."

She's also noticed how passionately her students talk about books and reading, which she attributes in large part to these book parties. Getting kids excited about reading in the classroom is still something teachers are trying to figure out, Olson says.

As the students are left to roam from room to room in Krieger's home, they recommend books to each other, look at the book covers, and talk to the volunteers.

"I'd say that books help us when we're down; they help us to see new things, and they help us smile," Krieger says. Δ