To scrap or not to scrap

The city and a new gallery butt heads over a faÁade

A quick walk past Dwellinart, the new Garden Street art gallery, is enough to show that trouble is brewing between city officials and Michael Ackerman, the gallery's owner. The windows are covered in flyers asking passersby to "HELP Dwellinart" and advising them to support the building's new fa¡ade in the form of letters and e-mails to city officials and media representatives. And people are responding sending a flurry of e-mails in an attempt to protect the gallery from the city's supposedly fascist manner of dictating the aesthetics of private businesses. There is, however, another side to this fa¡ade fracas. 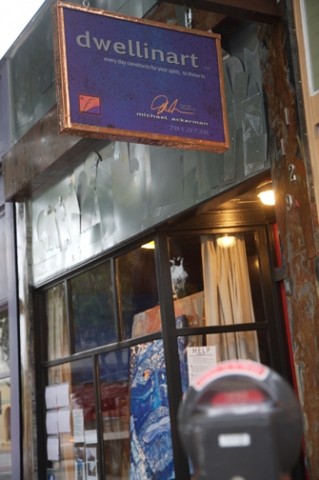 # According to Ackerman, the trouble began on April 16 when he went to the city's planning department to pick up a permit for the gallery's new sign. While he was there, a city employee informed him that an anonymous city official had filed a complaint about his building's new fa¡ade. About two to three weeks before that, Ackerman had begun work on the structure, changing what was once a painted turquoise exterior into a metal-lover's dream with geometric shapes running the width of the gallery and metal treated to look rusted running the length. The entire project took about 60 hours of work and cost an estimated $1,000.

"All the businesses here on the street watched it go up, and they liked it," Ackerman insisted. He's displeased with what he perceives as the city's attempt to dictate what the exterior of his business can look like, a complaint he considers justified by the fact that the city won't tell him who complained.

According to city officials, the problem with the new fa¡ade isn't whether it's safe or aesthetically pleasing. The problem is that Ackerman didn't fill out the necessary forms and permits for the new structure. In fact, though he did file a permit for his new sign, he didn't make any effort to comply with the city's application process for the rest of the changes he made to the building.

"There's technically the rule that if you want to change a light switch or do anything to anything you have to get permission from the city. Technically I ignored the rules of the game by not getting permission," acknowledged Ackerman, who also admitted that part of the reason he didn't go through the legal approval process was that he didn't expect the city to approve the changes he planned to make. Still, the way he sees it, the complaint about his building is more of an effort to force aesthetic homogeneity on downtown SLO than anything else. City officials disagree.

"He put a fa¡ade in the front of his business and the city has a lot of codes about putting new structures up," said Code Enforcement Officer Gene Daily. "There's a due process for that. You have to apply to do that through the city planning department."

After the anonymous complaint was made, the city contacted Ackerman and requested that he fill out an application for architectural review or remove the fa¡ade. On May 7, Ackerman responded by submitting a petition for architectural review with the word "anonymous" written where the applicant's name should be. According to Ackerman, he's complied with the city's request by submitting that application, but city officials insist that he has as of yet to fill out the form.

"I just need him to get in contact with me and get the application filled out," Daily said. "I don't know why he would think he had turned in the application. He just has to go through due process."

If Ackerman does submit an application that the city accepts, due process could take one of several different shapes. The most likely possibility is that the situation will be taken to the Architectural Review Commission, staffed by the city's Planning Department. Ackerman would be asked to pay a fee ranging from $948 to $2,500 for the review process. Because the building is historic and located downtown, the fa¡ade will be scrutinized a little more closely than it would be otherwise. A committee could approve the fa¡ade, give conditional approval, or reject it. This could be followed by an appeal to the city council, though Doug Davidson, deputy director of Community Development for the city, estimates that the entire process could take two or three months from the date Ackerman submits his application excluding the possibility of an appeal.

The process for architectural review involves public hearings where people can express concerns about or support for Dwellinart. The entire situation may ultimately boil down to whether or not Ackerman is willing to apply for architectural review in a way the city deems acceptable. If not, according to Davidson, the city may begin an enforcement process. But that's not something the city is willing to put a timeline on and they're hoping the situation won't escalate to that point.

"If they take the fa¡ade down I'm going to stand back and photograph it," Ackerman said. "If they want to take it, come and get it. Get Mr. Anonymous and put a bag over his head and have him come and take it down. The real issue is how diverse this community is willing to let itself be."