'To those who appreciate wisteria and sunshine'

Enchanted April begins with a beguilingly simple premise: Four bored Englishwomen rent an Italian villa. This description is just vague enough to pique one’s interest. One almost senses the presence of the unknown beneath its innocent simplicity, that perhaps the play’s potency is something that can’t be captured in a simple description, or that some twist would be spoiled if this premise were to be elaborated upon. Or it could simply be a boring play. Ever since encountering a short film with the description “A man named Steve comes to tea,” however, I have maintained a most optimistic attitude toward seemingly ordinary premises. 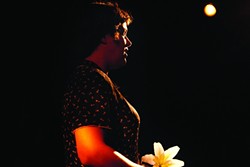 Based on Elizabeth von Arnim’s 1922 novel The Enchanted April, this Tony-nominated stage adaptation by Matthew Barber first debuted on Broadway in 2003. (How much von Arnim’s original story has been modernized in this adaptation, I’m not entirely sure.) Staged at the Little Theatre and directed by Teresa Thuman, a former local now based in Seattle, Enchanted April follows the sweetly naïve Lotty Wilton, played with enthusiasm and childlike wonder by Wendy-Marie Martin. The thing we quickly notice about Lotty is that she’s a little bit loopy in a good way. Lotty has a kind of impetuousness that society has almost, but not quite, succeeded in stifling. In her otherwise orderly life, this merely manifests itself in slightly inappropriate outbursts, which make her fellow uptight Londoners exclaim, “Lotty! Really!” with patently British disapproval, and perhaps secret agreement.

Annoyed with her husband Malersh (David Norum) and the rainy sludge that passes for early spring in London—scene changes in the first act are often signified by a prerecorded crash of thunder and a disenchanted Lotty looking out into the audience; the fourth wall becoming a window—Lotty’s imagination is kindled by a newspaper advertisement directed to “those who appreciate wisteria and sunshine.” The ad is for a remote, coastal castle in Italy to be rented during the month of April. Italy! April! Sunshine! Lotty swoons at the idea, delivering a wistful monologue about providence and fate and the distant British dream of seeing the sun again. By the next thunder crash—it’s as if Seattle-based director Thuman is also sick of wet weather—Lotty has made up her mind.

The challenge now is to find three other boarders to share the expense. Lotty approaches Rose Arnott, an unhappily married woman played by Alicia Klein. Despite being put off initially by the forwardness of a near-stranger, Rose lets herself be pulled in by Lotty’s gleeful exhortations. Bonding over mutual marital dissatisfaction, the two place an ad seeking two more women with whom to share the experience. Two extremely dissimilar candidates present themselves: one Lady Caroline Bramble (Angela Hutt-Chamberlin), a saucy socialite whose decadent desperation seems to encapsulate the jazz age; and the formidable Mrs. Graves (Rosh Wright), a stuffy and demanding old lady who knew Tennyson. A wonderful character actor, Wright’s performance is deliciously spot-on, and easily the funniest. She also sports the most authentic accent, owing to the fact that she is, in truth, British. Watching Wright, one imagines that Mrs. Graves’ heart has been rained on every day for an eternity, but that she has soldiered resolutely on with chin held high.

As Lady Caroline, Hutt-Chamberlin is certainly believable, though she plays her character with perhaps excessive bitterness, making it hard for the audience to warm up to her, even after her startling admission in the second act.

A word on accents: They are not universally mastered. Cory Schonauer, as the castle’s landlord, Antony Wilding, struggles particularly in this regard, but with Wright as an obvious exception, much of the cast is guilty of betraying their American-ness at some point. (It’s something about the vowels, and perhaps the letter t, which Americans tend not to enunciate. Both are evident when pronouncing things like “hot water” and “not at all.”)

If the play’s vague premise seems to contain a whispered promise of the extraordinary, then the first act largely maintains hope of this. The four women are excellent foils to one another, and the disconnect between them is not only comical but feels like a statement about femininity and modernity and what those things mean in the context of post-war Britain. (I’ve said nothing of the Great War, and the four central characters hardly reference it either, except when speaking obliquely of widows and of living with tragedy. “How are we to go one when so much has been lost?” asks Lotty.)

Women such as Lady Caroline—single ladies who go out dancing, smoke long cigarettes, and drink cognac at 11 in the morning—are admiringly referred to by Lotty as “moderns.” The elderly, entitled Mrs. Graves, on the other hand, is a product of Britain’s imperial century, and a living reminder of the country’s past.

In one deftly choreographed scene, both Lotty and Rose inform their husbands of their plans (Bob Peterson plays Rose’s husband, the duplicitous Mr. Arnott) and their rapidly escalating arguments happen simultaneously onstage, in a mashup of frustration and misunderstanding. Then it’s off to sunny Italy!

Enchanted April has definite proto-feminist leanings (“Husbands! Bah!”), but still feels dated in its overly simple resolution to the problems that would plague modern women for at least another hundred years. For this reason, the second act doesn’t match the power of the first: while Act I diagnoses existential problems with wit and accuracy, Act II tries to suggest such problems would evaporate if everyone just took a little jaunt to Southern Europe, let down their hair, and started peppering their speech with Italian expressions. There are a few surprise guests, the hint of an affair, and several linguistic and cultural misunderstandings with the housekeeper, Constanza (Jean Miller, whose surprisingly good Italian pronunciation should make up for her occasionally awkward timing).

Where the first act had some realism to it, the second is content to be charming and briefly farcical. Lotty even delivers a closing monologue about What It All Means, just in case you had been thinking of forming your own interpretation. But perhaps I am expecting too much from this play. After all, Enchanted April is nonetheless an enjoyable evening at the theater, delivering plenty of gratifying one-liners and lots of laughs on opening night. The trick is not to think about it too hard.