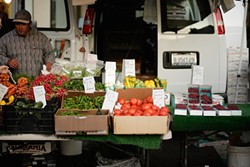 Both sides pledged to communicate better. Everything seems tidy and back to normal now that the boards of the two organizations spent a weekend hashing out a one-year contract they said will ensure the Thursday night farmers’ market in SLO City will continue as usual.

The reconciliation comes after weeks of squabbling between two sides that could not be more different. Well-dressed business owners faced off against farmers, many of whom protested at the city council with dirt under their fingernails from the fields they had worked that day. The public on hand sided overwhelmingly with the farmers. As one city councilman said, “You don’t fool with mom, apple pie, or farmers, obviously.”

The break up began Jan.14 when the Downtown Association told farmers it would take over management of the produce section at Thursday night farmers’ market from the Farmers’ Association in two weeks. The truce between townies and farmers came about only after a blitzkrieg of advertisements bombarded local media. The ads inspired a massive crowd to appear at the Feb. 2 City Council meeting, pressuring a usually docile governing body to “suggest” the two factions compromise. Though Mayor Romero said the council held no real sway in the conflict, the public cramming the chamber reminded the council that the city extracted an estimated $216,000 this year from downtown businesses and gave it to the Downtown Association.

All of the city council members said they had never received so many e-mails and phone calls on any issue.

Immediately after the meeting, a rumor swirled among the audience, city officials, and the city council that Ernie Diladio, a longtime target of the Downtown Association’s ire, had financed the farmers’ expensive and effective ad campaign. A few days after the meeting, the San Luis Obispo Chamber of Commerce sent an e-mail claiming a certain rancher had financed the farmers’ media campaign. Suspicions were raised because the Farmers’ Association used Barnett Cox & Associates to coordinate the ad campaign, the same agency Dalidio used in the past.

Dalidio denied he had anything to do with the Farmers’ ads, as did Dave Cox, the chief operating officer of Barnett Cox & Associates.

“It’s utter nonsense,” Cox said about the rumors. “Its absurd that anyone would say that.”

The same day as the Feb. 2 city council meeting, a federal judge ordered Dalidio to pay the legal expenses of both the Downtown Association and the Responsible County Development, a company that fought against Measure J, the referendum that cleared the way for the development of Dalidio’s property. Dalidio had sued both entities, alleging unlawful opposition to the development of his ranch just outside the city limits under a Racketeer Influenced and Corrupt Organizations Act (RICO) statute. A federal judge ruled the lawsuit a strategic lawsuit against public participation (called a SLAPP in legal terms) and ruled Dalidio had to pay the Downtown Association $34,687 and $55,883.92 to the Responsible County Development, LLC: $90,570.92 in all. The city gets the Downtown Association’s share: it was still part of the city when the law suit was filed.

Both sides trace the conflict back to last summer when the Downtown Association moved farmers from one side of Higuera Street to the other in front of the renovated Wineman Hotel where the city had extended the sidewalk, eliminating five parking spots. The farmers were consequently required to unload their goods on the other side of the street and park their trucks elsewhere. That may seem trivial to non-farmers but unpacking hundreds of pounds of produce and finding a parking place are serious chores.

“I felt there was no use to me being there,” Jankay explained.

Cash said she regrets the way everything unfolded and pledged to approach matters differently. She said she believes the market will be better for all of the conflict. “When it comes down to it, we all want to same thing,” Cash reflected. “It just made me realize how important Thursday night farmers’ market is to people; how it makes people happy.”

Staff Writer Robert A. McDonald can be contacted at rmcdonald@newtimesslo.com.