Together, going it alone

A Board of Supervisors three-vote majority seems to stick together, whatever anybody advises

Let's begin with a brief civics summary for those who don't pay much attention to local government. 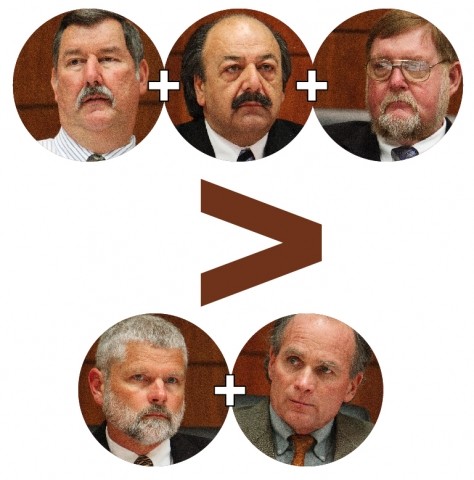 # The SLO County Board of Supervisors is the most powerful elected body in the county, supervising a budget of nearly $400 million and having a say over everything from whether a potbellied pig can be considered a pet to how many psychologists will be on the county's payroll.

Land-use decisions, however, are their most notable power, and it's in that arena that the most rough-and-tumble battles are fought.

Because in SLO County, land use is where the money is. As former supervisor Shirley Bianchi put it recently: "There are billions of dollars that can be made in this county if our planning rules and regulations are broken down."

And lately, she and others allege, they are being broken down.

On matters great and small, a consistent 3-2 majority of the board has been approving projects and developer-friendly policies over the objections of lower advisory bodies, county staff, its own attorneys, and the Planning Commission.

Although the board is officially nonpartisan, and people usually politely call their differences "pro growth" and "slow growth," the split clearly falls along the same party line that divides the rest of the nation's political machinery.

"It's true that three of us are Republicans and two of us Democrats," said Supervisor Katcho Achadjian, "but it would be an oversimplification to say that's what drives our voting."

Instead, he says, the votes split over differences in philosophies.

The three Republican members are Achadjian, Jerry Lenthall, and Harry Ovitt. The two who are registered Democrats are Bruce Gibson and Jim Patterson.

The Ovitt, Lenthall, and Achadjian split--call it OLA for short--has been in place since Lenthall took his seat in 2005 (although Gibson during that period took the seat of Bianchi). Since then, on matters great and small, the block has voted largely in unison, especially on controversial votes, and particularly those involving development.

They've done it through land-use decisions, by granting appeals of items turned away by their advisory boards, and by sidestepping or loosening environmental regulations.

And they've often done it over the objections of those paid or appointed to advise them.

Under the current OLA majority, the board has:

Voted 3-2, against the advice of the Planning Commission and county staff, to allow the group Protect Our Property Rights, made up of landowners and developers, to dictate the Cayucos viewshed policy that governs viewshed protections on the county's tourist-drawing scenic North Coast.

Voted 3-2, against the advice of their own staff, the Planning Commission, and the Agriculture Department, to allow a developer to hire private experts instead of relying on impartial federal scientists to determine if soils are appropriate for one proposed project. The vote will result in houses being built on agricultural land near Paso Robles, and opponents fear it will set a precedent for more of the same.

Voted, against the advice of their own staff and the Subdivision Review Board, to allow a former supervisor, fellow conservative Mike Ryan, to essentially make a legal lot out of a small triangular piece of property that staff determined had been illegally created. His plans were to combine the small lot, bought from a telephone company for $10, with a neighboring 11-acre lot and divide the entire thing into two legal, roughly five-acre lots. The lower body said it would have created lots of substandard sizes and wanted him to go through another process to accomplish that.

But Ryan's representative, land-use consultant Jamie Kirk, argued that it was up to the Board of Supervisors to make the decision, and the three-member majority approved Ryan's appeal over the vehement objections of Patterson and Gibson.

Voted 3-2, against the advice of county planners, to move forward a 350-home subdivision that could increase the population of tiny San Miguel by more than 1,000 people, to 2,600. Opponents said that the project, by San Diego County developer Brent Grizzle, equates to sprawl and would go against the county land use goals of preserving agricultural land.

Voted 3-2, against the county's legal advice, to give a developer a shot at an extension of an expiring option to build 91 lots in Los Osos. The project's plans won approval more than a decade ago, but it was stopped by the area's water-related building moratorium. The option is now set to expire in September 2008, and the county's attorneys say that extending the Morro Shores development would clearly violate state law. Nonetheless, the supervisors voted last month to consider the extension--at a future date.

Voted 3-2 in 2005 to approve a small development in Nipomo, over the objections of county planners, the County Fire Chief, and the Planning Commission, all of whom said it would violate state law because it didn't have an emergency secondary access route.

Voted 3-2 to allow a development northwest of Paso Robles by accepting as valid an antiquated 1800s-era map, despite the contention from the county's top attorney and planning director that many of the lots weren't legal.

Lenthall declined to answer questions about the split. He said that he didn't agree that there was any voting block, but declined to elaborate. Ovitt didn't return a call for comment by press time.

Longtime observer David Garth, who's been president of the SLO City Chamber of Commerce for 35 years and a vocal critic of certain board decisions--the chamber said the board "caved" over the Cayucos viewshed, for example--said that this board isn't much different from any other incarnation, including when the split was ostensibly more pro-environmental.

In general, he said, the SLO County Board of Supervisors tends to lean away from the tenets of smart growth, where growth is confined to cities and unincorporated areas are preserved as open space, because many of the supervisors' votes and supporters come from outside the cities.

Yet others who have been longtime observers or participants in the process say this board is acting differently from past incarnations.

"It hasn't always been this way," said Bianchi, who first took office in 1999.

She said that she's most disturbed by instances where the board has ignored the advice of its own legal counsel.

"In my mind it's an abrogation of their oath of office, basically," she said. "They should be upholding the rule of law even if it means siding against the interests of their buddies."

Indeed, Bianchi was known to split her vote to the point that she upset some supporters by helping broker a deal with the Hearst Corp. that allowed limited development of Hearst coastal land in exchange for large protections.

She even endorsed Lenthall in his previous election, although she is supporting Cal Poly lecturer Adam Hill over Lenthall in this election.

"I happen to be fond of all of them," she said of the majority. "Not one of them is a hypocrite. Not one of them is on the take, and I'd swear on a stack of Bibles to that. They just honestly believe there should not be government regulation of land use."

For his part, Hill said one of his biggest issues with the voting trend is that it costs taxpayers money.

He noted that more than two years were spent dealing with the Cayucos viewshed issue, which has become a rallying cry for opponents of the current majority.

"I would really like to know how much money was spent on that just to give the appearance there was a debate," he said.

There have also been lawsuits to contend with. The Cayucos viewshed decision, for example, has led to an ongoing lawsuit.

Gibson said he's been most frustrated by the 3-2 votes, such as the Cayucos view-shed, that he believes go against the county's General Plan. While each exception may have a small effect, he said, "It's sort of a death by a thousand cuts together they have a tremendous impact."

Gibson took pains to avoid personal criticism of his peers but allowed that being in the minority is challenging.

"Professionally it is frustrating," he said, "because I disagree profoundly with their approach to things on certain issues."

Michael Latner is a professor of political science at Cal Poly who follows local politics.

He said that the split points out that, while they're officially nonpartisan, the board has an alliance formed along ideological lines.

"Clearly these decisions are as political as any decisions," Latner said.

Yet he said that majority-block voting wasn't the sort of behavior progressive reformers had in mind when they made it a part of the state charter that county offices should be nonpartisan.

"Many would argue there should be no Republican way to fix a pothole," he said.

Individuals and groups are increasingly appealing the rulings of lower bodies to the development-friendly board.

According to the County Planning Department, in fiscal year 04-05, there were a total of 16 appeals of decisions by department officers, the Planning Commission, and the Subdivision Review Board.

The next year, under the 3-2 majority, there were 21. The following and most recent year, there were 34.

Those statistics, however, only tell part of the story because they lump together appeals by, for example, developers who didn't get their way, with those of environmentalists upset that developers did get their way.

But here's another statistic that adds to the case: Local environmentalists say that they essentially don't win appeals under this makeup of the board, although they sometimes do win in courts or before the state Coastal Commission.

Andrew Christie, director of the local chapter of the Sierra Club, said that the club has almost never won an appeal before this board.

When asked, he said he could recall just one example where the club has won an appeal under the current incarnation of the board: It was an appeal of a Planning Commission decision allowing a cell phone tower in Los Osos.

And even that one was bittersweet.

Just a few weeks ago, the board voted to allow another cell phone facility, in exactly the same spot.

Opponents of the current makeup of the Board of Supervisors like to make the point that the three-member majority votes in virtual lockstep.

An analysis of just one type of vote finds that, while that's an exaggeration, it's not far off.

New Times took a look at all Board of Supervisors votes on appeals from lower bodies since January of 2005, more than 120 in all. That review found just 14 times when the three-vote majority didn't stick together.

In other words, the three-vote majority won about 88 percent of the time.

The statistics get exaggerated in part because most of the time the entire board votes in unison. Yet nearly all of the votes where the OLA block split apart consisted of Ovitt as the outlying vote.

Achadjian was thought of as a swing voter in previous years, but that pattern has changed more recently. He said that it's because previous incarnations of the board were more "extremist," and this one is more moderate.

"It's not as obvious as it was in the past," he said of his swing voting. "Your observation is correct."

The review was limited to appeals, and didn't include all of the votes before the board. And the tally doesn't include cases where one or the other was not present for a vote.

Lenthall declined to answer any questions about the trend.

"I haven't done a statistical analysis," he said.