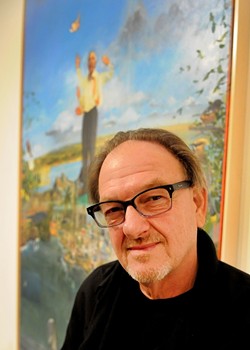 At Tom Wudl’s current exhibit at the Cuesta College* Fine Art Gallery, one painting in particular dominates the space. An oil on canvas work titled The Birth of Jan Van Eyck and the Extent of His Influence on the Art of Painting, for a Period of 600 Years, the painting is not only enormous, but exhaustive; a summation of the medium’s history. Its title is not too grandiose, either. Worlds are in this painting.

Wudl’s exhibit—which hangs through Dec. 13—is itself a kind of summation, an informal retrospective representing approximately 40 years of the Bolivian-born, Los Angeles-based painter’s artistic practice. The earliest piece on display was created in 1972, the same year Wudl exhibited work at documenta 5, the modern and contemporary art exhibit taking place every five years in Kassel, Germany. He’s also been exhibited at Tokyo’s Sezon Museum of Art, LACMA, and the Whitney.

But back to that painting for a moment. Describing The Birth of Jan Van Eyck is a silly idea, but let’s try it—starting at the top, I guess.

Lightning crackles from a black-gray sky, out of which an infant tumbles. (When he painted it in 1988, Wudl used his then-infant son as a model.) Lightning itself could be taken as a symbol of inspiration, or birth—isn’t lightning supposed to have sparked life on Earth?—but I’m already digressing.

Moving down: The sky turns a brilliant afternoon blue. An older man stands at the center of the painting, atop a landmass where a tropical city bustles at his feet, alongside Yosemite’s Half Dome, making any notion of scale or geography laughable. The man gesticulates with six arms, like a Hindu god—or perhaps he is simply in motion.

The city toys with scale as well. Hikers and businessmen tower over skyscrapers, while other people are tiny, scuttling over the beach like insects. That’s right, the beach: The last third of the work is water, growing dark and choppy near the bottom, mirroring the storminess of the clouds above.

Yet this description will hardly do. The Birth of Jan Van Eyck experiments not only with scale but with style. Wudl renders some objects in exacting, liney detail and others with a sort of soft, painterly romanticism. Other facets of the work are not so much romantic as they are Romantic, as seen in the painting’s depictions of the sky and sea as crashing, mighty forces. Birds and flowers frame the painting on either side in a decorative flourish.

Adding to its intrigue is the fact that many things depicted in the piece—like the minute beach people—must be viewed from very close, while the work’s large size requires considerable remove to take it all in. In this aspect as well, the work seems to engage art history itself as a theme: One must examine it on the level of individual lives and works and in terms of movements, continents, and epochs. Zoom in, pull back, repeat. A pulsation. It’s alive.

During his talk at the show’s opening, Wudl explained the inspiration for the piece. At the time, he explained, he had felt surrounded by contemporary ideas about “where art is going” and the next “logical step” in painting (Had everything been done? Was painting dead?). The artist’s concern over these notions coincided with his perusal of an art history book titled Early Netherlandish Painting. The result of this contemplation led him to conclude that art history was not marching toward an inevitable end but was, as he put it, “continually remixing itself.” Thus, another grand remix was born.

So there, I’ve done my best. Pan out a little now. See the exhibit as a timeline, starting in 1972, when Wudl put gold leaf on the funnies section of the newspaper, punched holes in it, and didn’t title it. The resulting Untitled is juxtaposition of precious and disposable elements. He would continue to engage with this idea by gold-leafing paper bags and other ephemera. The paper punch was a mainstay too, until, Wudl explained at the reception, those pieces began to seem more like “design projects” than fine art.

Wudl himself stares intensely out at the viewer, forehead first, in his Untitled (Self-portrait) #2, a gouache and ink piece he created in 1979. An abstract, flower-like design on the bottom half of the piece echoes an earlier untitled painting from 1976.

That work hangs elsewhere in the gallery beside two much later pieces, all of three of them small but potent. A work from 2012 titled The Known Universe #4 is intricately rendered without being fussy. So is Equanimity, a closeup of a flower from his series “Specimens from the Flowerbank World,” a body of work inspired by the Avatamsaka Sutra, or Flower Ornament Sutra, a scripture of Huayan Buddhism. Both The Known Universe #4 and Equanimity also contain tiny clubs—as in the clover-like shapes on playing cards—which are so small they could almost pass for stippling.

The playing card theme is further capitalized upon in the large-scale pieces Queen of Hearts and King of Hearts, both created in 2003. Both works are done on tracing paper, which has been painted, gold-leafed, and hole-punched, giving the pieces a much heavier quality, like tapestries. The classic Queen and King of Hearts are depicted, ingeniously made up of many smaller designs—hearts, spades, diamonds, and yes, clubs.

A small painting titled Sentinel is placed near The Birth of Jan Van Eyck, and one recognizes a similar approach; the toying with specificity, scale, and light. The sky is so dark at the top of the painting one can see the stars, yet this color gives way to a lighter blue, and some of the subjects depicted are flatly bright, as if bathed in direct sunshine.

Speaking of flatly bright, Wudl’s The pageantry of coefficience having concluded: Harlequin celebrates that knowledge which lies beyond the limits of experience was painted with acrylic after the artist got sick of cleaning up tubes covered in messy oil paint, and the piece seems to eschew shading altogether in many places. Garishly colored objects—a blue brassiere dangling from a music stand, for example—are often colored solidly and with clear lines around their edges, like a cartoon. The work depicts a scene in which a harlequin costume and several articles of women’s clothing have been cast about, along with two violins. (At his talk, Wudl asserted that it was him inside the harlequin costume. I don’t know what to make of that.)

Behind this bizarre tableau, a black rectangle, like a chalkboard, contains a sketch out of a Greek tragedy. The chalkboard, if that is what it is, has not been fully colored in; a corner behind a chair is unfinished, as if the chair had literally gotten in the artist’s way.

For a 40 year retrospective, the exhibit is strikingly spare, chosen with precision from a lifetime of art-making. It urges the viewer both to look closely and to consider the bigger picture: step forward, back up, repeat.

*Disclosure: I’m currently taking several (non art-related) courses at Cuesta, so let that filter through your consciousness as you read, if you like.