The last of his kind from the Greatest Generation!

Tony Bennett just celebrated his 87th birthday on Aug. 3, but he still sounds great! I saw him a few years back at the PAC and was blown away by the strength and nuance of his voice, his impeccable attire, and his classy stage presence. Which is why I’m excited to see him again this Saturday, Aug. 10 when he plays the Vina Robles Amphitheatre (8 p.m.; $44 to $129.50).

Bennett is part of The Greatest Generation, as Tom Brokaw named them, and he embodies that generation’s can-do spirit. Born in New York, he fought in the final stage of World War II as an infantryman in Europe (he described the ordeal as a “front-row seat in hell”), helped liberate a Nazi concentration camp near Landsberg, got demoted for eating lunch with a black high school friend (the Army was still segregated then), and when he returned home, he began his singing career, first as a singing waiter, but he soon signed to Columbia Records and started churning out the hits. His first No. 1 was “Because of You” in 1951, and throughout the ’50s he continued to define excellence in jazz and pop singing with albums such as The Beat of My Heart and Basie Swings, Bennett Sings. He recorded his signature song, “I Left My Heart in San Francisco,” in 1962.

The height of the rock era was a low point for Bennett, but he staged a comeback in the late ’80s, where he began to gather fans of the MTV generation with appearances on Late Night with David Letterman and other shows. In 1994, he appeared on MTV’s Unplugged, which resulted in a platinum-selling album. Bennett was back! And he’s not retiring.

“If you study the masters—Picasso, Jack Benny, Fred Astaire—right up to the day they died, they were performing. If you are creative, you get busier as you get older,” Bennett’s been quoted as saying.

To this day, he does between 100 and 200 shows a year, and when he’s not performing, he’s painting. He’s pretty accomplished at that too! This should be a terrific show!

And while we’re on the Vina Robles Amphitheatre subject, don’t forget about their other great shows this week, starting with Lyle Lovett & His Large Band this Thursday, Aug. 8 (8 p.m.; $43 to $83). This country-esque performer pens great songs and has a great, bone-dry sense of humor.

Michael Franti & Spearhead play on Wednesday, Aug. 14 (7:30 p.m.; $38.50 to $78.50) with Amanda Shaw and Ethan Tucker opening. I’ve been a Franti fan since he fronted Disposable Heroes of Hiphoprisy and their 1992 album Hypocrisy is the Greatest Luxury. Politically progressive and musically creative, Franti has made forays in genres from hip-hop ro reggae to rock, jazz, folk, and funk.

All the shows are all ages, and tickets can be purchase online at vinaroblesamphitheatre.com.

Adam Ant hasn’t sold out yet? What the hey, SLO Town!?! 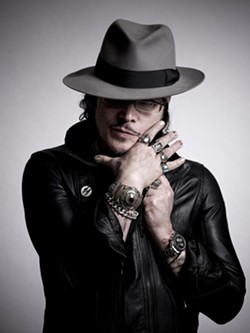 He gained his reputation during the new romantic, post-punk, new wave era with the group Adam and the Ants and later as a solo artist. Don’t tell me you don’t remember tracks like “Stand and Deliver,” “Prince Charming,” and “Goody Two-Shoes.”

Known for his outlandish attire and make-up, he was once voted sexiest man alive. He’s 58 now, and he did go sort of insane for a while, like the time he threw a car alternator through a pub window (he had his reasons!), but in 2010, he re-launched his career in earnest in the U.K. and later had tours through Europe, Australia, and the U.S.

In January, he released his first new album in years, Adam Ant is the Blueblack Hussar in Marrying the Gunner’s Daughter, which was independently released but still managed to climb to 25 on the U.K. album charts. It also garnered plenty of critical acclaim. I don’t know what you’re waiting for. Go buy tickets! Adam Ant! At the Fremont! Get them at Boo Boo Records or any Vallitix outlets or online at vallitix.com.

And speaking of awesome ’80s new wave acts, get your Wang Chung on this Friday, Aug. 9 (7:30 p.m.; 21-and-older; $14 presale or $16 at the door) at SLO Brew. Remember “Dance Hall Days” or “Everybody Have Fun Tonight?” Yeah, everybody Wang Chung tonight! Just so you know, Wang Chung means yellow bell in Mandarin and is also the first note in the Chinese classical music scale. You’re welcome.

Also this week at SLO Brew, check out Chris Shiflett & The Dead Peasants on Saturday, Aug. 10 (7 p.m.; 21-and-older; $10) with Rod Melancon opening. If the name Chris Shiflett sounds familiar, you must be a Foo Fighters fan (How’s that for alliteration?) because he’s their guitarist, but in this incarnation, Shiflett writes and performs Americana-laced rock songs on an acoustic Martin and sometimes a twangy electric.

Goddamn Gallows returns on Sunday, Aug. 11 (7:30 p.m.; 21-and-older; $10) with The Calamity Cubes opening. If you’re in the mood for twanged-out punk rock hobo-core gutterbilly, be there! 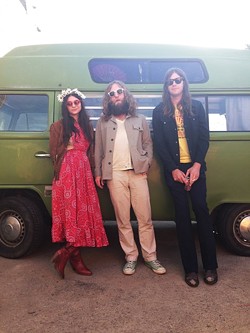 On Tuesday, Aug. 13, The Blank Tapes return to SLO Town on their “California Bay to Baja Tour” with fellow Southern California surf garage pop bands Mystic Braves (formerly Blackfeet Braves) and Hindu Pirates (both Hindu Pirates and The Blank Tapes last toured with Matt Costa). The Blank Tapes have an awesome new album, Vacation, and my favorite magazine, The New Yorker, has perfectly described the trio’s sound as “the Archies if Lou Reed had written their songs.” Get thee to YouTube and check out their tune “Coast to Coast,” then buy tickets and hit this show!

And just a quick reminder that Cherie Currie of The Runaways hits SLO Brew on Sunday, Aug. 18 (8 p.m.; all ages; $15 presale or $17 at the door). Did you see the 2010 film The Runaways with Kristen Stewart as Joan Jett, Dakota Fanning as Currie, and Michael Shannon as punk impresario Kim Fowley? Because it’s a pretty killer flick and was based on Currie’s book chronicling her time fronting the all-girl punk act at the tender age of 15. Known for her jailbait onstage persona and lingerie, Currie went on to become an actor (her first role was in the 1980 film Foxes with Jodie Foster), and eventually—get this!— Currie became a noted chainsaw sculpture artist. You can’t make this stuff up!

Soul and gospel singer Gerald Purify will perform at the SLO Farmers Market this Thursday, Aug. 8 at 6 p.m. on Higuera Street. Both his parents had powerhouse gospel voices, and it sure didn’t skip a generation with Gerald, whose soulful voice has captivated audiences all over the country, though he’s a SLO Town native. Check him and have your soul lifted! 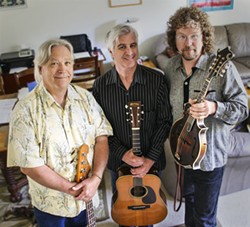 The Hay Dudes return to Shine Café for their monthly appearance of the “MoonSHINE Bluegrass Sessions” on Thursday, Aug. 8 from 7 to 9 p.m. Call 771-8344 to make reservations as seating is very limited.

Erik La Chapelle plays Frog and Peach this Thursday, Aug. 8 at 7:30 p.m. The guitar player also steps on a bass drum while playing, giving this solo artist a fuller sound.

Get your dose of reggae when Resination plays the next Concerts in the Plaza this Friday, Aug. 9 from 5:30 to 7:30 p.m. in front of the SLO Mission.

Back Bay Betty has a question for you: “Are you ready for some funky blues for your dancin’ shoes?” Because they’re ready to throw down some great dancing music at two shows this week on Friday, Aug. 9 at Paso’s Rio Seco Winery from 6 to 9 p.m. Saturday, Aug.10 at Mr. Rick’s from 8:30 p.m. to 12:30 a.m.

Head to the Red Barn in Los Osos this Saturday, Aug. 10 (5 p.m. potluck; show at 6; $10 at the door; BYOB) and check out The Celtic Collective, which plays traditional and contemporary Irish music and features Christa Burch (vocals/bodhran), Samantha Harvey (accordion), Ashley Broder (mandolin), John Weed (fiddle), and Stuart Mason (guitar/mandola). This is basically a folk super group, and its members hail from other great music acts such as Molly’s Revenge, The Syncopaths, Little Black Train, and Alasdair Fraser’s Scottish Fiddlers. 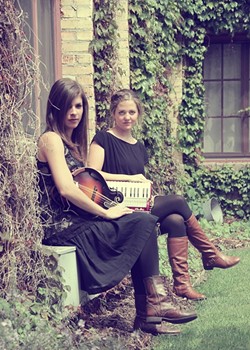 Kurt Vile and The Violators play The Ranch in San Miguel this Saturday, Aug. 10 (6 p.m.; 18-and-older; $18). The Philly rock band has appeared on the cover of SPIN magazine and their fifth album Wakin On A Pretty Daze has become a career breakthrough and critical success. Gauzy and psychedelic, Vile’s sound features ’60s sensibilities and offers up gorgeous rock reveries.

There’s a hip party happening this Sunday, Aug. 11 at the SLO Grange Hall from noon to 5 p.m. No, seriously, it’s literally a hip party because it’s a fundraiser for Tim Jouet, who broke his hip while bike riding and didn’t have insurance (Obamacare, kick in already!). It should be a ton of fun and features an awesome lineup of local acts like the rock stylings of The Wedding Industrial Complex, blues and alt-country by John Sandoval, western swing by Ynana Rose (of the Swingin’ Doors), the sweet folk sounds of Amber Cross, bluegrass by Mason Weed (with John Weed and Stuart Mason of Little Black Train and Molly’s Revenge), Gilles Apap and Estelle Hiron (a classical violinist getting down and dirty with Irish fiddle duets), Old Time Fiddle and Banjo Show (featuring Gary Arcemont, Stuart Mason, Amber Cross, and New Times cartoonist Jerry James), and Booker T. tribute act The Booker Tease. Chip in $20 at the door, have some fun, and enjoy a potluck of snack foods and beer. A portion of the proceeds will also go to the SLO Bike Coalition. Kids 12 and under are free! Ride your bike for a discount at the door!

This Sunday, Aug. 11, guitarist Howard Alden, who did the guitar work for Woody Allen’s hit comedy film Sweet and Lowdown, is the next attraction at the Famous Jazz Artist Series at D’Anbinos in Paso Robles. Alden is well known as one of the world’s top jazz guitarists. Bassist Luther Hughes as well as series co-producers Charlie and Sandi Shoemake (vibraphone and vocals) will join in. There are 4 p.m. and 7:15 p.m. shows for $15 each, or see both for $20. Call 927-0567 for reservations.

On Wednesday, Aug 14 at 5 p.m., Barrelhouse Brewery hosts Sara Petite, who’s touring in support of her new album The Circus Comes To Town. “This album came on the heels of my best friend and partner Johnny Kuhlken suddenly passing away in 2011,” said Petite. “Some material was already written for the album, and some of it was written after he passed away. Making this album was a way to keep me going, trying to find light in a dark world, as I cursed the sun every morning it was shining in my window.” On a lighter note, according to Mojo Nixon, Petite “could sing a buzzard off a Slop Wagon.” The show is free.