Dude, you guys. Comedy Festivals. I’m telling you. They’re freakin’ so sweet. Imagine all the drunken hijinks of a pub crawl, then subtract the clumsy dancing and replace it with hilarious people, just everywhere. You get a drink, and there’s a professional joke teller at the bar. You sit down, and you laugh your ass off as one comic after another takes the stage. 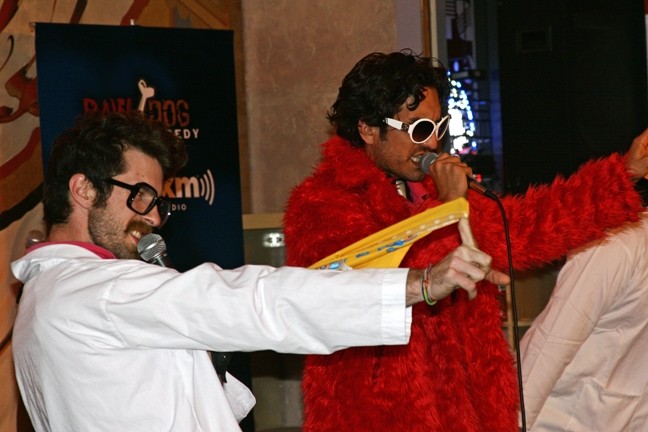 When your drink’s been drunk and your face muscles are literally hurting from the effort, you take a smoke break outside, but the comics are there, too, telling stories of mushroom adventures with the Mrs. There are more comics back at the bar and more taking the stage every few minutes. Then, when the show’s over, you march a few blocks down the road and do it all again, only slightly drunker and prone to louder fits of laughter.

Basically, comedy festivals are magical. They’re where sadness goes to die, where almost every person you meet lives for chuckles, feeding off them like some kind of clown/vampire highlanders from Hollywood.

Each venue in the second annual SLO Comedy Festival had a different theme, and the first one I was able to attend was the Bro Show. I brought my wife, which may have been a mistake. All the sexist jokes were awful—awful hilarious!* But that’s the cool thing about comedy. It takes horrible things like sexism and racism and suffering, and it turns them into joke fodder, something positive that takes their power away for a little while.

The next night, Kellen Kenny, my hometown best buddy from way back, tagged along, so I was able to drink more and laugh freely. I probably took both a bit too far. Kellen has been doing a bit of stand-up himself, making this a good opportunity for both of us to abuse my press pass.

First, we hit the Comedy Lounge in the VIP area of MoTav. The comics were great, especially the dead-pan delivery of Curt Sudden, but we could hear the distracting crowd murmur from the people eating downstairs. Also, I ran into the one comic I had mentioned not liking in my previous week’s column. So that was awkward.

He was pretty pissed at the incredibly harsh, one-sentence slam, in which I said that I didn’t personally care for his style but there’d be something for everyone at the festival. Maybe it was unfair to single him out, but I figured a 20-year veteran would have thicker skin.

I ran into him again at the Hot Dames Show at Marston’s (a way better venue, and probably the best show I saw all weekend).

“That was a real cocksucker move,” he said.

Ouch! It was then that I realized Suli McCullough is actually super duper funny, and that his jokes tickle me in ways I never thought possible. Sorry for the mistake.

The ladies knocked it out of the park with a surprisingly vulgar series of sets, and I learned a lot of things about life as a woman. For instance, lesbians can’t use roofies (what would two girls do if one were asleep?), and avoiding pregnancy is harder than it sounds.

“Every month my body tries to make a baby,” said Jen Murphy, “and I gotta say, ‘No, just bleed!’ I’m walking around with an empty baby hole filled with Jack Daniels and regret.”

Afterward, we stumbled over to the “Poisoned” show at Spike’s Pub, where the comedians were too drunk to remember their full sets (they still killed), and I was too drunk to function at all. Good times.

* They were also miles better than that turd of a joke.