Too much good stuff: Music bombards the Central Coast this next week

I  don’t know the best way to say this, but a 29-year-old on his way to becoming a country pop legend is headlining the second annual Backwoods Beach Party in Avila Beach. 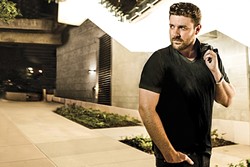 On Saturday, Sept. 17, Chris Young will take the outdoor stage before the sun sets over the Avila Beach Golf Course. This baritone crooner from Tennessee has climbed his way up to No. 1 on Billboard’s Hot Country Songs chart eight times since 2009. And it all started when he won the Nashville Star TV show—yup, that’s pretty much the country equivalent of everyone’s favorite: American Idol—in 2006.

I’m Comin’ Over, his fifth (and most recent) album, hit No. 1 on Billboard’s Top Country Albums chart in December 2015. Chart-toppers off that latest album include “Think Of You,” a duet with Cassaddee Pope, and “I’m Comin’ Over.” And if you’ve ever inadvertently landed on a Central Coast country station while trying to find a radio station that’s not playing commercials, then you’ve probably heard his deep voice serenade you as you passed it by.

His first No. 1 hit was “Gettin’ You Home (The Black Dress Song)” in 2009 off The Man I Want to Be, which also included the hit “Tomorrow.” He’s pretty famous for singing his heart out to all his big hits at his concerts, so it should be a boot-smashing good time.

The event, also known as the Avila Beach Country Music Festival, is presented by Otter Productions Inc. and also includes Texas-country act The Josh Abott Band, whose latest album, Front Row Seat, is a raw tribute to love and divorce; and Texas singer-songwriter Jack Ingram, who released the latest album of his 20-year career, Midnight Motel, in August.

Don’t bring your own shots of Patron to this outdoor country music celebration, or your own food for that matter, as those are definitely not allowed. And neither are pets nor umbrellas. But you can tow in a low-backed lawn chair and blanket if you’ve got a lawn seat. You can find tickets via valltix.com, at Boo Boo Records, by phone at (800) 825-5484, or at the Cal Poly PAC box office polytix.calpoly.edu (2 p.m.; all ages; $50 to $110).

Castoro Cellars is putting on Beaverstock once again this year over the weekend of Sept. 17 and 18. You can get two days of wine, yoga, games, arts, crafts, and music in the Templeton vineyard for $80 or a one-day pass for $55 (castorocellars.com/beaverstock), and proceeds benefit Templeton Music Education. 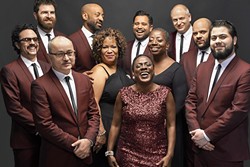 The funky, soul-soaked bluesy tones of Sharon Jones & the Dap-Kings close out the main stage on Saturday, Sept. 17, at 8 p.m. The band has traveled the world for almost two decades, and Sharon Jones bounced back from a 2013 cancer diagnosis with one of the biggest years of her career in 2014, which was capped off by Grammy nomination for her album Give the People What They Want.

Her music may not be mainstream, but her voice resonates powerfully with her audience, so much so that filmmaker Barbara Kopple followed the singer’s battle with pancreatic cancer as the band was trying to release a new album in the documentary Miss Sharon Jones!, which was released in 2015.

That September Saturday in Templeton kicks off with the multi-genre band One Time Spaceman, whose tunes will get you hooting and hollering for the day to come, starting on the main stage at 1 p.m.

The Tumbleweed Wanderers bring their Americana-inspired mix of soul and rock to the main stage starting at 2:30 p.m.; Idaho-bred, Portland-based indie folk-pop band the Shook Twins takes the stage at 4:15 p.m.; and the funky rock ’n’ roll beats of Chicago-based The Main Squeeze will get you moving at 6 p.m.

Jackie Greene will set the main stage at ease with his soulful brand of Americana closing out Beaverstock at
8 p.m. on Sunday, Sept. 18. He released his first album at the ripe old age of 22, and it led to a series of tours opening for the likes of B.B. King, Buddy Guy, Tedeschi Trucks Band, Huey Lewis, and Taj Mahal. In 2013, Greene joined the Black Crowes as a lead guitarist. In 2014, he contributed to the self-titled debut album of Trigger Happy, where he joined group members Joan Osborne and Crowes drummer Steve Gorman. He also makes frequent appearances with Phil Lesh & Friends (Lesh was the Grateful Dead’s bassist).

He’s approaching the end of his second year on tour for his 2015 release Back to Birth, his seventh album. It was produced in collaboration with Los Lobos member Steve Berlin and a crew of jazzy players with Greene on several instruments.

“Musically, this album is kind of a return to the simplicity of the records that I started with,” Greene said on his website. “A lot of these songs explore the notion of a cyclical existence, and the sense that life goes in a circle. I want the songs to come from a place that’s meaningful to me, but I also want to keep them as simple and direct as I can.”

You can sing those songs directly to me, Mr. Greene. And I’ll love every minute of it.

And there’s so much music that comes before him on the main stage. Moonshiner Collective brings its blend of folk rock and vocal harmonies to the Beaverstock audience at 1 p.m. The unbound trio Baskery, which could be compared to country or bluegrass but really shouldn’t, shares their inexhaustible energy starting at 2:30 p.m. The New Orleans bluegrass-swinging soul of funky blues The Dustbowl Revival steps things up a notch at 4:15 p.m.

G. Love & Special Sauce is planning to change your world in one show at the Fremont on Thursday, Sept. 15, and hopefully it’s not too late to get your ticket (7 p.m.; all ages; $35 at the door).

At least that’s the thought behind “Superhero Brother,” the title track on the Philly group’s latest album:

We can change the world/In a week or a day/And if you’ve got a problem/Man, I’ll sweep them away/If you find yourself in a world full of trouble/Just call on G. Love/The superhero brother/And I’ll be there.

And with those lyrics you’ll be swept up into the G. Love world of dance-ready rhythmic funk stylings akin to, well, something only G. Love can produce—Delta stomp, rappin’ blues, Beatles and Stones-influenced rock, island rhythms, etc. You know, they’re pretty unique and oh, so much fun live!

“We’re a hard-working band,” G. Love said in press materials. “Every time we hit the stage or the studio, we make sure we give 150 percent. Playing in front of people is just such an integral part of the experience for us. We love to ride that energy and get that instant reaction.”

If you’re looking for something a little more intimate and lonely with some bright spots here and there and a happy back beat, Brett Dennen is your man. He plays the Fremont on Saturday, Sept. 17, on his way ’round for recent album Por Favor (7 p.m.; all ages; $25 to $33 at ticketfly.com).

“When you say please, you’re asking something to come into your life,” Dennen said about his album title in press materials. “It might mean that you’re weak and need something to make you strong. But you’re admitting some sort of weakness or some form of humility.”

And that’s exactly what he was going for with Por Favor, which is chock full of songwriting that has nothing to hide. Sadness, loss, love, and all the side effects that go with them, including the insecurities.

Sister act and folk duo Lily & Madeline will open the show with stripped-down versions of the latest tracks from their third full-length release, Keep It Together.

Also hitting the Fremont before next Thursday are The Mavericks, an American band combining neo-traditional country, Latin, and rockabilly, on Tuesday, Sept. 20 (7 p.m.; $40 to $50 at Boo Boo Records or online at vallitix.com).

Well, I seem to be quickly running out of room to get the full breadth of this week’s music happenings into the column, but I’m going to try to stuff as much as I can in here, so bear with me, please!

Scratchdog Stringband out of Portland will fill Linnaea’s Café with Americana/rockgrass on Thursday, Sept. 15, at 8 p.m. (no cover).

The Mexican singer-songwriter was awarded the President’s Award at the 23rd annual BMI Latin Awards in 2015 for her excellence in Latin music. 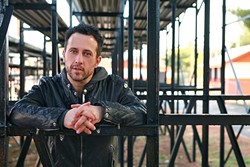 Singer-songwriter Will Hoge will blend rock, country, soul, blues, and folk into a performance at the Guild Hall (formerly the SLO Grange Hall) with opener and local legend Joe Koenig on Tuesday, Sept. 20 (7 p.m.; $16 presale at ticketfly.com; $20 at the door).

Camillia Lanham knows she missed something, but don’t hold it against her at clanham@newtimesslo.com.