SLO: I miss you already 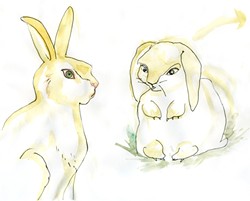 It’s been more than four and a half years since I arrived at my first house on Lawton Street, where I lived among Cal Poly’s finest, who were, more often than not, immersed in online video games, in which it’s OK to shoot people in the face with fictional assault riffles, and drinking Captain Morgan’s spiced rum. The only thing that got me through those bleak days was Utopia Bakery, particularly the coconut chocolate Danishes.
God bless.

Three and a half of those years (that were supposed to be the best years of my life) were spent at New Times. And now that I have been sucked dry, it’s time to take my withered husk of a self elsewhere, lest I suffer the same fate as Big Fish’s Norther Winslow, sitting around barefoot, eating pie and trying to find words that rhyme with Obispo. Instead, I’ve come up with a task that is similarly pointless, but will push me out the door and probably provoke so much resentment I won’t be welcomed back into this dear, sweet Spectre of a town. So, without further ado, here are the top 10 things I’m going to miss about San Luis Obispo.

10. The white rabbit. This is not a metaphor for some drug haze or spectacular bender. No, really it’s not. There actually is a wild house bunny that roams the streets of my neighborhood. It has the look of a lost pet. It’s reasonably groomed, well fed on crabgrass and clover, and completely vulnerable. The little beast has survived for two years on the streets, since I first saw it and tried to lure it to my house with a piece of sandwich. The bunny is elusive, vanishing for weeks or months at a time, only to reappear a block from the previous site of sighting. Each time I see it feels like a triumph, and I can’t help thinking about Watership Down and what it means to be a rabbit, which is to be hunted by everything. Don’t judge me.

9. I’m really going to miss the weather in SLO. It’s always so nice, not quite perfect, never very dramatic, but really nice, like people in Minnesota. Yeah, it’s nice in SLO.

8. The biking community. I have always ridden a bike for transportation; I’ve never liked driving. I was even in love with several bikes, but I didn’t really become a bicyclist until I moved to SLO. That is, I didn’t identify with the culture of biking and the lifestyle (plus thighs) that go with it until I came to SLO. The bike community here is special: instead of the politically charged Critical Mass rides present in other cities, SLO has Bike Happening. It’s quaint, often original, and generally inoffensive, like SLO. With a dozen little bike sub-cultures, from bike activists to fixie kids, I can’t imagine any similarly sized area with more energy behind biking.

6.  I’m going to miss the cops. Cops in this town have a pretty sweet deal, making $85,000 a year to start, plus bennies. I don’t need to imagine for what service they are paid, since I went on a ride–along once, (they wouldn’t let me go on a second) and have been pulled over on my bike a half dozen times, and paid thousands into the system for having too good a time at my own house. Actually, when I handed in my resignation at New Times, I figured I could just put on the navy blue uniform and ditch my bike for a super-aggressive- looking Dodge. I thought it would be perfect for the job. I mean, I love crashing parties, I don’t have much in the way of a formal education, and why not triple my salary? But Deb Linden wouldn’t even return my phone call, and I’m soon to be homeless, which I understand is illegal here.

5. Speaking of homeless, I already miss the homeless woman who used to live in Mitchell Park. We never talked much. Most of our conversations were about like this:

4. If everything in my life goes wrong and I wind up with progeny to pass my wisdom to, I would tell them this: Don’t care about anything, because it will only lead to disappointment. Unless you are a developer, then you can have whatever you want at a good price. I learned this from the City Council. I’m going to miss these life lessons.

2. It’s true, I’m leaving SLO, but I’m leaving more than a city. I’m leaving my boyfriend to get educated. But ladies, gentlemen: hands off. I’m not the jealous type, but I am bat-shit crazy like a fox. And drunk.

Kylie Mendonca can’t be reached for comment at Kmendonca@newtimesslo.com.