After canceling their show at Denver’s Paramount Theatre on Sunday, Sept. 4, because singer Joseph Williams was hospitalized, Toto was back at it again for their Salt Lake City tour date.

As far as I know, the altitude sickness that put Williams out is not going to be a thing in Paso Robles, which is a little more than 700 feet above sea level—a few thousand feet shy of the mile-high city. Lucky for prog rock fans on the Central Coast, the Grammy Award winning band is still on for their Evening with Toto at Vina Robles on Sunday, Sept. 11 (7:30 p.m.; doors open at 6 p.m.; $45 to $65).

Thank goodness, Toto will be able to bless the stars in Paso with their 1982 hit “Africa” along with many of the other hundreds of songs the band has penned over the years, including “Hold the Line” and “Rosanna” as well as songs off the Toto XIV album, released in 2015, nearly 40 years after the band’s beginnings.

The release debuted in the top 10 in nine countries around the world and was Toto’s most successful album since 1988 in the U.S. and U.K.

The core Toto members, Steve Lukather, David Paich, Steve Porcaro, and Williams—which every media outlet feels the need to point out is the son of Star Wars composer John Williams, so I thought I’d better get on that band wagon—will be joined by Lenny Castro (percussion), Shannon Forest (drums), Leland Klar (bass), and back-up vocalists Mabvuto and Jenny Douglas.

“We look forward to bringing a longer show to our fans across the U.S. It has been an interest for David, Steve, Joseph, and I over the past couple of years, and we can’t wait to get out there this summer,” guitarist Lukather said in press materials.

Chris Isaak is once again showing off his swoon-inducing dulcet tones and sparkling fashion sense at Vina Robles on Wednesday, Sept. 14 (7:30 p.m.; doors open at 6 p.m.; $45 to $70), and I intend to enjoy every minute of it.

Of course, an Isaak show wouldn’t be complete without his iconic hits “Wicked Game,” “Baby did a Bad Bad Thing,” and “Somebody’s Crying.” If nothing else, as long as I get to hear that deep baritone whip out “Wicked Game,” I’ll be one happy little lady.

For all you Christian rock fans out there, NEEDTOBREATHE out of South Carolina will be headlining at Vina Robles on Friday, Sept. 9 (7 p.m.; doors open at 5:30 p.m.; $36 to $46). The band’s new album, Hard Love came out this summer, featuring singles such as “Happiness” and “Money & Fame.”

“Up until now, I think we made people climb in through the window to really get into our band, but this record is about leaving the front door wide open. It’s very different and adventurous for us, but I can’t wait for the fans to hear it,” Bear said in press materials.

The album follows the 2014 release of Rivers in the Wasteland, which topped Billboard’s Top Rock Albums and Top Alternative Albums charts while also entering the overall SoundScan/Billboard 200 at No. 3. “Multiplied” off that album garnered the NEEDTOBREATHE’s first ever Grammy Award nomination. “Brother” featuring Gavin DeGraw became the band’s first-ever entry on Billboard’s Hot 100.

Be a love song

“Easton Corbin has one of those rare, glorious voices that was made—just made—for singing country music,” according to American Songwriter. He hit the scene in 2009 with two No. 1 singles, “A Little More Country Than That,” and “Roll with You.” He won three American Country Awards in 2010 and went on tour with Rascal Flatts, Brad Paisley, and Blake Shelton.

Billboard named him as the Top New Country Artist of 2010. He released his sophomore album, All over the Road, in 2012 and his third album, About to Get Real, in 2015.

If you’re just clicking into the country music scene, you should recognize “Baby be my Love Song” from his latest album. I guess you could technically be his “all night long,” too, if you head to Pozo for the concert.

Opening for Corbin is the Oklahoma duo known as the Swon Brothers, Zach and Colton—made famous in 2013 when they finished third place on the fourth season of NBC’s The Voice. They released a self-titled album the following year featuring “Later On” and “Pray for You.”

You can get your outdoor bootstomping on with a low-back chair or blanket for lawn seating. No outside food or beverages allowed, and please get a designated driver if you plan on drinking. It’s a long, windy, dangerous ride home after a day of fun in the sun.

It wouldn’t be a musical week in SLO County without some concerts from Good Medicine Presents. Here’s a lineup for you. The Inciters are bringing that sweet ’60s flavor to Tooth & Nail Winery on Friday, Sept. 9 (5:30 p.m.; free). It tastes good with everything.

Chuck Ragan & The Camaraderie plays Tuesday, Sept. 13, at Sweet Springs Saloon (8 p.m.; 21 and older; $16 at ticketfly.com). Ragan’s bracing new release Till Midnight shows off the singer-songwriter’s skills as a compelling songwriter and charismatic performer. The album’s blend of head and heart is reflected in the eloquently lyrical “Vagabond,” “Something may Catch Fire,” and “Wake with You.” 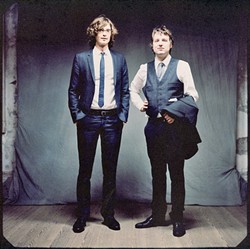 “There’s a lot of love songs on this one,” Ragan said in press materials. “I love to write love songs because it’s the most powerful emotion. It’s what grounds us to this earth and makes us want to fight to make the world a better place. I always just try to write from the heart and make the music as genuine as possible.”

The twice Grammy-nominated duo released their third album, Monterey, in May 2015 to rave reviews and their second Grammy nomination, this time for Best American Roots Performance for their song, “The City of Our Lady.” It followed their 2014 Grammy nomination for Best Folk Album for The Ash & Clay. The Milk Carton Kids won Duo/Group of the Year at the Americana Music Awards in 2014.

Cultural icons from Garrison Keillor to Billy Bragg have hailed the duo’s importance among a group of new folk bands, but while some of the band’s accolades reference that specific genre, Joey Ryan and Kenneth Pattengale also transcend that tag with inflections of jazz, classical, and even alternative.

G Love & Special Sauce brings beats and funk to the Fremont on Thursday, Sept. 15 (7 p.m.; all ages; $30 presale on ticktfly.com or $35 at the door). Superhero Brother Garrett “G. Love” Dutton (vocals, guitar, harp), Jim “Jazz” Prescott (bass), Jeff “Houseman” Clemens (drums), and Mark Boyce (keyboards) will get you groovin’ the night away with their self-described brand of “hip-hop blues.”

“I think of us as a rock and roll group,” G. Love said in press materials about the group’s latest album Superhero Brother. “We definitely incorporate a lot of different flavors, which is why we tried to focus on what we’re known for this time. … Making sure the backbeats are funky. Each song tells a unique story, both in subject and musical style.”

There’s so much more to say, but that can wait until next week. This was just a sneak peak, so ya’ll could run out and get your tickets, quick.

This year’s Avocado & Margarita Festival won’t let you down—yes, guacamole and tangy margs are a sure thing, but it’s so much more than that.

The street festival will be held on Saturday, Sept. 10, from 10 a.m. to 7 p.m. on the Embarcadero in Morro Bay. Culinary delights and tunes await. Live performers will include Bear Market Riot, Black Market Trio, Proxima Parada, The JD Project, Zongo All Stars, Samba Loca, and more. The $5 tickets are on sale at Eventbrite, on avomargfest.com, or by calling 772-4467.

This year’s event is bigger than last year’s and will include a Taste of the Grove event on Friday, Sept. 9, from 6 to 9 p.m. The cocktail evening with farm-to-table pairings by local chefs and farmers (with avocados, of course) will take place at the Packing Shed, an avocado farm minutes from town. This part of the shindig is limited to 200 guests and is expected to sell out fast. Tickets are $60.

Hey, hey, SLO Brew’s back again. It’s the same but different. The food’s better—at least that’s what people tell me—and I’m itching to see if the sound’s better, too.

If you’re having similar thoughts, you can find out for yourself by checking out reggae-rock vibes of The Movement, who plays the new music venue on Friday, Sept. 9 (9 p.m.; 18 and older; $12 general admission or $30 VIP balcony at ticketweb.com), with opening act Brewfish.

The chill reggae beats continue on Saturday, Sept. 11, with Josh Heinrichs and Skillinjah, who are on their Best Buds Tour (9 p.m.; 18 and older; $12 general admission; $20 VIP). Cityside opens.

On Wednesday, Sept. 14, you can catch Davina & The Vagabonds (9 p.m.; 18 and older; $10 general admission; $25 VIP). The jazz crew is stopping by SLO Brew on their way to the Monterey Jazz Festival, which I hear is a grand time. Davina Sowers has a commanding stage presence with influences ranging from Fats Domino and the Preservation Hall Jazz Band to Aretha Franklin and Tom Waits.

They released her first full length album in 2011, Black Cloud. It was named one of the 10 best releases of the year by the Minneapolis Star Tribune. Their next album, Sunshine, hit No. 13 on the Billboard Blues Chart in 2014.

Four Day Beard is playing SLODoCo on Friday, Sept. 9 at 7 p.m. The local indie alt rock band will be playing a handful of new original songs from an upcoming EP, including a new song about and named for that delicious effervescent local donut shop they will be playing in. 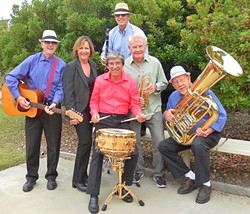 Mardi Gras meets Octoberfest as the free AG Village Summer Concert Series closes out on Sunday, Sept. 11, with Judith and the Jazz Krewe starting at 1 p.m. at the Rotary Bandstand in the Village of Arroyo Grande.

Award-winning singer-songwriter Jody Mulgrew headlines the final concert of Sculpterra Winery’s summer series Wine Down Wednesdays on Sept. 14 (6 p.m.; $15 for the general public; $10 for wine club members). Mulgrew began his musical career at Morro Bay High School, moved onto the Cuesta College vocal jazz ensemble Voce, has lived and performed in LA, on the Central Coast, and in Nashville. He’ll perform songs from his most recent album As the Sun reclaims the Sky. Special guest Elizabeth Etta will open the show with a collection of songs from her new release And So She Sang.

The Ventura County-based singer-songwriter and multi-instrumentalist Gracie Gray will serenade Linnaea’s Café on Tuesday, Sept. 13 (7 p.m.), with her soaring falsetto and haunting melodies.

I know, I know, there’s still more music that I haven’t told you about. Look for it in our Clubs section or this week’s calendar.