Some merchants are calling the big bike race a big bust for local business.

Call it sour grapes, but not everybody was thrilled to see the Amgen Tour of California take over the streets of Downtown SLO last month. In fact, while the Chamber of Commerce crosses its fingers in hopes of a repeat visit by the Tour next year, some local businesses say theyâ€™d be fine if race organizers changed route and skipped SLO altogether. Why? In spite of all the talk of the financial boon the race created for the city, it turns out not everybody cashed in on the event. On the contrary, lots of folks say they lost precious business, even as the streets were overflowing with potential customers. 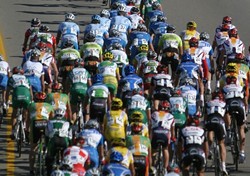 # â€œYes, people were everywhere,â€? says Michael Helper, owner of Photo 101 on Monterey Street. â€œBut they were watching the blaring big screen TV, set up just outside of my store. They were watching commercials and my store was totally empty.â€?
Â
Â â€œIt killed business for me,â€? he says, running down a litany of complaints he has about the event. For starters, he says the city misled downtown merchants about the duration of the event, noting that Monterey Street was supposed to be closed only for four hours. It turned out to be more like 14. â€œBasically, the streets were closed down all day, for an event that lasted all of five minutes, which made it difficult for anybody who wanted to come downtown for anything but the race to park or even walk around.â€?
Â
Helper also objects to the out-of-town merchants who set up booths throughout Mission Plazaâ€”businesses he says distracted visitors from checking out the local stores. â€œMy problem is that a company from LA put on this entire event for their own profit. Unfortunately, they [the city] didnâ€™t lose a thing. They got taxes from the hotels that were full, all those out-of-town vendors had to buy business licenses, and they got sponsors to cover their parking losses. It was a big day for a lot of people, but this wasnâ€™t for the citizens of SLO.â€?
Â
City officials admit that some businesses may have fared better than others during the dayâ€™s festivitiesâ€”most notably, hotels and restaurantsâ€”but they say that the bulk of responses from downtown merchants have been positive. â€œI would say 99.9 percent of them would like to see it come back,â€? says Linda Fitzgerald, the cityâ€™s Parks and Recreation manager. She adds that, in spite of sponsorship and tax revenue from outside vendors, the city actually sacrificed about $6,000 in parking in order to host the event. It will be months before the city has a clear idea of exactly how well it fared as a result of the event.

Dean Moore, owner of Fordenâ€™s (a household goods store, also on Monterey Street), says that heâ€™s glad that some businesses thrived off the event, although he wasnâ€™t one of them. â€œWe support whatâ€™s good for the community,â€? he says, â€œbut this thing was of no value to me. They really hyped it up as a big thing, and basically there was a lot of confusion outside. I certainly didnâ€™t see the point of closing things down for so long.â€?

Businesses on Higuera Street suffered, too. â€œI wish I could say it benefited me,â€? says Mike Foree, co-owner of Audio Ecstasy, â€œbut it didnâ€™t.â€? He says he never does well when the city shuts down the streets, especially during the week. Still, he says, it was interesting to be part of the experience, and if they do it again next year heâ€™ll just remember to write that day off in advance.

If not outright upset, storeowners certainly werenâ€™t thrilled by the added chaos of the day. â€œI think people came for the race and then left to avoid the crowds,â€? says Kannyn January, owner of Ambiance. â€œI definitely thought it was going to bring in business. Iâ€™m not going to complain, but it was actually much slower that day.â€?

Not all downtown merchants were put off by the race, however, even if it did cause some inconveniences. Lorily Grefalda, a stylist at Thomas Everett salon on Chorro Street, says her clients were late all day because of parking restrictions, but she still thinks the race was, overall, a positive event. â€œIt was really exciting,â€? she says. â€œSome people just have to complain, I guess.â€?

Helper insists his beef isnâ€™t with the cyclists or the fans, but with Amgen, the tourâ€™s sponsor, and the city, both of which gave little thought to the inconveniences the tour posed to small business owners. â€œWhen they filmed that Sandra Bullock film here a couple of years ago, it affected business all over.â€? He says. â€œBut they wrote a check to offset the interruption. Unfortunately, these guys didnâ€™t think to do anything. How does that help me?â€?

Laura Spence, Communications Director for the Chamber of Commerce, says that if the city gets to host the tour again next year, theyâ€™ll have a lot more time to plan an event that pleases even more people. â€œI donâ€™t think people realize that two people pulled this off in three months. Usually you would need three times as many people and a whole year to plan something like this,â€? she explains. Ultimately, though, she believes the entire city benefited from this yearâ€™s tour. â€œPeople all over the world saw SLO on ESPN, and that will have a huge impact on future tourism,â€? she says, something every merchant needs to consider.

Still, she knows they wonâ€™t be able to please everybody. â€œWe will definitely take peopleâ€™s complaints into consideration,â€? she says. â€œBut ultimately, they have to remember that this is just one day out of the whole year.â€? âˆ†