by Sarah Thien and Ryan Miller

Last year, they came, and the city especially the cycling fans rejoiced.

This year, they're coming back again. On Feb. 22, the eight-day, 700-mile Amgen Tour of California will send 18 professional teams from Seaside to San Luis Obispo, where they'll mark the end of the fourth stage of the competition. 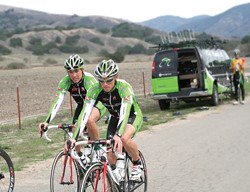 # Professional cycling is steadily gaining popular ground in the United States. Dave Towle a longtime cycling supporter and the announcer for the Amgen Tour of California, every Tour de Georgia, and the USPRO Championships said that there are now more cyclists registered with USA Cycling, the competitive organization that governs U.S. cycling, than ever before.

The Amgen Tour of California has, in one year, arguably become the largest and most important race in the American season. The teams are evenly split into competitors on the Union Cycliste International (UCI) Pro Tour and those who race predominantly in the United States.

Last year's overall team winner, CSC, is back again this year, along with top European teams, the best cyclists in the United States, and even Italy's Paolo Bettini a world champion, no less in his first U.S. race.

For some American teams, this race is one of their only shots at competing against UCI teams, making it one of the biggest if not the biggest race of the year.

Once they enter San Luis Obispo County, this year's competing cyclists will follow a route south on Highway 1 through Cambria, Cayucos, and Morro Bay. After Cuesta College, they'll whiz along O'Connor Way and Foothill Boulevard to the finish line in San Luis Obispo.

About a week before the tour was to arrive, the California Highway Patrol announced a list of long-term road closures and possible alternate routes. The patrol will use signs and changeable message boards to let motorists know about possible delays.

If you need to get around on four wheels instead of two on Feb. 22, keep the following in mind:

Highway 1 northbound will close at Cayucos Drive from 1 to 2:30 p.m.

There will be other closures as well, and for much of the above, the actual closure time depends on race progress, and could be delayed by an hour.

Rich Ogden with the San Luis Obispo Parks and Recreation Department is still looking for volunteers to help at the event, mostly as course marshals to ensure that the course is safe at all times. He's looking for people to help between 1 and 4 p.m. on Feb. 22. Volunteers will receive a free Tour of California T-shirt. Contact Ogden at 781-7305.

In honor of the tour, visitors can attend a health and lifestyle festival in Mission Plaza on Feb. 22 from noon to 5 p.m. The local health and wellness expo will begin after the awards ceremony and continue through Farmers' Market.