Josh Cooley directs this fourth feature in the Toy Story franchise. This time around, Woody must convince his toy pals to welcome a new addition, Forky, into their fold, even though Forky is just a spork made into a toy in arts and crafts class by their child, Bonnie. When Bonnie's family goes on a road trip, Forky takes off, so Woody and a few other toys go in search of him. (100 min.) 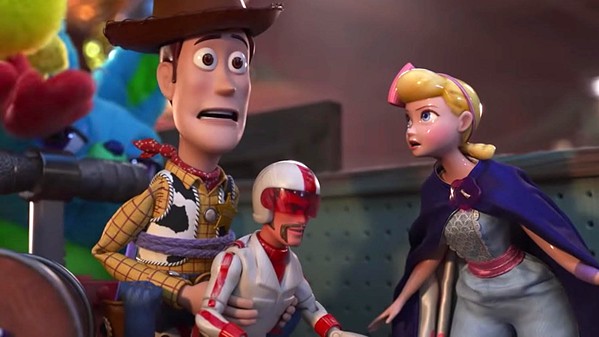 Caleb When I first heard Toy Story 4 was in the works, I felt betrayed and bewildered. Toy Story 3 had such a finality to it, why try to follow a nearly perfect ending to the series? The last time we saw Woody (voiced by Tom Hanks), Buzz (Tim Allen), Jessie (Joan Cusack), and the rest of the gang, Andy had donated them to a new owner before going away to college. It was a heartfelt goodbye, and a fitting close to the trilogy—back when we were under the impression that the Toy Story saga was indeed a trilogy. So why keep going? Well, money of course! Little did I know Pixar's more noble intentions for this installment, which surprisingly opens the door to countless more adventures—for some characters more than others (no spoilers here though, don't worry). I'm stoked to report Toy Story 4 isn't the petty cash grab I was expecting, and believe it or not, I actually enjoyed it even more than Toy Story 3. Fight me! Neither film is on par with 1 or 2 in my book, but wow does this one get pretty darn close. There's a really genuine story here, which can't be said of too many fourth entries in a series.

Karen The gang's back together in the little loving hands of Bonnie but the experience is a little different for Woody. He isn't the favorite toy anymore—I mean, he had competition with Buzz years ago—but Woody isn't being picked as often as the other toys these days. And he isn't really the leader of the pack anymore, either. Dolly (Bonnie Hunt), a veteran of Bonnie's room, calls the shots. Bonnie is going to start kindergarten and Woody thinks he should go with her to watch over her. It isn't this cowboy's first rodeo. But Bonnie comes home with not one toy but two. The new arts and craft project come to life is named Forky (Tony Hale). He was made out of a spork, play dough, a popsicle stick, and googly-eyes, and a fuzzy pipe cleaner. But how is Forky alive? I don't know, but I'm here for it. Forky doesn't understand that his new purpose is to be a toy; he thinks he belongs in the trash. So he tries numerous times to make a dive into the trash can but Woody isn't going to let him go—Bonnie wrote her name at the bottom of his popsicle feet, after all. The adventure begins when Forky throws himself out the window of the family RV and Woody believes his sole mission is to make sure Forky stays in Bonnie's life.

Caleb The Forky stuff is just the tip of the iceberg though. There's so much going on in this movie. And in my opinion, Forky gets upstaged by at least four other new characters. I'll start with the villain, a 1950s pull-string doll named Gabby Gabby (Christina Hendricks), who Woody and Forky encounter in an antique store on their journey back to Bonnie. Just in case the creepy doll vibe isn't already eerie enough, "Midnight, the Stars, and You"—you know, the ballroom song from The Shining—starts playing as Gabby Gabby sits in a baby carriage, steered by her posse of demented ventriloquist dummies. I won't reveal her insidious intentions, but like most memorable villains, things aren't so black and white. The film does a great job of exploring her side of the story, and we come to sympathize with Gabby Gabby's plight, just not the means she uses to rectify it. Some other great new characters include a perfectly cast Duke Caboom (Keanu Reeves), a Canadian daredevil action figure, and the duo of Ducky and Bunny (Keegan-Michael Key and Jordan Peele, respectively), a couple of plush toys stuck on the prize rack at a carnival. Those three collectively deliver the best punch lines in the movie, hands down. But in all seriousness, the most badass character in the film is series veteran Bo Peep (Annie Potts), who gets a well-deserved return to the franchise.

Karen It wouldn't be a Toy Story film without some new friends who were perfectly cast. But it was so nice to see the familiar faces and hear the voices of the original Toy Story crew. For me, this story stood out from the rest of the franchise because it gave a whole other feeling to toys. First our minds were blown by toys that thought and lived beyond the worlds we gave them when we played with them—and fought over who was the favorite. We learned that toys could feel abandoned once we dropped them off to Goodwill and then given purpose once again when another child gets them. But what happens when that's not enough? Toy Story 4 was definitely a well thought out story that we didn't know we needed. Getting to follow Woody on his life adventure to finding himself was wonderful. I'm glad another generation of kids can fall in love with the gang. To infinity and beyond! Δ