Tradition isn't the only option

Becca Carsel was frustrated, so she founded a school.

That statement may have oversimplified the actual process as well as the background, the work, and the other people involved but the sentiment is right on target. 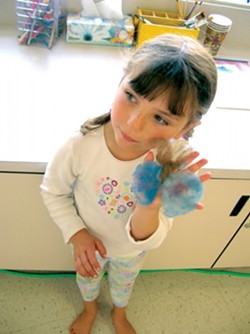 # Carsel and her husband, Matthew Chirman, have a daughter who's now old enough to begin a formal education. Their initial search for a suitable local school for her to attend left them longing for something more than the available options.

"Public schools have become so focused on testing and standards that the children are getting lost," Carsel said. "We both have education backgrounds and wanted

something better for our daughter and our community's children."

She elaborated on what she called the county's limited options, citing a dearth of non-religious private schools and extensive waiting lists that accompany the few glimmers of fresh, educational hope.

Gritting their teeth at the lack of choice, and flying in the face of programs that earnestly seek to leave no children behind and have the rigid testing regimens to prove it Carsel and Chirman took a good look at their masters degrees (both in educational administration), rolled up their sleeves, and created Manzanita School.

The private meaning non-state-funded facility celebrated its grand opening on August 5. Summer camps started at the end of June, and actual classes for 5- to 12-year-olds begin August 28.

The school meets in two classrooms on Grand Avenue in San Luis Obispo, at the former site of Pacheco Elementary. Students will attend classes in groups of their approximate peers, but Manzanita is eschewing highly delineated grade structures.

Carsel explained that the school's philosophy is based on a progressive education, which includes the belief that schooling should be child-centered, "rather than saying everybody who's 8 years old has to be able to do this." Children will interact in a multi-age environment to expose them to a diversity of peers within a roughly three-grade-level window. Carsel is teaching the "upper elementary" group, while Dona Wilson will handle the "primary" kids. Publicity materials for the school describe the program as "project-based, individualized, and meaningful learning."

The approach is definitely an alternative to the mainstream system that pushes every kid into studying California missions in fourth grade, but the very word "alternative" is loaded with enough connotations to send more tradition-minded parents packing.

"Alternative is such a wide spectrum," Carsel admitted.

She went on to explain that, as educators at a progressive school, Manzanita staff can pick and choose teaching methods from other programs. For instance, the new learning center shares some space under the alternative umbrella with Montessori schools, but it's not really connected to that teaching philosophy.

"We're more eclectic," Carsel said. "We pull also from public school best practices, some of the art in Waldorf all the things we see that will work for the kids."

That potpourri of practices should, in theory, connect children 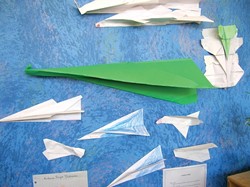 # with methods and topics that will help them learn as individuals. That theory, however, can make those aforementioned tradition-minded parents skittish.

Carsel conceded that concerns depend on the parent. Moms and dads unwilling to think outside the standardized curriculum wouldn't dream of jeopardizing their future Stanford graduate's chances. A growing group of homeschoolers, however, is realizing that there's life and a future outside of the establishment.

"Homeschoolers get into Stanford all the time," Carsel noted.

She also said that children choose not to learn if they're not interested. To that end, she doesn't want to waste their time. They may be sitting in stereotypical desks in stereotypical classrooms for a prescribed amount of hours a day, but their mere presence doesn't mean that they're learning. Some simply tune out.

Part of the pressure for occasionally mind-numbing standardization comes from the assumed premise that all kids are someday going to college, where they're going to have to study hard. Therefore, Carsel hypothesized, they're going to have to study hard in high school. And before that, middle school. And before that, kindergarten, where children who can barely contain their own bladders are now filling out standardized dittos and sometimes "failing."

Still, bucking the norm can be scary, and Carsel understands that counter-cultural schools like Manzanita can be a leap of faith. It's not for everyone, but that's sort of the point. No two kids are alike, so what works for one may not work for 100 others, or 20 others, or even one other.

Ultimately, Carsel said that her explanations and descriptions of Manzanita's basic operating principles fall short of completing the picture. With a half-full enrollment of 15 kids set to start at the end of the month, however, that picture will soon come to life.

"It will definitely be a lot easier to show what we're doing," she said.

The last vestiges of Manzanita's summer camp gave visitors to the school's grand opening some idea of what's in store for the coming year. In one classroom, a list of chores revealed names inked next to individual tasks: garbage, sweeping, dishes, vacuuming, watering the garden. An open patio provides ample room for growing sunflowers. There's a costume corner, bookshelves laden with familiar and new titles, bugs painted on the walls, a bowl filled with shed snakeskin, and children's collages exploring everything from desert animals to aspects of the ocean.

A large board features questions written in scrawling print by young hands under the heading "I wonder?": "How do butterflies survive the hot summer?" and "What do the words on the nutrition labels mean?"

Wilson, the primary-class educator, proudly showed off projects her summer students had completed. Tactile explorations that lead to more structured projects can help even fidgety kids focus. Wilson encouraged her students to model with beeswax while she read to them.

One boy, who loved creating and flying paper airplanes, prompted a study of balance, weight, aerodynamics, and more. A squadron of folded craft graces one classroom wall, accompanied by a bar graph detailing flight distance and an essay on experimental paper-airplane features that affect loft, course, and travel.

"[We're here] to meet the needs of kids who don't fit in this box that's getting narrower and narrower," Wilson said.

Carsel echoed that statement while emphasizing that she's not out to "loot" other schools of students. She just wants to be an example of what else is out there, what reaches beyond the idea of children as assembly-line widgets or square pegs being pounded into state-mandated-and-policed round holes.

More options
Manzanita School Director Becca Carsel noted that the former Pacheco Elementary site on Grand Avenue, where her program holds classes, is becoming a center for alternative education. She said that three of her neighbors offer a diversity of options: Olive Grove Charter School, the Central Coast Village Center, and the Classical Academy.

For more information about the academy, which serves kindergartners through 8th graders with combined classroom instruction by credentialed teachers and home school instruction by parents, call 748-4048 or e-mail info@sloclassicalacademy.com.

For more information about the village center, which seeks to build a strong community of children, families, and adults through nature-based and alternative educational programs, call 541-9900 or visit centralcoastvillagecenter.org.

For more information about the charter school, which will plan, monitor, and assist in the education of K-12 students in a home-school learning environment, call 543-2701 or visit www.losolivosschool.com and click on "Olive Grove Charter."