Tradition on the menu

Who would've thought a new Italian restaurant opening between two other Italian eateries on San Luis Obispo's Monterey Street--both well established and popular with locals--would stand a chance of surviving?

After meeting the charming restaurateur Josephine Van Ness, I walked away impressed by her passion for the restaurant business, especially after learning she grew up in her family's Italian restaurant, Rosa's in Visalia, just like her cousin chef Doug 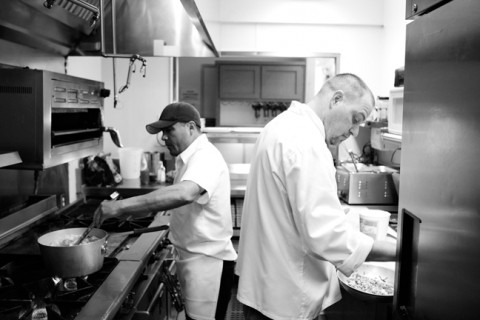 # MacMillan did in his family's Rosa's Restaurant.

The words "sempre famiglia" on a faux stone marker greet everyone entering Naples Ristorante Italiano, providing a telling glimpse of Josephine and Larry Van Ness, who own and run their Italian eatery. It's all about family, but Josephine admitted: "I didn't want to name the restaurant "Rosa's" because Doug has that name." The Pismo Beach Rosa's was founded by Ida and Bill MacMillan in 1988. Just as the MacMillans know nearly every one of their guests on any given day, Josephine said she wants to get to know her customers and their families. The cousins carry on a tradition started 45 years ago by their parents.

Josephine's father (Carmine Cristallo) and Doug's mother (Ida "Rosa" MacMillan, nee Cristallo, who passed away last year), were brother and sister. After emigrating from a small town near Naples, Italy, to Visalia, the Cristallo siblings opened the first Rosa's. When their five sisters joined them in the United States, they created a string of family-run restaurants, all named Rosa's.

Josephine and Larry Van Ness were newlyweds in 1994 when they opened a Rosa's in Tulare. They sold it in 2005 to begin anew in SLO, which Josephine said was partly motivated by San Luis Obispans' appreciation for good food. She explained that while running her first version of the family eatery in Tulare, regular customers affectionately called her Rosa. The original Rosa's in Visalia has served classic Italian cuisine for 45 years, and it's still managed by Carmine, his wife Maria, and their sons.

Just before their unannounced opening in SLO, Josephine and Larry took their children--Mariangela, 11, and twins Mason and Makayla, 9--to the city of Naples. They were so inspired by the traditional family-style dining, they named their new restaurant after the Old World city. Josephine shared the sweet story of her son Mason: "He was upset when we sold the Tulare restaurant. We soothed him with the promise we would soon open another restaurant that he and his sisters would be part of, too."

Naples' contemporary decor is reminiscent of the French bistro there before it, but the menu is just what you'd expect in an Italian trattoria. Josephine pointed out that many SLO Italian restaurants offer the upscale foods of the North.

"Most northern Italian-style restaurants are a bit higher priced," she said. "We wanted to offer an affordable menu and wine list."

Everything--from the certified premium New York steak and old-fashioned cioppino chockablock with shrimp, swordfish, clams, and mussels in the house red sauce--is priced at less than $20 per entree. But with antipasti and pizzas averaging $7.95 to $12.95, respectively, first courses aren't much lower at Naples than in other restaurants.

The wine list offers an array of gems from the Central Coast and Italy at fair prices, from $20 to $40 for most selections, and by-the-glass prices from $5 to $9. I appreciated their efforts to offer great bottles of Central Coast selections--like Ken Volk, Kynsi, and Taz--as well as selections by-the-glass from Baileyana, Orchid Hill, and Per Bacco.

I first visited at lunch with my editor, and we were suitably impressed, despite a few discrepancies. They're quick to bring over a plate of warm bread with olive tapenade when you're seated. I praised them for the tender calamari fritti with its perfectly crisp coating. It's easy to overcook the tender cephalopods. We both agreed that we liked the special pastas offered that day. My order of linguini with frutti di mare--a mix of bay shrimp, mussels, and clams with one large prawn crowning the top--was perfectly al dente and satisfying. I especially liked the spicy (but not overly hot) marinara sauce.

During my next visit with a friend, it was clear that the food was improving. I enjoyed a comforting bowl of minestrone soup rich with veggies and pasta, nicely highlighted with a light touch of tomato. This time, I ordered the penne al forno: al dente tubes dressed in marinara sauce and topped with mozzarella--my idea of soul food because it's so satisfying. That said, I enjoyed the marinara more the first visit because it had more kick. We tried two desserts--a decadently rich cheesecake with raspberry sauce and a delightful white- and milk-chocolate eclair-like dish with ice cream that was irresistible, even though I rarely eat dessert.

My only complaint about Naples: The staff is overly zealous in attending to the table--though, admittedly, that's far preferable to the reverse. Still, all that attention interrupts my enjoyment of a meal. There's no doubt Naples will continue to improve thanks to the Van Ness family behind it, who make dining here like sharing a meal with your extended family.

The 14-year-old Lund's Wine & Gift Shop in Arroyo Grande is once again offering wine tasting from noon to 4 p.m. This time, however, owner Bob Lund is featuring two distinctive, small production wineries from the Arroyo Grande Valley wine region: Toucan Wines and Wedell Cellars. You'll find both of these wineries pouring samples of Zinfandel and Pinot Noir, respectively, plus other treats every Saturday at $5 per person to taste both brands. Couples can elect to share one tasting.

When it was announced in The Tribune that chef Jose Dahan was executive chef at the new Marriott Hotel in SLO, locals assumed that Dahan had closed his popular Et Voila on Los Osos Valley Road (near Costco). He didn't close it, but business dropped off dramatically.

Dahan still offers his delicious traditional French dishes at the bistro--just as he always has--with three courses for $16.95. His excellent wine list offers French and Central Coast wines at $6 to $8 a glass. It's one of the best lunch deals in the county. While there, sign up for e-mails of his special ethnic dinner events and wine tastings, and you'll receive a complimentary beverage.