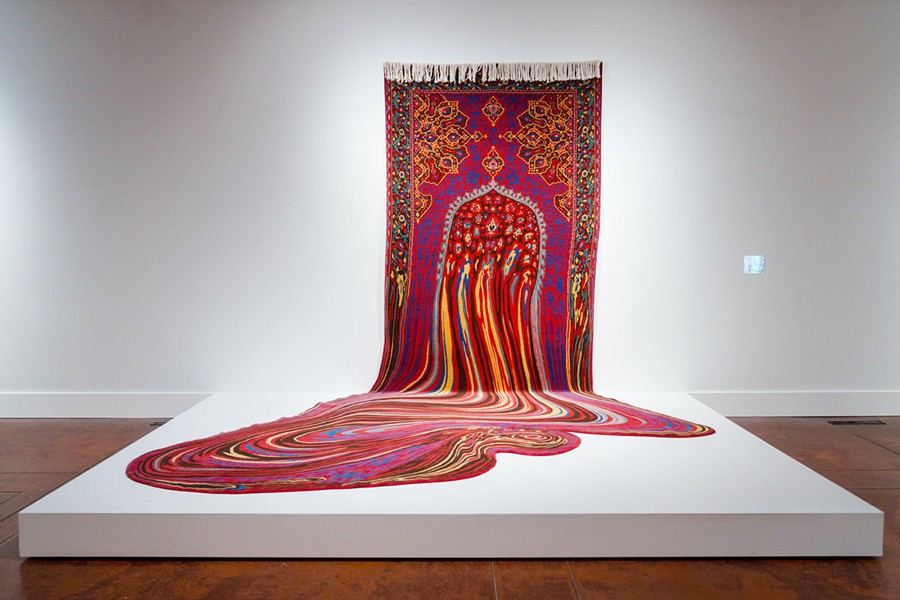 Faig Ahmed: Collision is internationally recognized Azerbaijani contemporary artist Faig Ahmed's retrospective of work spanning from 2016 through 2021. The exhibition, which is installed at the San Luis Obispo Museum of Art through May 15, marks the first time the artist's works have been presented on the Central Coast. The exhibition is sponsored by Hotel San Luis Obispo, Vespera Resort on Pismo Beach, and the city of San Luis Obispo.

Persian carpets are undeniably beautiful and historically important. Examples as old as 400 B.C. exist in museums, and to this day their creation and use is an integral part of the cultures of the Islamic and Arab world. For Azerbaijani contemporary artist Faig Ahmed, this ancient tradition marked a perfect place to meld his contemporary ideas.

His work has been described as psychedelic, surrealist, and distorted, and yet it also clearly pays attention and homage to traditional Azerbaijani weaving techniques. What balance is he trying to strike between old and new?

"There is a certain distance between opposites where the field is most vital," Ahmed explained via email interview. "I seek this balance. This balance is expressed in the local language, traditional Azerbaijani art, which reacts and transforms as radically and unexpectedly as global trends."

Using a team of veteran weavers, Ahmed is able to bring his ideas to life. He was trained as a sculptor, and indeed, many of his carpet designs use visual illusions to create the appearance of three dimensions. What led him to textiles and carpet-making?

"This is not a question of changing the material but a question of [my] thinking changing. As an artist, I returned to the ancient local material to speak with the modern and global," he said. 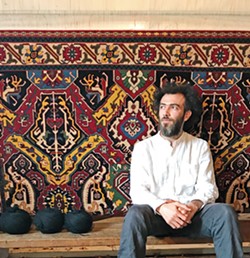 Ahmed's current San Luis Obispo Museum of Art exhibition is a real coup of the Central Coast. As Nina Levent, director of NYC art gallery Sapar Contemporary noted during her remarks at the Feb. 11 opening, it would be considered a major exhibition in New York, LA, or one of the capitals of Europe.

"I've never seen these two major works in the same room together," Levent explained, gesturing to the installation, "and there are two more brand new works I'm seeing for the first time. Every knot is applied by a human weaver and can take three to six months to complete, and it's so very special to see so many of his works together. This is the most comprehensive mid-career retrospective I've seen of his work."

In addition to Levent, we can thank SLOMA's new executive director, Leann Standish, for the exhibition. She's breathed new life into the museum and instigated major new programs including murals and monumental sculpture. We can also thank Chief Curator Emma Saperstein, who relentlessly pursued the Ahmed exhibition.

During her comments at the opening, Standish said Saperstein "stalked" Faig in pursuit of the show: "These kinds of exhibitions don't come together on their own."

It really is a remarkable collection of work. Some people were literally moved to tears by its beauty.

What is the meaning of the carpet in Azerbaijan? Why is it so important in Ahmed's culture? 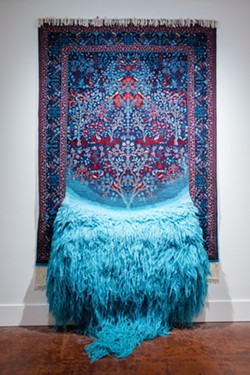 "A carpet in Azerbaijani culture is an object created by a woman who learned it from her mother or grandmother," he said, "and so it goes on for thousands of years. I see this as a metaphor for the preservation and change of culture, both in the object and in the behavior of society. Thousand-year-old Zoroastrian rituals and holidays have been preserved in Azerbaijani culture, but along with this, we are also celebrating Halloween here. Also, the carpet is used as an object and as a symbol from wedding ceremonies to funerals."

Because carpets are so deeply engrained in the culture and have such a long and honored tradition, does Ahmed ever get pushback for being irreverent with his contemporary designs?

"I always agree with such people and immediately suggest that they give up everything new because it disrespects the old," he quipped. "But of course, it is evident that without renewal in culture, it is not possible to be in harmony with the evolving global culture." Δ