You know how certain bands remind you of certain periods in your life? Or how certain bands make you feel like a cool, hip insider who knows about something special and arcane that others are blind to? That’s the way it was for me with both Wilco and Jonathan Richman.

Wilco—and Uncle Tupelo, the band from which it germinated (and Sun Volt, natch)—is pure ’90s to me, and when Wilco worked with Billy Bragg to set two albums of unrecorded Woody Guthrie lyrics to music (a collaboration rife with internal problems, by the way), I decided they were the most amazing band ever. Those Mermaid Avenue CDs are incredible!

Fronted by Jeff Tweedy, Wilco has continued to record great albums while remaining consistently outside the mainstream. Their music simply can’t cross over to commercial radio, but they remain darlings of the aging alt-rock hipster crowd. They’ve remained true to their ideals and refused to pander to the masses, which has made their fans feel super cool and “in the know.” How many bands can do that?

Jonathan Richman, on the other hand, was around when I was in high school, but I wasn’t cool enough to discover him yet. It wasn’t until I was working at KCPR in the early ’80s that I reveled in his wicked sense of humor and deadpan delivery … and learned about the seminal effect of his early work on late-’70s punk rock. Again, once I knew who Richman was, I felt like an insider, and the rest of the world didn’t catch up until There’s Something About Mary came out in 1998 and gave this iconoclastic rocker another career boost.

Now these two acts are coming together thanks to Bruce Howard and Otter Productions, Inc., who somehow knew exactly how to tap into my deep well of nostalgia about my perceived hipster musical past. Gates open at 2 p.m. at the Avila Beach Resort for this 3 p.m., Saturday, Sept. 29, show. Tickets ($37) for this all-ages show are available at all Vallitix outlets by calling 1-888-825-5484, or online at vallitix.com.

Speaking of nostalgia, Wilco and Jonathan Richard aren’t the only blasts from the past hitting the Avila Beach Resort this week. On Wednesday, Oct. 3, Orange County punks The Offspring will bring their incendiary sounds to the beach (all ages; 6 p.m.; $35) at all Vallitix outlets), with Neon Trees and Dead Sara opening.

Formed in 1984, The Offspring sprung from the same fertile grounds as Social Distortion, Circle Jerks, The Adolescents, Agent Orange, The Vandals, Wasted Youth, and T.S.O.L. They were also in part responsible for popularizing punk rock and bringing it more into the mainstream.

Their most recent release, Days Go By on Columbia Records, find the band in good form. Just last month, they performed the title track on NBC-TV’s The Tonight Show with Jay Leno, show just how far into the mainstream they’ve pushed punk rock.

Remember, this is the band’s ninth album! They’ve been around forever, and they can still write arena-sized hooks driven by ripping guitars on track such as “OC Guns,” “Cruising California (Bumpin’ in My Trunk),” “Dividing by Zero,” and “Slim Pickens Does the Right Thing and Rides the Bomb to Hell.”

The band has performed more than 1,100 shows across the globe and sold more than 36 million albums worldwide, and their 1994 release Smash remains the highest-selling album of all-time on an independent label. Not too shabby, eh?

What the hey? Wilco, Jonathan Richman, Offspring, and Elvis Costello all in the same week? Good lord! Yet it’s true: Elvis Costello plays at 8 p.m. on Saturday, Sept. 29, at the Performing Arts Center in a show he’s calling 2054—The Centenary Show.

In press materials, Costello explained, “This show may contain any song I’ve written. Some you will know already, some are the hits of tomorrow. I’m playing this show now in the unlikely event that I’m not around to perform the songs on the appointed date. [So] don’t be late; we’re going to have a big time.”

Will he start out with his first hit, “Less Than Zero?” Or something else off his 1977 debut My Aim Is True, like “Alison” or “Watching the Detectives”—songs that were staples of my high school years?

I’ve remained a fan throughout his entire career, right through forays into country music on Almost Blue and classical music like The Juliet Letters. But what he really knows how to do is rock, and his list of hits is vast indeed: “(What’s So Funny ‘Bout) Peace, Love, and Understanding,” “(I Don’t Want to Go to) Chelsea,” “Pump It Up,” “Radio Radio,” “Clubland,” “A Good Year for the Roses,” “Man Out of Time,” “Every Day I Write the Book,” “Veronica,” “Lipstick Vogue,” “Beyond Belief,” “Shipbuilding,” “New Lace Sleeves,” “(The Angels Want to Wear My) Red Shoes,” and “My Funny Valentine.”

Tickets range from $55 to $85, available online at calpolyarts.org.

Steve Key’s Songwriters at Play keeps coming at you with the best in singer-songwriter music, and they kick off their weekly series of showcases on Thursday, Sept. 27 (6:30 p.m.; all ages; pass the hat), with a Paul Simon tribute at the SLO Down Pub. Hear renditions of his Simon & Garfunkel hits through his Graceland numbers. Performers include L.A. jazz guitarist Jack Kovacs, Santa Barbara's Kat Devlin and Nicola Gordon, and Central Coast musicians Chick Tuesday, Rob Kimball, Holly Ann Phillips, Steve Kindel, Debra Windsong, and Steve Key.

On Sunday, Sept. 30 (1 p.m.; all ages; pass the hat), at Sculpterra, award-winning vocalist Brent Michelle headlines the showcase. She just returned from Israel, where she was one of 14 finalists (out of hundreds of submissions from around the world) in the Hallelujah Final Singing Competition. Brent will be accompanied by John Gannon of The Wicked Saints on vocals and percussion; John will also play his own songs in a guest set, and other performers include Charlie Baty, formerly of Little Charlie & the Nightcats, joined by Dawn Lambeth’s trio. Baty and Lambeth will also play that same day at 4 p.m. in D’Anbino Tasting Room ($10 at the door). 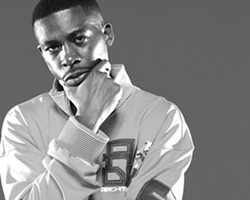 SLO Brew has a couple Thursday shows book-ending the week, starting with hip-hop star GZA on Thursday, Sept. 27 (8 p.m.; all ages; $26 presale or $30 at the door), and then an empty club until Thursday, Oct. 4, with The Young Dubliners (8 p.m.; all ages; $15 presale or $17 at the door). GZA, he of The Wu-Tang Clam fame, brings his street-smart East Coast style to the club, performing material from his newest album, Legend of the Liquid Sword. Killer Mike and Sweet Valley will open. The Young Dubliners’ most recent album is the excellent 2009 release Saints and Sinners, and they’ve got local rockers Truth About Seafood opening.

While the stage is set up, why not keep the music going? The Avila Beach Resort, in addition to bringing you Wilco, Jonathan Richman, and The Offspring, will also be host to up-and-coming hip-hop artist Malcolm “Mac Miller” McCormick on Friday, Sept. 28, with doors opening at 4 p.m. for a 5 p.m. show (all ages; tickets at Vallitix). Previously known as Easy Mac, Mac Miller hails from Pittsburgh, taught himself to play piano, guitar, drums, and bass by age 6, and then got “serious” about music as a teenager. “Once I hit 15, I got real serious about it and it changed my life completely. ... I used to be into sports, play all the sports, go to all the high school parties. But once I found out hip-hop is almost like a job, that’s all I did.” Travis Porter and YG will open the show. On a side note, Mac Miller was a presenter at the VMAs on MTV a few weeks ago. Looks like you made it!

This Friday, Sept. 28, at 8 p.m., Painted Sky Studios in Harmony will present an evening with Red House Records recording artist and Michigan singer-songwriter Drew Nelson (all ages; $20; 927-8330). He’ll be performing songs form his new album Tilt-A-Whirl, and his sound is described as “mixing Springsteen’s roots-rock sounds with the folk storytelling sensibility of Nanci Griffith.”

HayDudes hits the intimate Painted Sky Studios stage on Sunday, Sept. 30, at 7:30 p.m., and this one’s going to be a must-see for bluegrass and Americana fans. I mean, just listen to this trio’s line-up: mandolinist Kenny Blackwell (a student of the great Jethro Burns and member of local acts such as Little Black Train, The Mystery Trees, The Demos, and Kenny Blackwell & Dorian Michael), mandolinist and guitarist Mike Mullins (who’s played with David Grisman, The Acousticats, the Phil Salazar Band, and the Cache Valley Drifters), and bassist Wally Barnick (of Cache Vallley Drifters fame). I’ve been listening to their debut self-titled album featuring guest performers Byron Berline and Dennis Caplinger, and it’s a pickin’ and grinnin’ and harmony singin’ hoot! Tickets are $20, available by calling 927-8330.