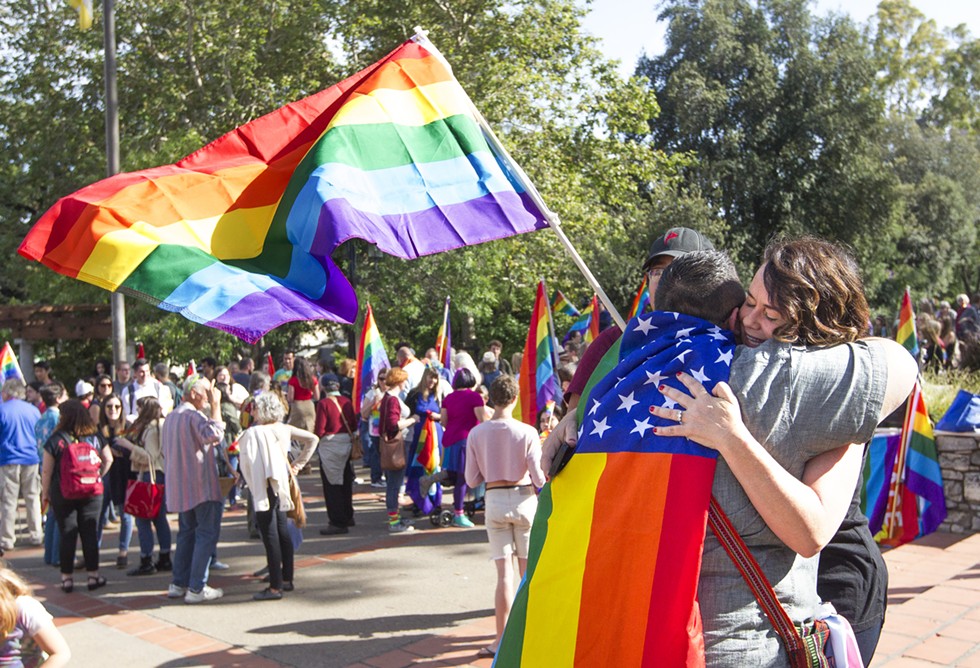 The first was bold determination. Heumann was trailblazing San Luis Obispo's first-ever Gay Pride celebration. As then co-president of the Gay and Lesbian Alliance of SLO County (GALA), Heumann could take the reins of the event, and he envisioned a Central Coast Pride that would make a significant cultural impact in the community.

But nagging trepidation accompanied Heumann's ambition. No organizers at the GALA Pride Center—a small half of a duplex on Chorro Street—could predict how the community would respond to the idea. It had been nearly 30 years since the first Pride marches in San Francisco, yet Heumann and the GALA organizers knew SLO's conservative and the ways that the Central Coast was lagging in accepting (much less embracing) LGBTQ identities.

"We were expecting real blowback," Huemann said. "At that time, we were very worried."

Ellen Sturtz, one of the Pride organizers and a former county employee who was still closeted at work at the time, said she remembers that fear viscerally. 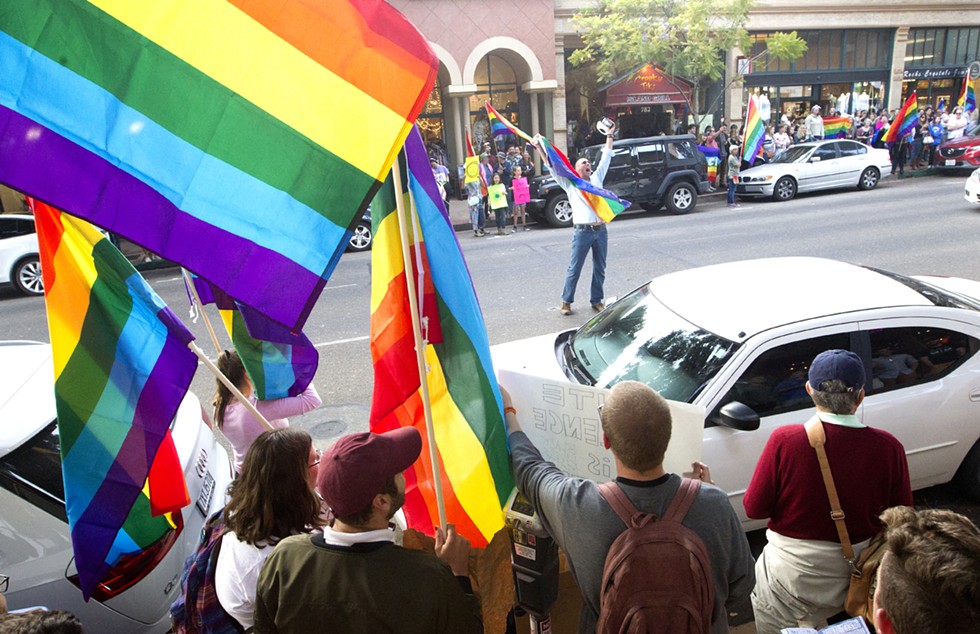 "I was scared shitless," she said. "Having moved here in 1994, and working in the unincorporated areas of the county, I was aware of how conservative our community was—and still is."

The GALA leadership and volunteers found a balance between expressing uncompromised pride and exercising appropriate caution. Heumann did land Mission Plaza as the location for Pride's now well-recognized finale event—Pride in the Plaza. But Heumann also made sure GALA hired undercover security and even gave security training and walkie-talkies to volunteers who could be extra sets of eyes.

To promote harmony, GALA leaders sought to integrate straight and religious allies into the events. Radio host Dave Congalton wrote columns of support in the Telegram-Tribune. Sturtz met with clergymen and women who agreed to attend and speak in support of Pride and the LGBTQ community.

"We had six [religious leaders] lined up, one for each hour to combat what we were expecting from some religious folks who were decrying it," Heumann said.

Aside from one family protesting on the outskirts, Pride in the Plaza—and the entire Pride week—went without any of their worst fears coming true. It was a great success, with events through the week from spiritual to picnics in the park, to a movie night at The Palm. GALA set the blueprint for what would be repeated each July in SLO for the next 20 summers: a community-oriented, family-friendly, peaceful celebration of the LGBTQ community.

"It was probably one of the most phenomenal experiences of my life," Sturtz said. "I look back and think of how fortunate I was to be a part of an event that took months to organize, that people were just so devoted to creating. We had a blank canvas. It was up to us. There was no model for it. We had to decide how it was going to look here." "A lot of people just pitched, in and there was tons of help putting it all together," Heumann added. "It brought a lot of people together and everybody saying, 'We gotta do it again.'"

Over the years, GALA and Central Coast Pride went through a natural evolution, but the format and theme of Pride Week the same as in 1997. In 2001, Robert Kinports became chair of the Pride committee and led a restructuring of how GALA planned and fundraised the events, making it more sophisticated and efficient. Kinports is leading his last Pride this year after a 16-year run during which he's helped land high-profile performers like Joan Rivers, Margaret Cho, Wanda Sykes, and Lisa Lampanelli.

"We've become a cohesive bunch," Kinports said of the committee. "It's gotten easier and easier [each year]."

In addition to the many new faces and organizational changes taking place along the way, current events and the broader political climate can dictate the tone and energy of pride in a given year.

Debates raging in other states over the balance of religious freedom and discrimination laws as well as transgender rights are also at the forefront of Pride this year.

"We have very good protections from the LGBTQIA standpoint in this state. We're lucky," Kinports said. "But the other 49 states in the country aren't necessarily so lucky. [Neither are] the other countries in the world where you're put to death for being gay. There are people out in the world we still have to look out for." 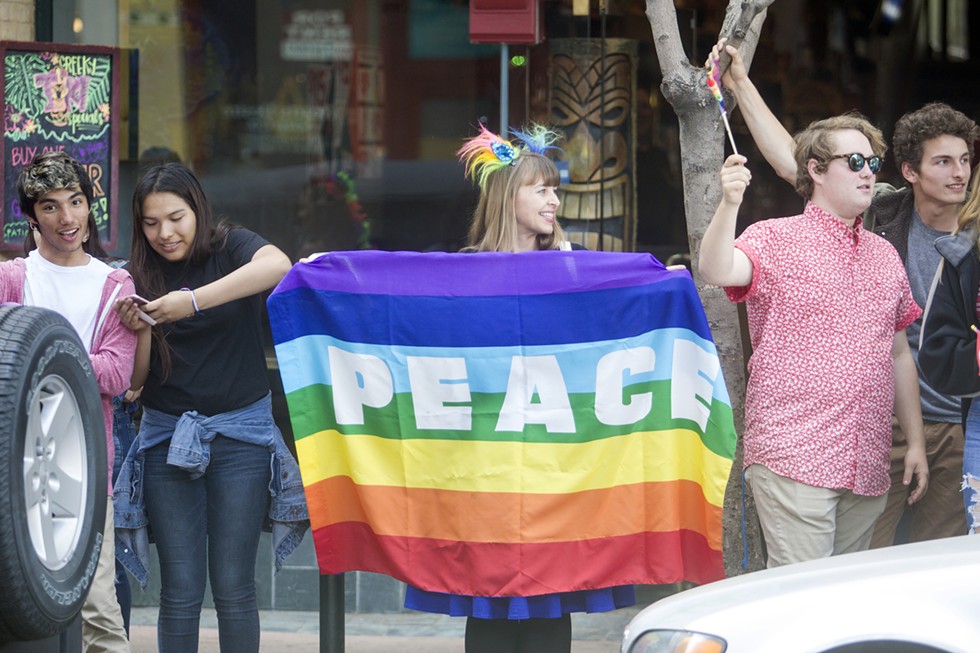 "We're an activist group that looks at many intersecting issues," Grace said. " around the world are so corporatized, and they're monetized. Companies are using queer identities as a way to make more money."

The Cal Poly QSU is also advocating for a downtown march during Pride this year, which would be Central Coast Pride's first-ever . While a march or parade was originally discarded as too controversial back in 1997, Kinports said he hopes to accommodate the students' activism while also being cognizant of what's possible with their available resources.

"There's a lot of grassroots activism that has been reinvigorated ... because of the political climate in the country," Kinports said. "We encourage people to come out and participate. We like that, and we like ideas." Δ