SLO County Parks and Recreation staff are asking the county’s Board of Supervisors to quash a proposed plan to relocate a popular hiking trail to Pirate’s Cove.

The upcoming vote is the latest chapter in the saga of one local landowner’s quest to move the Ontario Ridge trail off his property. 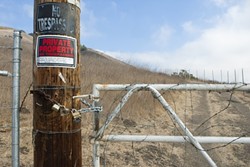 Last year that land owner, Rob McCarthy, submitted a 19-page application for a minor use permit which, if approved, would move the public trail north and allow him to install fencing and signage. The proposed trail would still partially cut through McCarthy’s property, but would avoid the site where he hopes to build a luxury home.

But before the permit can go before the SLO County Planning Commission for approval, McCarthy needs consent from the county, which owns the public trail. In a staff report released March 2, SLO County Parks and Recreation Supervisor Nick Franco recommended the supervisors not give their consent to let the permit move forward.

“County parks believes that the proposal is inconsistent with the policies of the Parks and Recreation Element and is not consistent with the public’s best interest because it will require a reduction of services in other areas in order to maintain this trail and will be difficult to manage due to the lack of connectivity between two publicly accessible points,” the staff report stated.

The back-and-forth over the trail is part of a years-long battle. In 2014, McCarthy came under fire after he installed fences and  “no trespassing” signs along the trail. The California Coastal Commission ordered him to take the fences and signs down that same year.

Even if the supervisors vote in favor of McCarthy and against Franco’s recommendation, the permit would still need to be approved by the county Planning Commission, and their decision could be appealed back to the board.

The dust-up over the Ontario Ridge trail isn’t the first time property owners on the bluffs overlooking Pirate’s Cove have clashed with hikers and beachgoers. Earlier this year, the California Coastal Commission’s enforcement arm ordered the homeowners association for The Bluffs at San Luis Bay, a gated community of multi-million dollar homes, to remove and change no trespassing signs along a public trail on the bluffs above the Pirate’s Cove Beach because they might discourage public access.

The supervisors will vote on McCarthy’s permit March 8.