Take a beautiful ride all the way to well, just take a nice ride

There was a big to-do on Feb. 15, the day the newest portion of the Bob Jones bike trail opened. Guests were aptly dressed in spandex and fancy click-clacking shoes, and folding tables were laid out with the full snack spread: coffee cake, punch, little veggie turkey wraps. When the speeches were over, the ceremonial red ribbon cut, and the snack bar ravaged, eager cyclists took to the trail with the city of San Luis Obispo's blessing.

With skies so blue and fresh pavement beneath, the only crisis at this shindig was the trail's abrupt and unfortunate ending. Just when we thought it was going somewhere, the trail stopped unceremoniously about a mile away from the beginning, at the Los Osos Valley Road interchange. 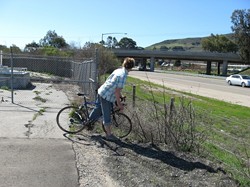 The Feb. 15 event was described as a "dedication," which might lead one to expect that the trail is complete, or at least substantially so. Not true. In fact, for now it's a promising stretch of amputated pavement, disconnected from the parts that will someday make this the true "city to the sea" two-wheeled expressway.

The new corridor begins at the corner of Prado Road and South Higuera, adjacent to a grassy area and memorial benches. From there, the trail winds languorously along San Luis Creek, offering postcard views of San Luis hills to the left, above the natural riparian brush.

The opposite side of the trail, however, gives an opportunity for unfettered views of the city's sewage plant. This reporter actually witnessed what appeared to be black anaerobic sewer sludge moving up an elevator belt and plopping with a satisfying spanking sound into the bed of a city truck below. Sweet. Plus cyclists can get a first-hand look at the worn footpaths leading to the creek--an exclusive passport to Bumsville. (B.Y.O.B., or malt liquor, as it were).

Baby steps. Or, in this case, training wheels.

Despite the brevity of the paved path, there weren't any complaints. It's a relaxing ride, with great views and plenty of spots to stop and take in the glory of San Luis Obispo. But then it ends, quite suddenly, at a metal fence, while a dirt trail continues, untouched--and untouchable--by bike tires.

Eventually, the trail will break through and connect to Ontario Road and ultimately arrive at Avila Beach. But that portion is still a ways off, probably several years. Plans to connect the trail to Los Osos Valley Road, at least, are underway.

Timothy Bouchum, deputy director of public works, said that by the end of next year, construction could start on a bridge to connect to the bike lane on Los Osos Valley Road. A second bridge, over South Higuera, is also being planned.

The prospect of an intercity trail to move bike travel out of vehicular traffic holds terrific promise for bikers. Indeed, a trail that connects to the ocean is almost too good to hope for. The bike ride from SLO to Avila, which the Bob Jones trail hopes to reinvent as a casual, friendlier jaunt, is already popular among cyclists of varying proficiency.

So the Bob Jones trail has potential, and never has that been more evident or seemingly--and frustratingly--less accessible than with the completion of this newest corridor.

Via Bob Jones, cycling longer stretches could become more manageable to beginning riders and young riders who can go the distance, but who shouldn't necessarily be on the street. Just arriving at the trailhead is an adventure that requires cyclists to brave South Higuera, a street with so many driveways, right-hand turns, middle-of-the-road turn lanes, and general opportunities to collide with a car, that a 10-minute bike ride can feel more like running the gauntlet.

Which, I guess, is why the flier suggested parking at (thus presumably driving to) the official dedication of the Bob Jones bike trail's tantalizing promise.