'Transformers: The Last Knight' is a steaming pile of you-know-what

What’s it worth, Anna? Nothing

What’s it worth, Glen? Nothing

Director Michael Bay (Bad Boys, The Rock, Armageddon, Pearl Harbor, Transformers) returns with this fifth—and hopefully final—installment of the bombastic series based on Hasbro toys about two Cybertronian races: the good Autobots and the evil Decepticons. This time around, Autobots leader Optimus Prime (voiced by Peter Cullen) learns his home planet, Cybertron, is dead, and that he’s responsible. He discovers he must recover an artifact from Earth in order to bring his planet back to life, but it will mean the end of Earth. Meanwhile, Cybertronians on Earth—both Autobots and Decepticons—are being hunted and destroyed by the human-led Transformers Reaction Force (TRF), but Cade Yeager (Mark Wahlberg) still believes the Autobots are a force for good, and he works to save them as well as give Optimus Prime a chance to do the right thing even though he’s fallen under the spell of his maker, the sorceress Quintessa. (149 min.) 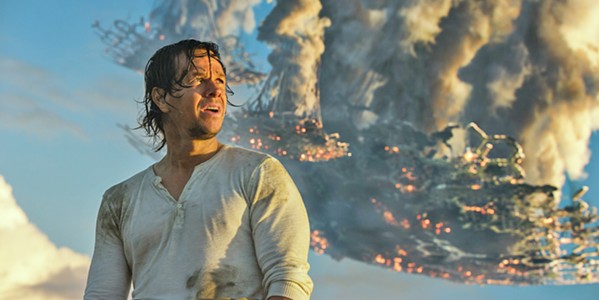 Glen For a guy who’s known for big, dumb spectacles, Michael Bay has really outdone himself. This is the biggest, dumbest spectacle of all—oppressive, incoherent, obnoxious, but worst of all, boring. If it wasn’t for all the intermittent explosions, I might have at least enjoyed a refreshing nap, but instead I was rocked from my slumber by one pyrotechnic display after another. The film’s opening sequence takes us back to A.D. 484, where King Arthur (Liam Garrigan) and his army are facing insurmountable odds in a pitched battle. They’re waiting on Merlin (Stanley Tucci, who seems to be the only actor involved who realizes how silly the whole thing is), who has promised to arrive with a magic object that will win the war. It’s an alien staff Merlin receives from a Cybertronian whose ship crashed on Earth, where he’s remained stranded and in hiding. Fast forward to the present, where some kids have ventured into a Chicago no-go zone patrolled by TRF mechanical soldiers trying to kill Cybertronians. The imperiled kids are saved by 14-year-old Izabella (Isabela Moner), who in turn joins forces with Cade to save the Autobots. It turns out that Cade is “the chosen one,” who receives a metallic talisman from a dying Cybertronian named Steelbane. Wow, this really sounds absurd, and it is. The rest of the film is Cade, Izabella, random hot chick Vivian Wembly (Laura Haddock), upper-crust British gentleman with all the answers Sir Edmund Burton (Anthony Hopkins), TRF commander who “gets” that the Autobots are good Col. William Lennox (Josh Duhamel), and Transformers such as Bumblebee (voiced Erik Aadahl) and Hound (voiced by John Goodman) trying to save Earth from destruction as the planet Cybertron comes closer and closer to Earth, because apparently the laws of physics are not a thing in the Transformers World.

Anna When Rotten Tomatoes scores a film at a whopping 15 percent, I know going in that I’m about to watch a bad movie. Frankly, I’m shocked that Transformers: The Last Knight managed to scrape up that high of a percentage! At a bloated and butt-numbing 149 minutes, I left the theater mulling over how short our lifetimes really are and how much of mine I had just watched circle the drain. It’s a disjointed, jumbled mess of a movie that fails to entertain despite an estimated budget of $217 million. That’s a lot of zeros, people! Most disheartening of all is the end of the film where Bay baits his audience with a setup for the next incarnation of the Transformers franchise, and the snippet didn’t lead me to believe the next script is any more inspired than The Last Knight. The film attempts humor here or there, but the jokes fall flat and the characters behind them are thin at best. I didn’t know what was going on half the time—either because of the overstimulation of explosions or because I was so bored I was mentally working on my shopping list instead of following the storyline. Don’t worry, you can jump back in anywhere without missing much. Bad humor, cheesy dialogue, and over-the-top CGI action are not a winning combo for me, and unfortunately this film is chock-full of all the above.

Glen To be fair, it’s not like any of the previous four Bay-directed Transformers films have been good, but at least the first one—Transformers (2007)—was a bit more coherent and fun, plus it introduced Megan Fox to a sea of fanboys. She and Shia LaBeouf reteamed for Transformers: Revenge of the Fallen (2009), but they couldn’t create the same semi-magic of the first. It’s been downhill after that. In Transformers: Dark of the Moon (2011), Fox was jettisoned for vapid blonde “it” girl Rosie Huntington-Whiteley and the goings-on headed in part to Earth’s moon, increasing the dumbness to new heights. Wahlberg joined the fray in Transformers: Age of Extinction (2014), a title I hoped spelled the end of the tiresome series, but Bay has proven time and time again that he can milk a bellowing CGI mechanical dead cow. You mentioned Rotten Tomatoes, which is a pretty good indicator of how the franchise has slowly slid into irrelevance. The first had a 57 percent critic rating and 85 percent audience score; the second had a 19 critic and 57 audience score; the third, a 35 critic and 55 audience score; the fourth, 18 critic and 51 audience score; and this fifth one, as you mentioned, a 15 critic and 56 audience score. If only around 50 percent of the audience likes these films, why do they keep going back for more? Stop encouraging Bay with your movie dollars! Sheesh!

Anna The guy obviously has a fair amount of pull in Hollywood, and he must be a charmer because the studios keep green lighting one project after the next. Don’t get me wrong; Bay has done some stuff I’ve actually enjoyed. I’ll happily watch Armageddon or Bad Boys or The Rock again, but I’m over the CGI superhero multiple movie kick he’s been on. Just because you can make the movie doesn’t mean you should, Bay. According to IMDB, the next Transformers film is slated to come out in 2019, so I am going to take the glass-half-full approach and just enjoy 2018 as a Transformer-free zone. I realize this review speaks very little to the actual content of the movie. That’s because I can’t for the life of me recall a solid character or piece of the storyline that isn’t discombobulated and boring that I want to talk about. Between the overly sexualized 14-year-old girl, Cade’s lame-ass one liners, and dialogue that ranges from dumb to groan-inducing dumb, there’s nothing that can save this film for me. If you want to scratch that action movie itch, go see Wonder Woman again. All Transformers: The Last Knight will do is lighten your wallet and leave you cross with an explosion-induced headache and the vague sense that a strong drink is needed. ∆