A rubble-strewn 13-acre parcel at 4398 Santa Fe Road sits in limbo, opposite an aging chain-link fence at the SLO airport. The land is one of the county's most recent acquisitions, by way of eminent domain and by some accounts, the county got quite a deal. With a federal grant, the county paid $1.3 million to make room for a new runway.

The property comes with some significant strings, though, in the 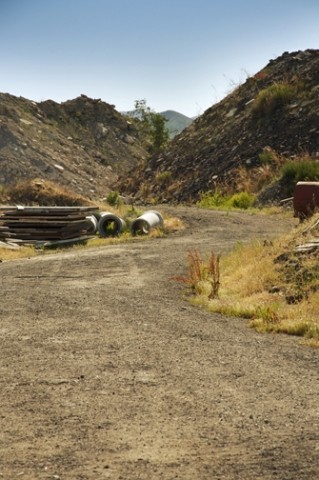 # form of about 180,000 tons of rubble, at least six single-wide trailers, a Volkswagen truck, discarded file cabinets, and a collection of 50-gallon drums, among other items. Not long after the county acquired the de facto dump, the state's Integrated Waste Management Board handed down a notice to clear the property and a full two feet of earth from beneath the debris. The price tag attached to the clean-up could be three times more than what the land is worth.

Where the county and state see trash, however, former property owner Jim Filbin sees treasure. The piles of concrete and the asphalt, the rebar, the trailers, the boats, and the doghouses, all were Filbin's personal property. For years, Filbin stockpiled construction debris on the land, amassing about 110,000 cubic yards of the stuff. For now, the debris is considered part of the land, but Filbin's seeking compensation for its unassessed value. He also wants a higher assessment for the land itself. The matter heads to court May 11 for a preliminary hearing before going to a jury in August.

In 1978, when Filbin bought the land, it was zoned for industrial use, which was the basis for his claimed right to run a waste storage facility, even without a permit. Even after the zoning was changed to agricultural, Filbin claimed his use was grandfathered in.

According to court documents, Filbin clashed with both the county and state over use of his land for more than a decade. Legal tussles ensued when he ignored several orders to cease and desist accepting and processing the rubble. The concrete and asphalt, he contends, are valuable as road base if they're processed. The next closest facilities for dumping are in Santa Maria and Santa Margarita.

The county is entertaining bids that could range from $1 million to $4 million to clear the property, for what could be more than a year's work, depending on the route a contractor takes. A public bid will take place May 17. One of three possible solutions allows the contractor to process the refuse on site and then sell it from the property, provided that it's all gone in about a year and a half. That would have the contractor essentially running the same business as Filbin, now on county land. The rubble may have value, but Andrew Rauch, who's representing SLO County in the eminent domain suit, said that whether or not the mountains of concrete have value doesn't matter because they were collected criminally.

"He's got an illegal dump," Rauch said. "We don't think he should benefit from illegal activities."

Filbin isn't fazed. He's not a young man, and he's used to fighting by now. Given the opportunity, he'll spin stories about the media and the county, about water problems and solutions, really about anything except the upcoming trial. He politely skirts the issue with sudden savoir-faire. Filbin's not convinced of the county's need to take his land, but he's not appealing the eminent domain decision he's appealing for more money. He believes that the property, valued at $100,000 per acre, wasn't properly assessed, and that the value of the concrete and asphalt weren't included. Filbin's lawyer hadn't returned several requests for comment as of press time, and hadn't issued a formal statement in regard to the property's value.