Originally implemented through an executive order in January, the temporary ban blocked citizens from seven predominately Muslim countries—Iran, Iraq, Syria, Lybia, Sudan, Yemen, and Somalia—from entering the U.S. In early February, the U.S. Court of Appeals for the Ninth Circuit rejected the president’s bid to reinstate the ban on the grounds that the administration had shown no evidence that anyone from the seven countries had committed terrorist acts on U.S. soil. The court’s decision backed an earlier ruling by U.S. District Judge James Robart to temporarily restrain the ban. It’s unclear if the Trump administration will appeal the court’s decision or not. 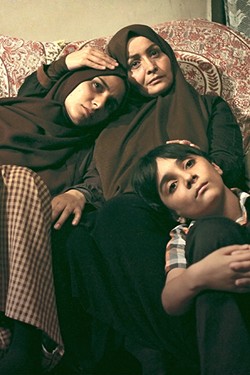 When Hassan Akhondpour found out in June that his film, Fereshteh, Daughter of Ahmad, would be screened at the festival, he said he was excited and planned to attend the event. The 35-year-old Iranian filmmaker, who has never been to the U.S., said he grew up dreaming of visiting America because of artists like Michael Jackson, Marlon Brando, and Robert Redford. But when the travel ban was announced at the end of January, Akhondpour was forced to cancel his plans to travel to SLO.

“The ban is coming from a clearly wrong attitude and vision,” Akhondpour told New Times via email. “He [Trump] wanted to humiliate the Iranian people, and I am not going to travel where a president insults my country for no reason, even if it’s America, where I dreamt about traveling to.”

Although the ban is currently on hold and Akhondpour could technically travel to the U.S., he still needs to obtain a visa. When the ban was originally implemented, he gave up his interview appointment with the U.S. Embassy in Dubai. He said that now there aren’t any appointment slots available in time for him to make the trip to California for the festival.

Still, Akhondpour said he was heartened by the response of the American people and the outpouring of U.S. citizens protesting at airports across the country.

“I was really surprised about American citizens disliking this order,” Akhondpour said. “I was surprised and cheered because of the way American people acted, otherwise Donald Trump has shown us that he can give nonsense orders day by day, only to make an uglier image of the U.S.”

SLO Film Fest Director Wendy Eidson said that the festival receives great films from all around the world, including Iran.

“We hope that sanity prevails and that he’s [Akhondpour] able to come to our festival,” Eidson said. “We’ll greet him with the same warm welcome we give to all visiting filmmakers, plus an extra dose of warmth for what he and his fellow artists in Iran have been through lately.”

Akhondpour’s film centers on the dilemma of a young woman to hold on to her morality or to do whatever it takes to provide for her struggling family. The filmmaker said he hopes the story allows viewers to gain insight into the lives of Iranians, while also raising awareness that the current political climate could leave the U.S. isolated from the rest of the world.

Fereshteh, Daughter of Ahmad will show as part of the SLO Film Festival on March 16 at 1 p.m. at the Fremont Theater and on March 19 at 3:30 p.m. at Mission Cinemas.