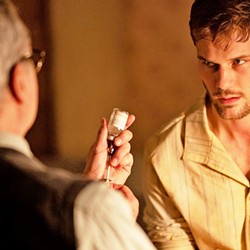 If you're familiar with Robert Ludlum's spy novels or the Matt Damon films about Jason Bourne, a fictional spy suffering from amnesia, then you know that Treadstone is the secret CIA black ops program that trained highly efficient operatives to carry out clandestine assassinations. This series offers a backstory to the program.

Created by Tim Kring (Chicago Hope, Heroes), the story moves back and forth through time from 1973 to the present. In '73, U.S. spy J. Randolph Bentley (Jeremy Irvine) is captured by the KGB, where Petra (Emilia Schüle), a beautiful KGB agent, helps break and reprogram Bentley into a puppet killer. The suggestion is that Bentley later helps the CIA use his experience for their program.

In the present day, dormant sleeper agents connected to Treadstone as well as the KGB's Cicada program begin reactivating, though some malfunction and the endgame is unknown. Some episodes are better than others—I especially like the North Korean plot thread—but overall it's an entertaining spy fantasy that ends with a cliff hanger. The planned second season has been canceled, so prepare to hang indefinitely. (10 44-min. episodes) Δ