Tribute act Cash'd Out returns to SLO Brew on March 21 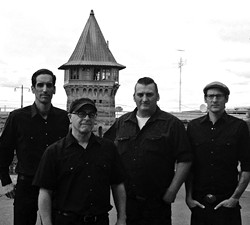 I recently received a signed first edition of former L.A. Times rock critic Robert Hilburn’s new book Johnny Cash: The Life. Cash died in 2003, and he’s long been lauded as one of the most influential musicians of the 20th century. He had an amazing early career, then hit a lull in the mid-’80s (he was a regular on the free stage at the Mid-State Fair) until producer Rick Rubin reignited his career in 1994 with American Recordings, which led to five more albums, two released posthumously. In a few days, his old label Columbia will release Out Among the Stars, a collection of older material. In short, there’s nothing stopping Johnny Cash’s popularity, not even death, and for proof, may I introduce Cash’d Out.

This is a tribute act that works largely because frontman Douglas Benson’s got a great Cash-like voice—grave and mildly monochromatic—as well as Cash’s onstage swagger. It sure doesn’t hurt that Kevin Manuel on guitar, Ryan Thomas on bass, and George Bernardo on drums are a tight unit, and that all four stick true to Cash’s early sound.

Hailing from San Diego, the group’s been called the “next best thing to Johnny Cash,” and they’ve won four San Diego Music Awards for Best Tribute Band, but the best endorsement they’ve had is from their rabid fan base and those who knew Cash himself.
“Cindy Cash [Johnny’s daughter from his first marriage] came to a show, [and] we made her cry, and she gave me a necklace with Johnny’s hair in a glass locket,” explained Benson in press materials, adding that Cash producer Lou Robin has also been to several Cash’d Out shows, and claims that if he closes his eyes it’s like “going back in time.”

Cash’d Out has more than 150 of Cash’s songs in their repertoire, mostly from the Sun Records and Columbia period, and can deliver up to four hours of non-stop entertainment. If you never got to see Johnny Cash at the Mid-State Fair, these guys are the next best thing.

On Saturday, March 22, get your rock’n’reggae on when Thrive headlines a three-act show opened by reggae act Dirty Rice and rock-reggae-blues act Explode the Machine (7:30 p.m.; all ages; $10).

If you’re really looking for some variety and a great value, check out Being As An Ocean and opening acts A Lot Like Birds, My Iron Lung, Idle Hands, and This Wild Life on Tuesday, March 25 (7 p.m.; all ages; $12 presale or $13 at the door). You’ll get a taste of everything from screamcore to ambient to post-hardcore.

Oh, and since this one may sell out, you might want to get tickets now for Reverend Horton Heat on Wednesday, April 2, with opening acts Nekromantix and Deke Dickerson (8 p.m.; 21-and-older; $24 presale or $25 at the door).

A new duo—Voice Recognition featuring Gary Garrett & Anjalisa Aitke—are the featured act at the Shell Cafe Thursday, March 20 (6:30 p.m.; all ages; free), as part of a singer-songwriter showcase that will also include Sacramento-based band Musical Charis. “Gary Garrett is well known to Central Coast audiences,” said concert co-producer Bonnie Nelson-Key. “His clever, thoughtful lyrics, memorable melodies, and improvised mouth trumpet have graced many of our showcases, and several features. Anjalisa Aitken is a lifelong singer and actress, songwriter and harmony geek from the Big Island of Hawaii. Gary and Anjalisa met when he was performing solo, and he heard a harmony vocal from someone in the audience. Within an hour or two of singing together, they knew they were going to form a duo. They just finished a series of shows in Hawaii.”

Sol Seed returns to Frog and Peach Friday, March 21 (9 p.m.; 21-and-older; $5). The Oregon-based reggae fusion band blends an eclectic mixture of musical influences from each of the five band members including funk, Latin, rock, and hip-hop. The socially conscious band has been named “Best Band of Eugene” for two years running and was recently fan-selected to open the 2014 Reggae in the Hills festival in California.

Amber Cross is giving you a gift on her birthday on Saturday, March 22, when she headlines Wild Horse Winery in Templeton (1 p.m.; all ages; free) during a singer-songwriter showcase. Cross performs weekly with The Old Time Fiddle & Banjo Show, but last year she released an excellent solo album of old time music called You Can Come In. She may have grown up surrounded by gospel music in a small town church in Maine where her father still preaches and her mother plays piano, but Cross’s voice sounds like it’s come down from the hills of Appalachia. She names Hazel Dickens, Iris Dement, Rose Maddox, Tom Waits, Greg Brown, and The Carter Family as inspiration. Special guests include Amber’s husband James Moore playing a duo set with fiddler Gary Arcemont; and Sami Grisafe, who is not only a singer-songwriter but a star athlete in women’s football. Curve Magazine wrote that she has “a voice like Melissa Etheridge and an arm like Joe Montana.”

It’s time for Three O’Clock Rock at The Fuel Dock with The Cliffnotes, a six-piece boogie blues, R&B, and classic rock band that created quite a stir in Morro Bay when they debuted at the Fuel Dock in 2013. According to Cliff “Crawdaddy” Stepp, “A standing room only crowd insisted on an encore after our first set!” By popular demand, they’re returning to do it again, Saturday, March 22, from 3 to 6 p.m. “Our unique blend of swampy blues, neo-psychedelia, and funky dance rhythms had people madly texting friends to join them for the party going on during Morro Bay’s Farmers Market,” added Stepp, a singer-songwriter from Arroyo Grande who’s had songs recorded by Pure Prairie League and blues tunes produced by B.B. King, among others. On vocals and washboard is the world-renowned Valerie Johnson, who “filled in” for Janis Joplin when she toured with Big Brother & The Holding Company. Val’s husband Al B Blue is the lead and wicked slide guitar player whose former bands used to open for the likes of Curtis Mayfield and Hugh Masekala. Rounding out the ensemble is a harp player who has performed with a long list of blues legends throughout the U.S., Joey Five & Dimes; plus accomplished jazz-rock bassist Doctor Stan, and the Bassman and the Zen master of percussion Daniel “Grasshopper” Ruben. They’re a super group!

Here comes the judge! Former Superior Court judge Mike Cummins, a life-long SLO resident, has traded in his gavel for a guitar and has begun his long delayed quest to sing and entertain with a new act comprised of great local musicians called Judge Mike & The Lawless: bandleader Glen Rathbone (guitar/vocals), Wally Barnick (bass/guitar/vocals), Art Dougall (drums), Alex Kizanis (keyboards/vocals), Bob Hamilton (pedal steel), Julie Beaver (fiddle/vocals), Corrine Manroe (guitar/bass/vocals), and Jonas Richardson (mandolin/harmonica/jug). Local legend Lowell McDonnell will make a special guest appearance when they play the Clark Center Saturday, March 22, at 7 p.m. (call 489-9444 for tickets—17.50-$27.50). Expect to hear songs by Johnny Cash, Bob Wills, Merle Haggard, Willie Nelson, Kris Kristofferson, Hank Williams, Gene Autry, Patsy Cline, George Jones, Buck Owens, George Strait, and Judge Mike originals. “These songs move me now—musically and poetically—as much as they did when I first heard them … and I know I’m not alone. The songs that we’ve collected for this show represent classic country on steroids, and nobody involved with the performance seems to have ever been involved with anything quite like it. We’re all really excited about this show.” 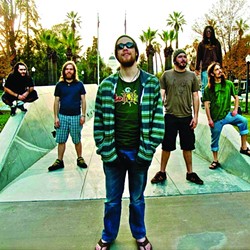 Mimi Blais, Queen of Ragtime Piano, plays a house concert Saturday, March 22, at 7 p.m. in Los Osos (call 528-6557 or email sstern3126@aol.com for $20 tickets and directions). Larisa Migachyov will open the evening. Blais was trained in classical piano in Canada and has performed all over the USA and Europe. She has been called the new “Victor Borge” of modern musicians. Migachyov is both a fine pianist and excellent composer of new ragtime pieces.

Sugar in the Gourd appears at the next Música Del Río House Concert Saturday, March 22, at 7:30 p.m. in Atascadero (call 466-6941 for $20 tickets, reservations, and directions). Named after a traditional foot-stomping fiddle tune, Sugar in the Gourd is a ton of fun. “These four talented women have the added depth of beautifully constructed original songs covering topics from trains, drinking, love, and redemption; all the way to a conversation with God,” said concert organizer Fred Munroe. “Merrily, Aubrey, Lisa, and Lynn comprise this delightful Americana-roots quartet joining us for the first time at Música Del Río. We heard these women in showcase at FAR-West and were captivated by their range of Americana. From old blues to original swing tunes; with an Appalachian murder ballad thrown in, Sugar will make sure we have a tasty musical sampling from the old, to the new; with the irreverent mixed in for good measure. Their beautiful three part vocal harmonies along with fine musicianship on violin, guitar, mandolin, upright bass, and banjo make them a refreshing musical treat.”

Singer-songwriter Ellis Paul plays Big Sur’s Henry Miller Library Sunday, March 23, at 7 p.m. ($22 tickets available online at eventbrite.com; $25 at the door), offering a preview of his new record and songs from his 20-plus-year thriving career that was launched out of the Boston open mic scene. He just finished recording his next studio album in Atlanta, Charlottesville, and Boston, to be released this month. Kristian Bush, half of the Grammy-award winning Sugarland duo, produced the project. For the second time, the release is completely funded by fans—Paul raised more than $100,000, with more than 600 donors, all from his email list. The constantly touring veteran troubadour might be best known for his song “World Ain’t Slowin’ Down,” which was the title track to Jim Carrey’s film, Me, Myself and Irene. His songs have also appeared in Hall Pass and Shallow Hall, both directed by his big fans The Farrelly Brothers. This is a great entertainer!