Maybe it’s the striking, steam punk look of all the bells and whistles, like an old train chugging through wilderness. Maybe it’s the storied history of booze-making in America, peppered with bootleggers and gun-slinging drifters. It could be the other-worldly patina, which glows like a newly minted penny. Whatever it is, Lola and Steve Glossner have come to find that a simple copper still has a way of stirring the soul and igniting the imagination.

“It takes you back to a different era, to those old time movies,” Lola said. “For many customers, it’s something they’ve never seen.”

Once visitors enter the couple’s barn-like tasting room, the conversation inevitably centers on Miss Ethyl, a 500-liter German still. The Glossners use her to fortify their famous Paso Port, and more recently, to distill sister offering Pendray’s spirits. Engineers and gear-heads are quick to investigate how the machinery works. Everyone wants an Instagram picture taken in front of it.

“These are often wine consumers for many years, so a stainless steel tank doesn’t quite register the same,” Lola added. “A copper still? It’s very intriguing.”

The Glossner’s bucolic Templeton property off Booker Road is surrounded on all sides by ripening vineyards, but visitors aren’t simply vying for a taste of wine—although they’ve got it in spades (the Glossners also offer their label Per Cazo Cellars wines). These days, a new taste is lingering on tourists’ lips. The world has cracked open and spirits started trickling out, and that stream is just now beginning to gush. Grappa. Nocino.  Brandy. Fruit-based liqueurs. Pendray’s got ‘em all, and you can try six of whatever you fancy in a single visit. The couple was hot on this new boom, purchasing their still in 2013. 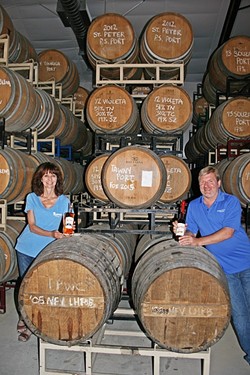 “We were the second distillery in Paso Robles, after the Villicanas at Re:Find Distillery,” Lola said. “One day we just got together and said, ‘We’ve got to do something to bring all of these incredible Paso Robles distilleries together.’”

The result was, of course, the Paso Robles Distillery Trail, which features eight producers crafting everything from smooth vodka and rye whiskey to herbaceous gin and hibiscus flavored brandy. With Lola on business duty and Steve working the creative end, Pendray’s is making a name for itself across the region. Their success partly lies in their strong relationship.

I mean, not many couples can boast an origin story so perfect. The premise is straight from a romantic comedy. Their relationship began amazingly with “love at first sip.”

A bit of backstory: Before meeting, the two led very different lives: Lola worked in the corporate aerospace sphere in Southern California while Steven made a hard left turn from a pre-med focus in his home state of Pennsylvania to chase a love affair with oenology in sunny California. In 1994, he began living out his winemaking dreams at Justin Winery in Paso Robles.

“It turned out to be Justin’s Isosceles; Steve had made it,” Lola said with a laugh. She eventually became intoxicated with the winemaking world, making her new home in Paso. She eventually asked Steve if he’d take her on as a harvest hand. You can guess what happened next.

The lovebirds married in 2009, and while Steve has continued to lend his winemaking talents to now iconic wineries like Adelaida Cellars and Halter Ranch, the couple also started their own project: Paso Port. Each emblazoned with a different pinup girl image, the bottles stand out from the crowd with bold design and equally enticing dessert-worthy flavor. For years, the couple purchased alcohol to fortify their precious port, winner of more gold medals than I can mention here. Then, in 2013, an exciting realization came: It would actually cost the same amount to distill it themselves. Plus, it could be fun. 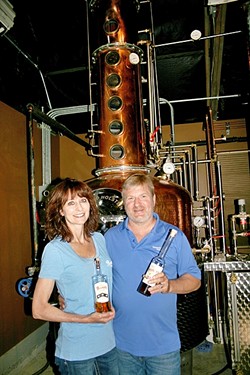 That initial inspiration dovetailed nicely into Pendray’s Distillery, which produced its first offering, a viognier brandy, last year. “Pendray’s,” an homage to Lola’s Cornish maiden name and ancestry, offers up a creative release for Steve, who has spent about two decades tinkering with fine wine and port.

“He’s very passionate about winemaking, and it shows in the product he puts out. The port allowed him to step outside of the winemaking box and allowed him to do what he wanted to do. The distillery side is an extension of that,” Lola said. “He’s a scientist, chemist, and artist.”

Recent creations include a golden-hued port-barrel-aged-viognier brandy, a sweet, spicy zinfandel grappa, and a liqueur infused with plums straight from the Glossner’s own tree.

“We’re seeing the revolution of mixology and the people that are driving it are excited about mixing with these spirits,” Steve said. “We put out recipes on our social media and if a local restaurant is offering a special drink with our spirits, we’ll share that recipe with our friends in the tasting room. It’s all part of this intimate program we’ve created.”

The couple produces batches of about 1,000 bottles at a time—not much, by industry standards, but quite a lot of work for a team of two.

“When the fruit comes in, it’s a lot like harvest. There’s very little time to process it: 24 to 48 hours,” Steve said. “With wine, it’s more free form because every vintage is different. Spirit programs tend to be more recipe based, because you want your customer to be able to come in and buy a particular bottle that’s consistent.”

The Glossners are still toiling hard to create these recipes (and yes, there’s a lot of math involved). Questions are always begging to be answered. How many pounds of walnuts get steeped in how many gallons of neutral brandy for balanced nocino? How many cloves and cinnamon sticks are needed to make a particular recipe pop? Does this batch need a touch of citrus? Lemon peel? Orange zest?

“It’s a day by day program, tweaking it all the time,” Lola said. Added her husband, “After 20 years of winemaking, I am pretty at ease as to what the future of a wine is going to be. Spirits are a much more nebulous thing. It’s still an education for us.”

Right now, it takes about four to six-months to create a new liqueur, and there’s always a new recipe to test or ingredient to try. When I asked the Glossners if they were good sticking with their three offerings, their “trifecta” of spirits, wine, and port, they just laughed.

“Three is more than enough for now,” Steve said.