Trip to the oasis: Oso Flaco Lake is a freshwater paradise full of human footprints

Fog hangs low, just above the short treetops of arroyo willows and wax myrtles with limbs that roof a short dirt road. Bears, mountain lions, and fish infested with the pesticide from local agricultural fields are noted along the trail as things to not run into.

A steady stream of water interrupts the creaking of tree limbs, flowing beneath the path from one side to the other as my feet hit the boardwalk that crosses the lake. White pelicans roam in packs, lifting off the water with a gentle whoosh, moving from one spot to the next. The ocean’s salty smell comes in waves that rustle the reeds, and a sudden ebb of sound gives way to chirps, honks, and whirs of chatter from cormorants, mallards, and other birds I can’t name.

This place is unique: A freshwater lake in the middle of undulating, constantly changing hills made of sand and vegetation. The Oso Flaco Lake Natural Area is part of the Oceano Dunes Off-Highway Vehicle Recreation Area, and while it’s not the only oasis in the dunes, it is the easiest to access.

The boardwalk thuds across the water and onto the dunes, where it stretches and buckles with the dips in the sand, continuing its hollow echo for a mile, almost all the way to the beach. 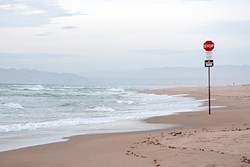 Trash hangs onto the wire fencing that wraps around protected habitat that California State Parks is trying to invigorate. The fencing starts where the sand becomes unsaturated with silver lupine, coyote bush, and deer sage. Signs are zip-tied every couple of steps to warn walkers about the endangered snowy plover, the least tern, and plants that need a reprieve from human traffic.

Ropes welcome visitors to the beige carpet of sand that opens onto the beach at the end of Oso Flaco Lake’s boardwalk trail. Miles of beach head in either direction.

A huge red stop sign obscures the view of Port San Luis, Avila, and Pismo Beach to the north. It’s odd, considering vehicle traffic is nowhere in sight. The area was closed off to beach traffic from the Oceano Dunes in 2005, due to a vehicle that killed a snowy plover. The plovers are an endangered species that nests in the area from March to October. Areas weren’t roped off until the Sierra Club sued State Parks, after the vehicle-ran-over-a-plover accident.

Tar—sticky, malleable, and stinky—sticks out black and big against the tiny grains of pale sand. The black chunks could be remnants of natural seepage from the ocean floor, but they could also be remnants of a time when oil drillers and refineries could do what they wanted to the landscape without fear of reprisal. Unocal started operating the Guadalupe oil fields in the 1950s and leaked 18 million gallons of petroleum from busted pipelines under the dunes for the next 40 years. The company was fined $44 million and forced to clean up the 2,700-acre site in 1994.

Walking through Oso Flaco is like participating in a living museum, a beautiful ode to history shaped by humanity.