For more information on tours and other
events hosted by Disneyana, visit disneyanafanclub.org.

It's Sunday, Jan. 14, and a few friends of mine and I are on our way to Beverly Hills for the day. "Is this guy serial?" I said as a yellow Mini Cooper behind us hopped over to the opposite lane. The driver sped up ferociously in an attempt to pass my friend's Prius even though there was clearly a semi coming around the bend.

We started driving just before sunrise that day, which was a gamble since our engagement started at 9 a.m. and we had to take the 166 to get to the 5 (this was about a week before the 101 reopened following the Montecito mudslides).

The event? The 2018 Walking with Giants Tour hosted by Disneyana, a nonprofit dedicated to Disney fandom that holds expos, conventions, and other events for Disney enthusiasts year-round. This particular tour celebrates the Sherman brothers, the songwriting duo famous for composing the scores for Mary Poppins, The Jungle Book, The Many Adventures of Winnie the Pooh, The Aristocats, and other Disney films.

But before I get to the tour, let me resolve that cliffhanger I left you on with the Mini Cooper. The guy made it, and we were right behind him for more than an hour after that so I'm sure it all felt worthwhile. Repressed road rage aside, taking an alternative route to the 101 was actually kind of a fun change of scenery. Plus, it turns out that Bakersfield has like five different Sonic locations.

I really didn't have faith in us getting to Beverly Hills by 9, which didn't bother me too much (our backup plan was to just keep driving to Anaheim and go to Disneyland instead!). But somehow we made it the historic Beverly Hills Hotel, the tour's departure point, in the nick of time.

After parking and jumping aboard the trolley bus with the rest of the group, we were introduced to our tour guide, Robbie Sherman, son of Robert. Hearing Robbie talk about his father and uncle, Richard, was quite a treat. I've never been on a tour hosted by someone so close to the subject matter (this would be the equivalent of a Hearst Castle tour led by one of William Randolph Hearst's children).

Most of the tour consisted of residential areas where we saw a few houses that one of or both of the Sherman brothers once resided at, including their childhood home and the estate Robert and his family lived on during the production of Mary Poppins (where Robbie grew up). Although the Sherman family no longer owns the home, a plaque outside the front entrance reads "Casa Poppins." We also stopped at Beverly Hills High School, which both of the brothers and Robbie graduated from. 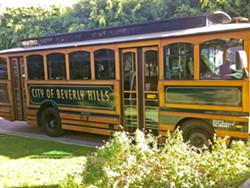 Robbie told many stories about his father and uncle, but my favorite tidbit of the tour was his aside about witnessing acclaimed children's author Roald Dahl (Charlie and the Chocolate Factory) pee in his father's swimming pool after getting drunk one evening during the production of Chitty Chitty Bang Bang (which Dahl and the Sherman brothers collaborated on).

After the tour, we snagged a quick photo with Robbie at the hotel. The drive back home wasn't as excruciating as the drive there, since the time sensitivity aspect was gone (and we never saw that Mini Cooper again). And yes, we stopped at a Sonic in Bakersfield for dinner. I got popcorn chicken, or should I say, Mary Popcorn chicken. Δ

Calendar Editor Caleb Wiseblood wishes SLO had a Sonic. Contact him at cwiseblood@newtimesslo.com.