Trouble intersections will get a closer watch 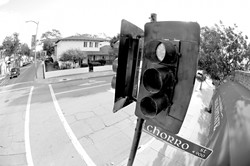 A recent grant awarded to the department prompted the move, set to run through Sept. 30, 2008. At the outset, the department will begin a selective enforcement program to reduce collisions and DUIs throughout the city.

Over two years, officers will conduct about 50 special operations targeting red light violations at or near intersections where a disproportionate number of traffic collisions occur.