Eric Taylor’s got grit and heart and soul dripping out of every song he sings—melancholy narrative tales richly rendered by his spare guitar and rustic voice. He sounds like he’s from Nashville or Austin or some other literate singer-songwriter’s Mecca (Houston, anyone?). If you’re a fan of Bruce Cockburn, Taylor’s right up your alley. This week choose between three concerts by Eric Taylor, who’s touring in support of Hollywood Pocketknife, a collection of potent, stick-to-your-ribs country-flavored folk songs. SLO Folks has him playing Friday, May 9 at Coalesce Bookstore in Morro Bay (7 p.m.; $15; 772-2880) and Saturday, May 10 at the SLO Arts Center (7 p.m.; $16.50 advance at Boo Boo’s; $18 at the door). You can also see him on Sunday, May 11 at the Henry Miller Library in Big Sur (3 p.m.; $15, 831-667-2574, or online at www.henrymiller.org).

Earle, one of the greatest living songwriters, said, “Eric Taylor was one of my heroes and teachers when I started playing around Houston in the early 1970s. He’s the real deal.”

High praise from a guy who’s the real deal himself! Sonnie Brown will interview Taylor on KCBX 90.1FM on the “Minstrel Song Show” on Saturday, May 10, between 2 and 4 p.m. 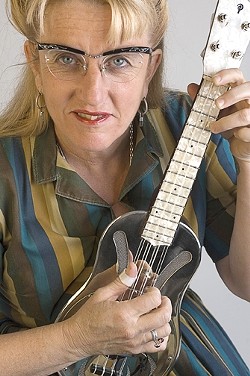 Del Rey is something of a renaissance woman.

She combines country blues, stride piano, classic jazz, and hillbilly boogie channeled through “the sensibility of an autodidact trailer park esthete.” She also regularly presents a concert/lecture on women musicians called Women in American Music, collaborates and tours frequently with Austin guitarist Steve James, and plays ukulele with Ukeshack. Since 2004, she’s been collaborating with Maria Muldaur on tributes to Sister Rosetta Tharpe and Johnny Cash, and she is featured on Muldaur’s “Sweet Lovin’ Old Soul.” And to top it off she also writes about music for various publications, including Acoustic Guitar.

Road songs
Mix a little country blues with a little roadhouse folk and a background of too many years following Bonnie Raitt and the Grateful Dead around and you’ve got the recipe for Rachel Sedacca, Americana singer-songwriter extraordinaire.

Sedacca specializes in road songs of travel and the places she’s seen, and why not? She covered 5,600 miles of American roads one spring in her converted 1971 GMC school bus “Patience.”

“We’ve never hosted a CD release party at M·sica Del RÌo before,” said Munroe. “We heard Rachel was releasing her second CD Patience Pays this spring and the wheels just started rolling. When we’ve listened to Rachel at Linnaea’s Cafe or Last Stage West with her many friends wedged in by shoehorn, we got an idea–‘Rachel, we have a free Saturday in May, let’s have a party.’

“Because it’s a release party, everyone gets a CD as a thank you for supporting Rachel and live acoustic music with their $20 donation.†Patience Pays is just out this month. Her debut Lucky Like Me is also well worth your attention and everyone gets to choose which CD they want to take home. Bring a friend or your partner and that way you can take home one of each.”

Sedacca will be joined by Mark Parson on the fiddle and guitar, and Danny Wilson on the mandolin and acoustic bass. Call 466-6941 for reservations, or go online at www.musicadelrio.org.

Sing Frybrid!
Ian McFeron, a prolific songwriter who’s drawn comparisons to Bob Dylan and Ryan Adams, returns to SLO Town for a Tuesday, May 13, 10:30 p.m. gig at Frog and Peach. His CDs include Don’t Look Back (2003), A Long Way To Freedom (2005), Fistfight With Father Time (2006), and most recently Let It Ride (2007). McFeron (vocals, guitar, piano) will be joined by the Texas fiddler Alisa Milner, bassist Jon Markel, and drummer Mark Bateman.

Like so many hard-touring bands these days, McFeron and company are working hard to be as ecologically-conscious as possible, hiring Frybrid, a Seattle-based alternative fuel company, to outfit their diesel tour bus with a heated fuel tank, fuel lines, and fuel injectors that will allow it to run on straight vegetable oil. You can pick up literature on their fuel conversion plans and how fans can help them become carbon neutral this fall.

Big sky sounds
Internationally acclaimed cello and guitar duo Montana Skies, which was recently in the studio recording their four album, plays two shows this week: Wednesday, May 14 at 7:30 p.m. in SLO’s Steynberg Gallery ($10); and Thursday, May 15 at 7:30 p.m. at Cambria’s Painted Sky Recording Studio ($12). Tickets are available by calling call 546-2857 or visiting www.cambriahoot.com

Husband and wife team Jennifer and Jonathan Adams won the “Best New Artist 2004” at the Lifestyle Music Awards thanks to their stunning self-titled debut album. They met about a decade ago at the University of Georgia, where both were studying classical music.

“Throughout the years, we’ve developed many of our own arrangements ranging from world music and classical to original compositions. The fact that ‘ready made’ repertoire is not available for our combination of instruments is really what pushes us to be more creative with our music. We love composing and arranging, and appreciate the opportunity to present old favorites, along with newer music, to our audiences,” explained Jonathan.

De-MOCK-cracy in action!
Political humorist P.J. O’Rourke famously once said, “The Capitol Steps are what Washington would be like if everyone were smarter and could sing.” 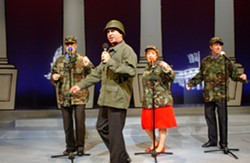 He’s right. I saw The Capitol Steps a few years back, and they’re hilarious lampooners of Washington politics, all in the form of Broadway-style show tunes. Regardless of which side of the aisle you inhabit or whether you hail from a red state or blue, The Capitol Steps are guaranteed to deliver bi-partisan levity.

Roots rockabilly act The Hydramatics are exactly the kind of band you’d want to see at a drive-in burger joint. The quartet caters to the car culture crowd, see? And they’ll perform at JR’s Drive-In Burgers in Santa Maria this Friday, May 9 at 6 p.m. during a benefit cruise to help raise money for the American Cancer Society’s Relay For Life. Also, mark your calendars for when The Hydramatics open for Royal Crown Review on Saturday, May 17 at Downtown Brew.

Cambria resident James “Red” Holloway is certainly SLO County’s most famous jazz artist. He’s played with everyone from Dexter Gordon to Lionel Hampton, Jack McDuff to Billie Holiday, Ben Webster to Sonny Rollins, Lester Young to Sonny Stitt. See the saxophone king when he plays with the Mike Raynor Group on Friday, May 9 at the Inn at Morro Bay. The show starts at 7:30 p.m. and it’s free. For more details go to www.CityNightsJazz.com.

If you like your rock’n’roll dangerous, unrestrained, and filled with sexual innuendo, then wooooooeeeeeee does Sexytime Explosion have a show for you. The Turbo Negro tribute act will play Friday, May 9 at Downtown Brew along with Honor Bound Heroes, Eken is Dead, and Broadway Squad to celebrate local concert promoter Damien Montoya’s birthday. He’s 12 years old emotionally! He’s probably armed! And he’s definitely dangerous! Gotta be 21 for this one, kids. Doors open at 8 p.m.

A young twanged-out gal from Atlanta—Anna Kramer—will bring her rootsy, jangly, countrified sounds to Boo Boo Records for a 3 p.m. free in-store concert this Saturday, May 10. Kramer, a Criminal Records recording artist, is touring in support of her new 7” single “All Those Pretty Things,” and a full-length recording called The Rustic Contemporary Sounds of Anna Kramer & The Lost Cause.

“The Organ at the Opera” features operatic arias, duets, and trios accompanied by the Forbes Organ and piano on Saturday, May 10 at 8 p.m. in the Performing Arts Center. Pacific Repertory Opera members Chris Bengochea, Lori Stinson, Craig Colclough, and Deborah Bertling will perform. Call 756-2787 for tickets ($20, $30, or $40—1/2 off for students).

Zongo All-Stars, who got the Pozo crowd up and moving before the Twinkle Brothers played a couple of weeks ago, will bust out the CaliCubano jams at Sweet Springs Saloon this Saturday, May 10 about 9 p.m.

Lindsay Ann White plays Linnaea’s CafÈ this Mother’s Day, Sunday, May 11, at 7 p.m. She lists Bob Dylan, Amy Winehouse, Ani Difranco, Fiona Apple, Jewel, John Prine, Al Stewart, and Joni Mitchell as influences, but her song “Sweet the Sound” that I listened to on her myspace (www.myspace.com/lindsayannwhite) reminded me of the Moldy Peaches!

The Clubhouse hosts its regular Songwriters Showcase this Tuesday, May 13 from 6:30 to 9:30 p.m. This week Craig Louis Dingman is the featured performer, who will be joined by local songsmiths during this free, all-ages concert. Each showcase includes one featured act, who plays a 45-minute set in the middle of the three-hour show. Up to eight other guest performers play three-song sets. Dingman, an Atascadero resident, was a Best Song winner at the West Coast Songwriters Competition. He plays jazz chords on a hollow-body electric guitar, and sings “wry, literate ballads in the style of Mose Allison or Dave Frishberg.” †Guest performers will include a female duo called The Blue-Eyed Betties, and local songwriters Robbin West and Monica Jensen.

Various Artists—Soul Messages From Dimona
Numero Group, the Indiana Jones of the recording industry, has once again struck a unique vein of immeasurable wealth. In the mid-‘70s, a contingency of American-born Israeli Black Hebrews picked up their belongings and departed for Dimona, Israel, but not before packing all the sounds of their native Detroit and Chicago. Devotional without being heavy handed in religious piety, Soul Messages From Dimona is a collection of the spiritual sound arriving from their new colony, resembling such acts as Earth Wind and Fire, and the eastern influences developing within several threads of ‘70s jazz. With 10 tracks featuring the funky upbeat the Soul Messengers, who can alternate between sounding like the Curtis Mayfield-led Impressions ("Go To Proclaim") or the early Chicago-based soul jazz of The Pharaohs ("Equilibrium"), this will delight fans of Stax and Motown. The Tonistics "Holding On" resemble the dance harmonies of the Jackson Five, but the warm, soul charm of "Hey There" by the Sons Of The Kingdom is easily worth the price of admission. It’s an amazing collection.

The Roots—Rising Down
Hip-hop shares with jazz the nagging difficulty of having its most critically acclaimed artists rarely being its commercial success stories. The Roots deserve to be embittered. Fronted with the incendiary lyrics of Black Thought and backed with the master musicianship and charm of epic drummer Questlove, they’ve released albums destined to be classics, but largely ignored by commercial radio. With their latest, Rising Down, there is still, honorably, no attempt to go pop or to soften their aggressive live band sound. In fact, with lyrics dissecting global environmental catastrophe ("between the greenhouse gases/ and earth spinning off its axis"), suicide bombing ("willing to spill my blood to make changes"), and African boys turned armed militia ("his heart can’t get through the years of scar tissue"), Rising Down can seem darkly sinister, with music that is gritty and tough. This is not an easy album to digest, but a necessary one. But one listen to the Black Thought’s 1987 a cappella freestyle track "@15" and you’ll feel the honor was truly yours.

Glen Starkey has this sneaking suspicion that he‘s getting screwed while everyone else is getting laid. Reassure him he’s right at gstarkey@newtimesslo.com.