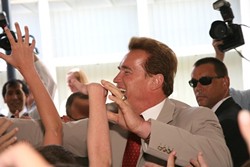 # Californiaâ€™s celebrity governor stepped out of a heavily escorted limousine and moseyed past a deafening welcome party amassed in the school courtyard. Guided by aides, Schwarzenegger followed a carefully laid photo-op trail through campus, greeting supporters along the way. While addressing a class of young bohemiansâ€”several visually confounded by the ruckusâ€”the governor made a few curious additions to a mosaic of California poppies.

After a few minutes, the procession trailed off to a classroom where bright-eyed honor student Ariana Shakibnia, along with school and district administrators, welcomed the honored guest.

â€œAll of us are extremely proud to have Gov. Schwarzenegger here and we really appreciate his demonstration of support to fine arts, music and physical education,â€? Sinsheimer principal Joyce Hunter said. â€œFor several years our school district and many others in the state incurred budget cuts that affected these programs.â€?

One moment. Is this not the same California governor who sent the California Teachers Association (CTA) into a snapping-and-clawing frenzy during the November special election season? Is this not the same bottom-line politician who, just seven months earlier, attempted to defer teacherâ€™s pensions, slash at the unionâ€™s political bankrolls, and repeal school spending guarantees?

At most, a score of anti-Arnold protestors lined up on the sidewalk down Augusta Street, brandishing signs in support of Democratic challenger Phil Angelides. By all other accounts, the affair proved a jovial visit for the incumbent; his embattled status notably diminished of late. Even with an education-oriented crowd in attendance, last fallâ€™s pariah seemed the summerâ€™s prodigal son.

â€œI think I never really had a problem with teachersâ€”that was a misunderstanding,â€? Schwarzenegger said, brushing off his previous run-in with the powerful CTA union. â€œItâ€™s really interesting that every year is different. Last year everyone was fighting, and this year everyone is getting along.â€?

Perhaps itâ€™s not quite that serendipitous. The lubricant in this transition: funding, and plenty of it.

The turnabout arrived with a campaign caravan to bolster education funding in the pending budget, now that the economy appears to be on the mend. Under Schwarzeneggerâ€™s proposed allocation, education programs would enjoy an unprecedented $55.1 billion in state funding. The governorâ€™s appearance at the local school, however, came with an aesthetic flair, as he proudly unveiled $416 million earmarked specifically for hiring and training fine arts teachers and another $250 million in block grants for one-time supply upgrades.

â€œFor the first year (since Iâ€™ve been governor) weâ€™ve seen great revenues, weâ€™ve seen business booming, and weâ€™re seeing the economy coming back,â€? Schwarzenegger said. â€œNow we can afford [the budget increase] and also pay off the debt in the State of California.â€?

In May alone, the California economy netted 14,800 additional payroll jobsâ€”almost a fifth of the gross national gainâ€”as traditional industries continue to writhe with rediscovered signs of life. And, with the real estate market leveling offâ€”a force accounting for 11 percent of the economic output in the dark days of 2005â€”this fiscal jolt came as timely news for the governor. One day in early May, Schwarzenegger discovered an unanticipated $7.5 billion in the state coffers and promptly offered the budget revision.

But not all teachers are willing to forgive and forget the disagreements of the past. In the halls of local K-12 and community college campuses, some educators, though pleased with the governorâ€™s change of policy, stayed skeptical of his promises. The principle concern, for most, remains whether Schwarzeneggerâ€™s education empathy will endure through election season and beyond.

â€œThe biggest problem is the uncertainty,â€? Ashbaugh said. â€œHeâ€™s certainly a political animal and we never know which Schwarzenegger is going to show up.â€?

Among a long list of teachersâ€™ gripes, ill will over funds withheld through a suspension of a Prop. 98 mechanism in 2004 remains a point of contention, along with Schwarzeneggerâ€™s track record of budget trimming.

Then, of course, thereâ€™s the usual bucket full of semantics. In regard to the $5 billion recently tagged for education above and beyond Prop. 98 requirements, Schwarzenegger proclaimed the move an affirmation of his education-friendly agenda. The unions, meanwhile, called it restitution.

â€œItâ€™s important to remember, this is a repayment of debt owed to schools,â€? CTA spokesman Mike Myslinski said of the settlement. â€œItâ€™s significant and it helps move us forward, but we should build on this.â€?

As a result of a lawsuit with CTA, settled by Schwarzenegger about the same time as the announcement of the budget revision, school districts will see $2 billion this year out of the $5 million in lost Prop. 98 funds, and the remainder over the next seven budget terms.

Several local school board members echoed the lobbyistâ€™s objection. SLCU Board President Patty Andreen argued that the needs of her district differ somewhat dramatically from the governorâ€™s sweeping allocations.

â€œWe already place a huge priority on arts and physical educationâ€”our focus is more on narrowing the achievement gap,â€? Andreen said, referring to plans to bolster special education and counseling programs like AVID. â€œToo much earmarking might end up not curing inequity but actually accentuating it.â€?

But not all local educators approached by New Times voiced concern over Schwarzeneggerâ€™s intentions. SLCU Superintendent Ed Valentine called the governorâ€™s budget encouraging and expressed confidence the move represents a definite change in policy, if not a change in heart.

â€œIf you picture a 180-degree swing one way and then another turnaround in Novemberâ€”I think that would hurt Schwarzenegger more than anyone,â€? Valentine speculated.

In past years, controversial budget cuts delayed the state legislatureâ€™s passing of the fiscal plan by several months. Once again this year, the oft-ridiculed June 15 deadline came and went with no new budget. The snare this timeâ€”Republican dissent over a program offering state-funded healthcare to illegal residents. âˆ†