For whatever reason, there’s something weirdly binding about the shared experience of being raised by the same loving, possibly deranged people, looking kind of sort of alike, and being able to roll your eyes together at the latest batch of dad’s jokes.

Siblings: They’re supposed to be built-in BFFs from day one (Isn’t that why Mom and Dad made such a big to-do about spacing the kids no more than two years apart?), but like any other bond, those ties can be severed. American playwright Sam Shepard pokes and pulls at the limitations of this seemingly intrinsic bond in his play True West, directed by Mark Sitko and currently showing at the San Luis Obispo Little Theatre.

Let’s go back to 1981, generally outside of Los Angeles where it’s hotter than hell, specifically in one family’s kitchen/living room with its practical linoleum, dozens of houseplants, and an assortment of knickknacks and antiques.

Austin (Marcus DiMaggio), the family’s responsible youngest son, is house-sitting while Mom (Sue Miers) is away on vacation in Alaska, using this quiet time away from his own family in Northern California to plug away on his latest screenplay. His work time is unceremoniously interrupted when his estranged older brother, the rebel-without-a-cause Lee (Mike Fiore, who previously starred in Cabaret as American novelist Cliff Bradshaw), stops by and decides to crash. The two haven’t seen each other in five years, and it shows. DiMaggio and Fiore create an on-stage tension so tangible that you could cut it with a knife. This is not the pleasant kind of play that you see to escape the harsh realities of life. This is the kind of play that makes you consider how messed up your own family is or isn’t.

Austin and Lee are your typical complete-opposite-of-each-other sibling set. Austin went to an Ivy League college and now works as a screenwriter in the movie biz, while Lee took off adventuring, living for a spell in the desert, and spent time fighting his pit bull and stealing televisions from suburban homes to get by. Austin moved 500 miles away to get distance from his family; from his alcoholic dad who won’t get better; from his brother Lee, who clearly scares the crap out of him (“What kinda people kill each other most? Family people. Brothers,” Lee speculates one night.); and even from his mom, who is slowly losing her mind. 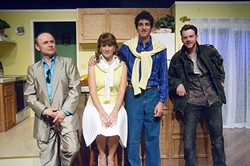 But from the second Lee sets foot inside the house, he surely but slowly begins intruding on Austin’s life. First he wants to borrow the car, then he casually suggests a story idea for Austin’s next screenplay before he meets with a big Hollywood producer: “If that, uh, story of yours doesn’t go over with the guy, tell him I got a couple a projects he might be interested in. Real commercial. Full a suspense. True-to-life stuff.”

And then the final blow: Suddenly Austin’s producer, Saul Kimmer (Tony Taylor), is backing Lee’s idea for a modern Western, while totally dropping Austin’s love story screenplay. Aside from the whole betrayal thing, there is one teeny, tiny problem: Lee can’t write, at all. And so the Freaky Friday-esque personality switcheroo begins with Austin refusing to help write Lee’s screenplay, choosing instead to drink his way through his mom’s champagne and hard liquor while taking up a life of toaster thievery. Meanwhile Lee takes up at his brother’s typewriter as he painstakingly tries to focus on writing amid Austin’s drunken shenanigans, occasionally begging his brother for writing help. Lee’s writer’s block hits an all-time low when he takes a golf club to the typewriter, again and again.

“He thinks we’re the same person!” Austin exclaims in frustration at one point, referring to Saul. And the nail is hit on the head. While Saul knows that Austin and Lee aren’t the same person, he does assume that because they’re siblings with a shared experience that their talents and creative abilities are one and the same. Oh, brother.

Ryah Cooley is feeling OK about being an only child after seeing 'True West' at rcooley@newtimesslo.com.