Truffle shuffle: Could local truffles be the next fungus among us?

It’s hard to think of truffles without conjuring images of pigs snorting across dark European forests leading someone on a hunt through the woods in search of a potato-sized lump of culinary gold—there’s probably also a beret somewhere in this particular fantasy.

In a few years, however, and with a little bit of luck, Terry Speizer could be harvesting his own crop of locally grown truffles hinted with flavors from the unique soils of the Edna Valley region south of San Luis Obispo.

Worst-case scenario, as Speizer figures, he’ll end up with 2 1/2 acres of oak trees, with 205 trees per acre. Asked if he thinks his farm can provide the appropriate microclimate that will spur the notoriously finicky fungi to grow, Speizer responded, “I’m sure I don’t.

“I’m trying to create it, but in the worst case I’ve got a great oak forest. I don’t know how many people you know who have their own oak forest.”

Truffles grow in the roots of trees and are referred to as mycorrhizal (derived from the Greek mykós, meaning fungus, and riza for roots) and form a symbiotic relationship with the tree. It can take anywhere from five to nine years for the truffles to fully form.

If it seems odd that a California farmer is trying to grow truffles, a crop most often gathered rather than cultivated, it is. While it’s possible to forage for natural truffles in SLO County, the types of truffles turned up in a place like Cambria are not typically edible, said David Krause, one of the leaders of the annual Fungal Foray in Cambria.

Neither members of the SLO County Farm Bureau nor Dennis Sheridan, a local photographer and mycologist, could point to any known local commercial truffle operations. Sheridan said truffles are rare enough that local mushroom hunters don’t bother looking for them.

In fact, local fungal foragers who spoke with New Times said they try to avoid scrounging for truffles because without a specially trained dog (pigs are also used, but tend to eat the truffles), finding truffles involves raking the ground near tree roots and leaving a heavier impact than most would prefer.

However, commercially grown truffles are a burgeoning industry, and one with the potential for a big payoff.

While the price of truffles can vary throughout the year, the going rate tends to hover between $800 and $1,000 per pound. To put it in perspective, truffles provide the highest yield of almost any crop that doesn’t also get people high. 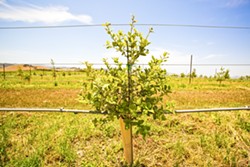 Locally, a meal with truffles can range anywhere from about $30 to $40 for a no-frills black truffle dish, to as much as $100 for a plate of white truffle fettuccini. Billionaire Stanley Ho, for example, paid $330,0000 for 2.87 pounds of white truffles at an auction fundraiser in 2010, according to Bloomberg.

The abnormally high financial yield of truffles, as compared to other crops, was one of the reasons Speizer decided to try and grow his own. Besides, he said, “I love truffles.”

For those who have never sampled a truffle (this writer included), the obvious question is whether they’re worth the culinary fervor they seem to attract? According to Bob Cummings, a fungal expert who teaches botany at Santa Barbara City College, the answer is a resounding yes.

But asked about growing truffles, Cummings said California typically doesn’t have cool enough temperatures, although he said some microclimates could provide the right conditions.

“You really kind of have to do some homework if you’re going to do this,” he said.

There are roughly 100 species of truffles, Cummings added, about 20 or 30 of which might be considered edible, but are “mediocre at best;” and only eight or nine species are worthy of being placed in a dish.

Sherman Walton, general manager of La Cosecha Bar + Restaurant and Il Cortile in Paso Robles, said the restaurant imports all of its truffles from Italy. The dishes vary depending on the season, with the real heavy hitters hitting palates when the winter shipments of white truffles arrive. He said the scent of white truffle dishes fills the restaurant before the plate even leaves the kitchen.

“It’s a unique flavor. I wouldn’t even know where to begin to describe it if you haven’t had one,” he said, calling truffles very “earthy.” “There’s nothing else that tastes like truffle.”

But there are ways to fake it. If you’ve ever had truffle oil, for instance, you probably haven’t actually had truffle oil. Many truffle oils use a synthetic combination of off-the-shelf chemicals to replicate the scent, which is infused into any garden-variety bottle of olive oil. Cummings, for example, gets his truffle oil for about $35 a bottle from the San Francisco Ferry Building.

The origin of successful commercial truffle growing is generally credited to Garland Truffles out of North Carolina. Unlike other mushroom cultivation, truffles can’t simply be spread as spores, but instead are sold as inoculated trees. In a few years, Speizer’s truffle operation will look no different than an intricately aligned oak forest. He planted English oaks inoculated with black truffle spores and holly oaks for his white truffles.

However, Speizer purchased his trees from Oregon, where truffle cultivation has taken seed on the West Coast. When he was discussing his plans, Speizer said Dr. Charles Lefevre of New World Truffieres in Eugene, Ore, told him it would be a big challenge.

Speizer gestured toward a pile of chalky off-white powder near where his white truffle oaks were just beginning to peak over their protective plastic tubing. The powder was a fresh shipment of lime, used to keep up the pH levels. Truffles favor high pH soils and areas with dry summers, according to New World Truffieres website.

Though Speizer seems cautiously optimistic about his chances of harvesting truffles, acknowledging that his Edna farm might not provide the right conditions to spur a successful yield, he appears lighthearted about it all, treating his grow like a fun experiment and just another crop to accompany his olive trees and grape vines. But if he’s successful, he could be the only source of locally grown truffles.

Senior Staff Writer Colin Rigley is generally considered a spore loser and not a fun guy. He can be reached at crigley@newtimesslo.com.