Dozens of Americans were killed in a string of unrelated mass shootings at the end of July and beginning of August, and support is building among Republican legislators for federal gun control measures like those outlined in a bill authored by Congressman Salud Carbajal (D-Santa Barbara). 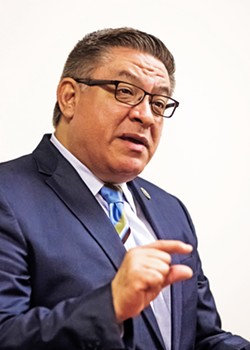 In a televised address on Aug. 5 regarding back-to-back-to-back mass shootings in California, Texas, and Ohio, President Donald Trump announced his support for "red flag laws" that would make it easier for law enforcement officials to temporarily take firearms from individuals who pose a threat to themselves or others.

"We must make sure that those judged to pose a grave risk to public safety do not have access to firearms, and that if they do, those firearms can be taken through rapid due process," Trump said in his address. "That is why I have called for red flag laws, also known as extreme risk protection orders."

The Extreme Risk Protection Order Act of 2019, House Resolution 1236, was reintroduced by Congressman Carbajal in February, and would set up a grant program to incentivize state, tribal, and local governments to adopt laws aimed at reducing gun deaths and injuries.

"You don't just want these laws enacted," Carbajal told New Times. "You want as many law enforcement officers and community members to understand what they are and how they're implemented. Training and awareness. That's part of what my bill would do."

Advocates consider extreme risk laws a critical tool in gun violence prevention, as so often after mass shootings, it's revealed that family members and law enforcement in the shooter's community saw dangerous and concerning behavior from the individual before the shooting occurred. Often, the ability to intervene in these circumstances is limited, but extreme risk laws enable that intervention, Carbajal said.

Some states already have extreme risk laws in place. After the Isla Vista shooting in May 2014, California passed a law allowing law enforcement and family members to get court-ordered "gun violence restraining orders" prohibiting dangerous individuals from possessing firearms. That went into effect in January 2016, and since then, most counties in the state have rarely granted gun violence restraining orders.

The Extreme Risk Protection Order Act has more than 130 co-sponsors in the House, and Carbajal said it's likely to move forward soon.