by Karen Garcia and Peter Johnson

This spring, the Carrizo Plain National Monument’s super bloom is drawing visitors from near and far, but now it’s under review by a Trump administration looking to limit its boundary lines or revoke its protection altogether.

President Donald Trump signed an executive order on April 26 directing U.S. Secretary of Interior Ryan Zinke to revisit the status of at least two dozen national monuments—including the Carrizo Plain—designated by previous presidents under the Antiquities Act of 1906.

The order instructs Zinke to review all national monuments that were designated after 1996 that encompass more than 100,000 acres. Monuments in California that fall under that category are the Carrizo Plain, Berryessa Snow Mountain, Cascade-Siskiyou, Giant Sequoia, Mojave Trails, San Gabriel Mountains, and Sand to Snow. 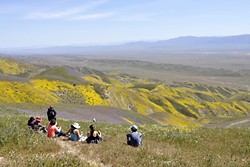 “Today @POTUS fulfilled a promise to give rural America a voice by reviewing monuments that don’t have local support,” Zinke wrote in a tweet on April 26.

The Carrizo Plain was designated as a national monument in 2001 by the Clinton administration, explained Jeff Kuyper, executive director of the Los Padres ForestWatch, a local nonprofit group.

“That put Carrizo on the map,” Kuyper said, “and protected the area from development, oil drilling, and fracking.”

Kuyper opposes the executive order and said that while a president has the authority to designate protected spaces, the Antiquities Act doesn’t have language that says the president can take that designation away.

“We’ll be watching the process very closely, that the boundaries of Carrizo Plains are not modified and not reduced,” Kuyper said. “We’ll be ready to hold this administration accountable in court. But before that point, we hope to demonstrate how much our community values the Carrizo national monument.”

Carrizo isn’t the only area of the Central Coast newly under review by the federal government.

According to national news reports, President Trump is set to issue a directive to the Department of the Interior to begin a review of possible locations for new oil and gas drilling leases off the coast of California. Trump is expected to sign the directive on April 28.

The review will be comprehensive, according to news reports, and will include the Pacific, Atlantic, and Arctic Ocean shores—areas that were declared off-limits to new drilling leases by former President Barack Obama.

“I am deeply troubled by reports that the administration is considering opening up California’s coast to further offshore oil drilling,” Carbajal said in a press release sent out April 26. “The Central Coast knows too well the economic and environmental havoc wreaked by oil and gas platforms off our coast. … Our local economies and fragile ocean ecosystems cannot afford another disastrous oil spill.”

Carbajal, a freshman congressman, recently introduced the California Clean Coast Act as his first piece of legislation. It would permanently ban issuing new oil and gas leases off the California coast. The bill is currently in a House subcommittee. The last oil drilling lease sold off California’s coast was in 1984.