It was 10 p.m. on election night, and the parking lot of The Graduate restaurant and bar was foggy, dark, and nearly empty.

Inside, a small group of people sat at tables tapping on their phones or staring blankly at the large screens as the results of the presidential election continued to come in. By that time the map was very, very red.

“I’m actually in a state of disbelief,” said Pat Harris, an executive committee member with the SLO County Democratic Party. 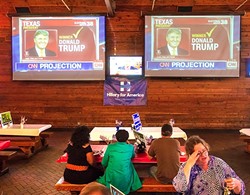 The Graduate was the site the group picked for its election night party to celebrate the victories of local candidates and of the party’s presidential nominee, Hillary Clinton. But Clinton, who was considered the favorite by pollsters, was already losing key battleground states to her Republican challenger, Donald Trump. It was the beginning of a stunning upset that left political scientists, pundits, and even the Clinton campaign, reeling.

“The mood was subdued. Sad. Wondering where the country was going to go from here,” Harris said as the restaurant cleared out.

Watching Trump close in on 270 electoral votes left a bad taste in the mouths of the democrats attending the party, including local candidates winning their own elections. That night, Bob Vessely was on his way to winning one of three seats on the Port San Luis Harbor Commission. As he watched the national race, he characterized his impending victory as “bittersweet.”

“I would much prefer if Hillary won and I lost,” he said. “I just can’t believe that 50 million people thought that Trump would make a good president.”

More than 20 miles north at the SLO County Republican Party’s headquarters in Atascadero, the mood was very different. Party Chair Al Fonzi said attendees at the election night party were “on the edge of their seat” until Trump began to win the battleground states.

“When it broke, there was just pandemonium,” Fonzi said. “They were ecstatic. Very, very happy.”

In the days leading up to the election, Fonzi said volunteers were working hard for Trump and other Republican candidates, making thousands of phone calls. He characterized Trump’s supporters as “energized,” noting that some drove to the Atascadero office from places as far away as Nipomo, Santa Barbara County, and even King City, to get Trump campaign paraphernalia.

“They have strong opinions and are highly motivated,” he said.

One such supporter is Atascadero resident and avid Trump voter Dane Sensor. In an interview with New Times Nov. 9, Sensor said he’d marked his ballot for Trump, and left the rest of it blank.

Sensor said he believed that people would be “surprised’ by how much Trump will help the country during his presidency, and added that he planned to hold the presumptive president to his election promises, particularly on immigration.

“No. 1, keep your promise on the wall,” Sensor said, referring to Trump’s oft-cited claim that he will build a wall along the U.S. border with Mexico.

Not everyone is as happy as Sensor about Trump’s likely presidency. Throughout his campaign, Trump repeatedly made disturbing comments about minatory groups, including referring to Mexicans as “rapists,” and calling for a ban on Muslims traveling to the United States. Trump’s campaign was also marked by racially divisive rhetoric, earning him the praises and endorsements of white supremacist groups and former Ku Klux Klan leader David Duke.

When asked if groups like Muslims, Latinos, and African-Americans should be concerned about a Trump presidency, Sensor indicated that they shouldn’t worry.

“They should feel safer than ever,” he said.

Those words are likely little comfort to Harris. Trump’s campaign was filled with controversial comments about women. During his campaign, Trump was dogged by multiple allegations from women that he sexually assaulted them. Previously unaired footage from Access Hollywood caught Trump bragging about groping women’s genitals.

When asked at the election night party how she felt, as a woman, that the American electorate had chosen Trump as the next president, Harris shook her head.

“If I talk too much longer, I’ll start to cry,” she said.