Truth, in the pleasant disguise of illusion 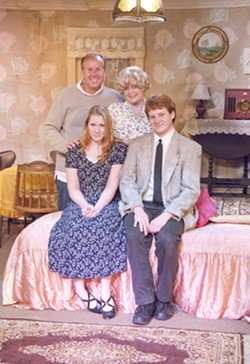 Part of the beauty of The Glass Menagerie is in knowing that the characters appear not as they actually are, but as they seem through the looking glass of Tom Wingfield’s recollection. It’s a glass warped by time, stained by emotions, splattered with opinions, and slightly cracked, perhaps, by childhood traumas.

Menagerie, directed by Nehemiah Persoff, is a memory play, as Tom explains in his opening soliloquy. That the events on the stage happen as Tom remembers them helps to excuse any of the play’s improbable elements. (“In memory, everything happens to music,” Tom tells us by way of example.)

“Yes, I have tricks in my pocket, I have things up my sleeve,” Tom (played by Joe Eister) admits from his perch on the fire escape. “But I am the opposite of a stage magician. He gives you illusion that has the appearance of truth. I give you truth in the pleasant disguise of illusion.”

Set in the late ’30s, The Glass Menagerie never leaves the four walls of the Wingfield family’s creaky St. Louis apartment—much like Tom’s sister Laura (Christina Fountain), who spends most of her time playing with her collection of glass animals. But despite, or perhaps because of, the play’s limited setting, Menagerie’s rich drama thrives, quickly drawing the audience into the hopes and fears of the Wingfield clan. Will Tom, Amanda Wingfield’s son, ever give up his habit of “going to the movies” at all hours of the night, stumbling home, thoroughly plastered, at 3 a.m.? Will Amanda, a fading Southern belle, ever find a gentleman caller for her “jobless, crippled daughter?” These questions hang in the stuffy apartment air like dust refusing to settle.

The characters of Menagerie seem made to highlight one another’s bad qualities, and Eister’s Tom is a wonderful foil to Turnbow’s Amanda. She pesters and demands—“Sit up straight!” and “Chew your food thoroughly!”—and he glumly acquiesces until he reaches his personal breaking point and explodes, which, to Amanda, seems to come out of left field.

As the matronly, nagging, often inappropriately flirtatious Amanda Wingfield, Jill Turnbow doesn’t hold back—to hilarious effect. Williams gives Amanda nearly twice as many lines as the play’s other three characters, though with all her blustering, she seems to deliver about the same amount of information. Sometimes, though, Amanda comes out with gems like this, used to chastise her son Tom: “You are the only young man that I know of who ignores the fact that the future becomes the present, the present becomes the past, and the past turns into everlasting regret if you don’t plan for it!”

Much of the first act is slow going, but as Amanda’s obsession with finding a gentleman caller for Laura intensifies, so does the pace of the play. Act I finishes in a flurry of preparation for the arrival of a real, live gentleman caller, Jim O’Connell, who has agreed to come to dinner at the Wingfield’s home.

Having got to know the Wingfields so well over the past hour or so, we too are shocked, then curious: Who is this handsome outsider barging into our cozy little play about an unhappy family? Jim, played by Kasady Riley, brings a fresh perspective into the cramped Whitefield residence. Charismatic and easygoing, Jim seems immune to the anxiety and desperation that generally permeates the household. In his presence, the Wingfields seem to become exaggerated versions of themselves. Amanda stuffs herself into a fancy dress from her days of Southern grandeur and flirts aggressively. Laura, realizing Jim is her old high school crush, loses consciousness and collapses in a heap. Only Tom seems to hold himself together. Or at least he remembers it that way.

The final scene contains the play’s most electric, hopeful moment. Time seems to slow down. Arts editors abandon their notepads and pens. The audience gets butterflies in its collective stomach.