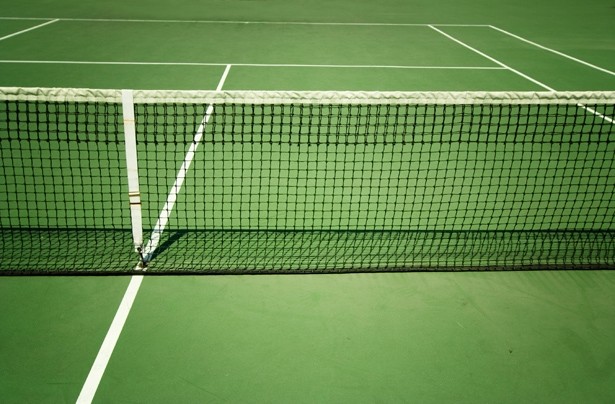 Whether you grew up on the Central Coast, recently moved here, or find yourself passing through, you’ll find there’s one sport that exemplifies the pace of life here: It’s that age-old, one-on-one battle known as tennis. I’ve taken time to seek out and list some local venues that provide excellent playing surfaces, consistent competition, free or open play, and positive atmospheres.

Let’s start south in Grover Beach, at the corner of Eighth Street and Atlantic City Avenue, where two well-lighted, even-surfaced tennis courts—part of a project to improve the area adjacent to an elementary school—definitely pass muster. Eighth and Atlantic is a great beginner’s court, because the number of kids in and around there, even after school hours, gives it a true sense of safety, and of the dozen or so park-goers I met, three were coaches (one tennis). These courts let Grover Beach youth and others get a healthy handle on tennis in a secure, picturesque neighborhood.

Turning southwest, the green asphalt at the corner of Trouville Avenue and Fourteenth Street feels lonely, but the players living nearby who show up on a daily basis represent the best Central Coast tennis. While walking around this pine-shaded corner, I encountered five players who call this court their second home. In a group comprised of tall, lanky, short, stocky, and skinny players, these regulars looked like ordinary tennis junkies but had vocal prideful games just rough-and-tumble enough to make you feel challenged.

In the middle of battle I learned the court’s downfalls are the occasional nuisance of pine needles and a slight ocean-facing slope. But the lights stay on until 9 or 10 p.m. and the court does attract quality players. This is the place to play if you like spirited forty-something trash talk and would enjoy retiring to secret dive bars after games.

Traveling to breezy Pismo Beach, there’s a court behind chain-link fencing at Brisco and Bello Roads, next to the Pismo Beach Police and Fire Departments: It’s been the scene of some serious stress-reducing, ball-thwacking battles. The strangely colorless Brisco Courts are not particularly inviting but they are merely blocks from the ocean. And you could gain a measure of revenge against the cop who ticketed you for speeding 10 miles per hour over the limit when you had only 15 minutes for lunch! The place has a fine, smooth surface and the ocean wind definitely cools down aching joints, allowing longer games.

The jewel of my list is the most famous Central Coast venue; the cliff-side clay courts along Pacific Coast Highway just south of Dinosaur Park in Shell Beach. With constant upkeep on one of the few Australian-style tennis grounds around, and a local tennis association controlling the crowds who want access, it’s not easy to get a game here for the pick-up tennis player.

Your best bet to get in on the action is to contact the Grover Beach Tennis Association, who play here on Wednesday and Sunday mornings from 9 a.m. to 12 p.m. Honestly, though the idea of pebble-infused skin burns caused by knee and elbow dives doesn’t enthuse me, the natural grandeur of this place is very alluring.

Stepping on this gravelly surface with the whole Pacific at their backs and gusts of salty air rushing over their shoulders as they serve, I’m sure the top-notch players must feel as though the Earth amps up their aces. For me, just serving on the clay aided by that raw force is a thrill.

Not far to the north is another tennis sanctuary just beyond the Cliffs Hotel; two hard courts on the right along Shell Beach Road/Pacific Coast Highway. Hardly a day goes by, barring rain, when this venue isn’t occupied for hours at a stretch. I drove by five times in two days at different hours and saw many, many players. It’s immediately evident why they are so populated. The courts are well kept—no pine needles or eucalyptus leaves—and are more protected from the wind than the clay courts. If you want to play without delay this might not be the best place, but if you’re looking for competition and a mixture of solid veterans and beginners, check out these hard courts.

I’ll contribute another commentary about more courts farther north. Try these for now. Peace and good play can be found across their nets.

Daniel Corpuz is eager to sharpen his game. Contact him via the editor at econnolly@newtimesslo.com.