'Tulip Fever' looks at the risks of love, gambling

by Ryah Cooley and Karen Garcia

Editor's note: This week's Split Screen was written by Arts Editor Ryah Cooley and Staff Writer Karen Garcia while Glen and Anna Starkey were off on vacation.

From director Justin Chadwick (The Other Boleyn Girl) and writer Tom Stoppard (Shakespeare in Love) comes Tulip Fever, set in 17th century Amsterdam. An orphaned girl (Alicia Vikander) is married off to a rich and powerful merchant (Christoph Waltz). After her husband commissions a portrait, she begins a love affair with the painter (Dane DeHaan), a struggling young artist. The lovers risk everything and enter the tulip bulb market, with the hope that the right bulb will make them a fortune and buy their freedom. (107 min.) 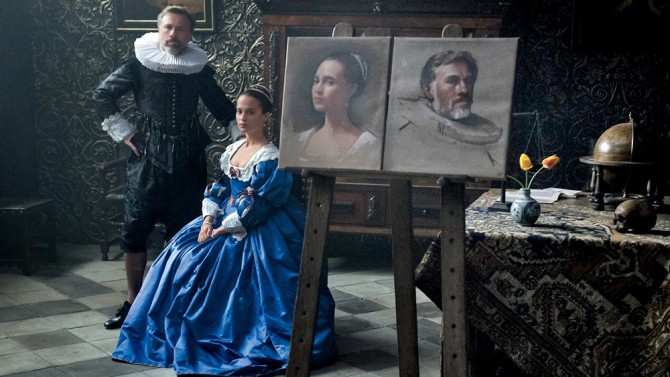 Ryah: While Tulip Fever is being hailed by many as a "sexy thriller," to me it reads more like a dark comedy. In terms of visual aesthetics (which are stunning) and humor, it reminded me a lot of a Wes Anderson film. Sophia (Vikander) is presented as the story's protagonist when as a teen orphan, living at a nunnery with few options, she's essentially sold to be the wife of the wealthy and much older merchant Cornelius (Waltz). The film is narrated by Maria (Holliday Grainger), Sophia's servant, for reasons that become clear later in the film. While Cornelius isn't purely a bad man or husband, he essentially rescued Sophia from poverty and married her so she would give him a child. Three years later, with no baby still, he nonchalantly speaks to a friend about possibly "letting her go" in another six months. We go a good chunk of time into the film before even hearing Sophia really say much of anything, which is disheartening since most of the action seems to revolve around things happening to her. Her mirror opposite is Maria, who, while unmarried and poor, is relentlessly cheerful and hopelessly in love with William (Jack O'Connell), the fishmonger. In order to save enough money to get married and live well, William decides to take his savings and gamble in Amsterdam's chaotic and insane tulip market. Think Wall Street, but with no computers and deeds to tulips (that have yet to even sprout out of the ground) being awarded to the highest bidder, with lots of drunken brawls thrown in for good measure.

Karen: Sophia is supposed to be the protagonist of the film, but her silence makes it difficult to root for her. At the start of her marriage, you feel somewhat sorry for her when Cornelius and his "little soldier" pester her every night for a child—of course infertility is always the female's fault, but let's remember that Cornelius is an older man. But sympathy is lost when her husband contracts an ambitious young painter Jan Van Loos (DeHaan) to memorialize the couple via portrait. The painter gives Sophia a look and a feeling that she has never felt before, but love at first sight bears no mercy for these two. A regular Romeo and Juliet forbidden-love story forces them to hide their affair. On one of these occasions, Sophia wears Maria's cloak on her way to see Jan, and William mistakenly believes Maria is having an affair. The betrayal he feels sends him into a spiral at the local pub where he's robbed of his earnings from the tulip market, gets into a brawl, and is then sent to serve in the navy as punishment. Maria is left alone and with child. After confiding in Sophia of her misfortune and worrying that she'll be thrown out for having a child out of wedlock, Maria threatens to tell Sophia's secret. The lies only continue to take more twists and turns from there.

Ryah: With Tulip Fever, you're really getting a Shakespearean comedy and tragedy all in one. The ridiculous manipulations and ruses that escalate would be purely comical if the consequences weren't so dire. We won't give many more plot details, as going further would really give away the twist of the film (which is a doozy!), but it's safe to say that while everyone doesn't necessarily get a happy ending here, each of the characters evolve in their own way. We see a softening of Cornelius, and, through this, he finds the life and relationships he's always sought. Jan's work, in standard tortured artist fashion, is made truly great by his greatest personal tragedy. Sophia, for once, gets to choose her own path. Maria is perhaps the only character who ends just as she started: truly happy. The main cast members all deliver solid performances, and we also get some delightful little appearances from actors like Zach Galifianakis as Jan's hilarious drunkard of a friend, Cara Delevingneas the cunning harlot who steals William's money, Tom Hollander as the pervy doctor who helps the scheming ladies, and dame Judy Dench as the shrewd abbess who has a hand in the tulip market.

Karen: The characters in this film all have one thing in common: a rise and fall with the ambition to get ahead. We see William rise with the purchase of a tulip parcel, Jan with his later investment in the tulip frenzy, Maria and her innocent love, Sophia and her affair, and Cornelius with his chance at a child. But everyone's pursuit of happiness is cut short even if their intentions are pure. All these actors really deliver stellar performances, staying true to their role in the story. It's interesting to see how the actions of these individuals affect each other; the lives of these four are really intertwined. Often we watch films to root for characters that are flawless, but these characters have relatable imperfections that make the story better. Driven by love, success, and the pursuit of happiness, Tulip Fever is a must see if you aren't into cookie cutter happily-ever-after endings. Δ