A long, tense silence takes hold at the Los Osos Community Services District's (CSD) Feb. 6 board meeting as directors start a discussion about yet another CSD water customer's appeal of an abnormally high bill.

This 16th Street resident is the sixth customer in as many months to come before the board to protest their bill (in this case, a $2,022 one), and the directors appear to be at a loss for words on the whole issue.

"All I've heard is that this is troublesome," says President Chuck Cesena, while he scans the dais for directors to make comments. 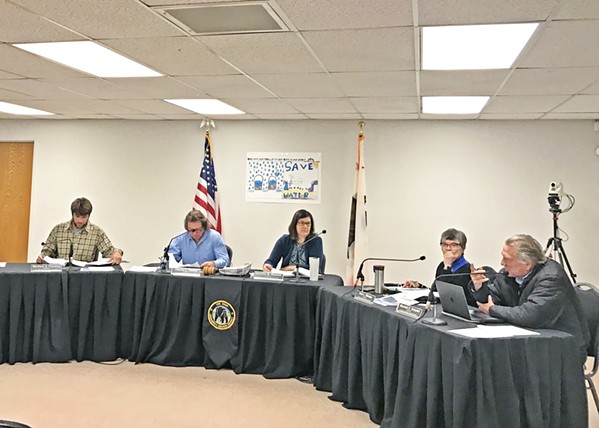 Exorbitant Los Osos water bills as high as $2,675—an amount equivalent to 177,276 gallons of water usage over 60 days—are shocking CSD customers and forcing the district to look at new policies and programs to address what's become a recurring issue.

"It's just really strange," Lars Lindgren, a local dentist who received a $1,213 water bill in September at his office, told New Times. "It just spiked up and now it's back down. I've had my plumbers out here. There's no leak or anything. ... Something's happening."

The high bills are scattered around town, and many remain unexplained. The CSD believes its water meters, most of which are new, are accurate. But in five of the six recent cases, there was no verifiable leak to point to. And perhaps more confounding, like Lindgren, the customers' water use returns back to the normal range the following billing cycle.

"[Our bill] went right back to normal," resident Susan Schermerhorn said, "without changing any of our habits."

Schermerhorn and her husband's November bill came in six times higher than their usual $150 tab.

"If it had doubled, we might have said OK, we have to look at our usage," she said. "But at this level, it's just crazy. ... What we're really worried about is, is it going to happen again?"

In each of the recent cases of high water bills, the Los Osos CSD board has agreed to give the customers a credit that essentially cuts the excessive bills in half.

But the district knows that approach isn't sustainable and that it doesn't get to the root of the issue. In the coming weeks, CSD staff says it plans to develop a new policy to handle future cases, as well as look at how they can prevent them in the first place.

"I'd like to figure this out," CSD General Manager Ron Munds told New Times about the bills. "It's a real problem, and these are our paying customers."

In addition to creating a policy that will allow extreme water bills to be handled at a staff level instead of a board level, Munds said he's looking at starting a rebate program with Flume, a local company that makes a sensor device that can be installed on water meters. The device sends real-time meter data to customers' smartphones and can alert them by text or email about a possible leak. That leak notification can be based on overnight water use, for example, according to Ian Castillo, a Flume utility relations manager.

"Our true value is empowering your standard homeowner with this information," Castillo explained. "The main pain points are people with $1,000 water bills, and they don't know there's a leak."

Castillo said Flume has more than 15 partnerships with utility agencies like the Los Osos CSD—including a past pilot program with the city of SLO—where the utility offers a rebate to customers who purchase the $200 product.

Munds, the Los Osos CSD general manager, said he plans to meet with Flume representatives to explore a similar program for Los Osos.

The Los Osos residents who received high bills, though, are skeptical that leaks are the real issue. Lindgren, the dentist, noted how many customers are experiencing the problem under similar circumstances, and he said he thinks the CSD should take a comprehensive look at the situation, including how its own equipment might be contributing to it.

"It's not like it's anybody's fault, but we need to think outside the parameters we're using to figure out an answer for it," Lindgren said. "If this kind of thing hits somebody on fixed income or low income, it could really sink them."

Los Osos CSD Director Matthew Fourcroy disagrees with this view of the source of the problem. At the Feb. 6 meeting, Fourcroy said he's confident that the cases of high bills are "an issue on [the customer] side of the meter."

"My standpoint is it's not a mystery where the water went," he said.

In urging residents to be diligent about checking their meters and fixing leaks, Fourcroy noted that even a small leak from a toilet or irrigation line could add up significantly over a 60-day period.

"I think we're all looking for a firehose here, but really what we're looking for is something barely flowing," he said.

Whether the spree of high water bills in Los Osos is merely a coincidence of leaks or something stranger, its cumulative impact is adding up.